Please ensure Javascript is enabled for purposes of website accessibility
Log In Help Join The Motley Fool
Free Article Join Over 1 Million Premium Members And Get More In-Depth Stock Guidance and Research
By John Rosevear – Updated Apr 23, 2019 at 11:14AM

Shares of Indian automaker Tata Motors (TTM 2.23%) had a rough day on Thursday. Tata's share price fell as much as 11% after the company announced the worst quarterly loss in its history on woes at its British luxury-vehicle subsidiary, Jaguar Land Rover.

Tata said that it lost 269.93 billion rupees ($3.78 billion) in the quarter that ended on Dec. 31, the third quarter of Tata's fiscal year. That loss was more than explained by a one-time impairment charge of 278.38 billion rupees ($3.9 billion), reflecting diminished future expectations for its Jaguar Land Rover (JLR) subsidiary. 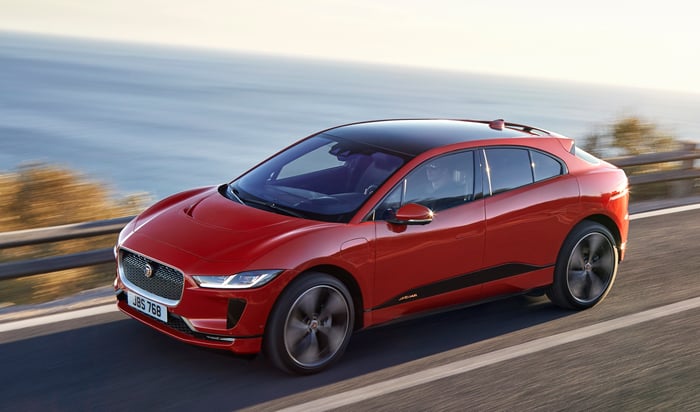 Jaguar I-Pace sales have been good, but just about everything else at JLR headed downhill in 2018. Image source: Jaguar Land Rover.

JLR, which said in a separate financial report that it lost 3.4 billion British pounds ($4.4 billion) in the quarter, is suffering from several different problems at once:

JLR saw steep sales declines for several models in the quarter, including some of its newest vehicles. (An exception: The electric Jaguar I-Pace has done quite well in its first few months on the market -- but because it's manufactured by Magna International under contract, JLR's profit margin on the I-Pace is likely very slim.)

The company said in January that it will cut about 10% of its global workforce, with most of the cuts taking place in the U.K.

Tata also cut its guidance for the full fiscal year, which will end on March 31. It had previously said that it expected to roughly break even on an operating basis for the full year, but it now expects its operating margin to be "marginally negative."