Wells Fargo (NYSE:WFC) experienced massive system failures beginning midday on Thursday, which left many of its customers unable to access their bank accounts. The bank's data centers and other internal systems were out as well, according to reports by bank employees. The cause wasn't a data breach -- rather, the outages were a result of a shutdown at one of the bank's facilities.

It took a long time for the bank to get its systems up and running. By late Thursday, services still hadn't been fully restored. According to The Wall Street Journal, a Wells Fargo executive said the bank expected that it would take another day to get all systems functioning properly. 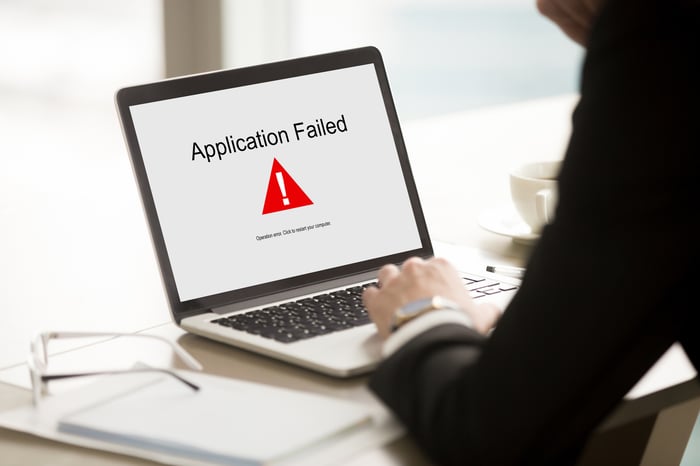 As can be expected, many customers were not happy, especially those who needed to access their accounts to pay bills or to conduct other business. For example, CBS News reported that one Twitter user was scheduled to close on their house and was worried about being able to access the system. Other customers were upset over a lack of updates during the day and the bank's seemingly slow progress in restoring its system.

Another ding to Wells Fargo's image

If you've followed the financial news at all in the past few years, you've probably heard about at least a few of Wells Fargo's numerous scandals and resulting settlements and penalties.

It all started in September 2016, when it was revealed by the Consumer Financial Protection Bureau, or CFPB, that Wells Fargo employees had opened two million phony deposit and credit card accounts that were unauthorized by consumers. And, this figure was later revealed to be even higher, with the number of fake accounts revised upward to a staggering 3.5 million. Among other financial penalties, this resulted in a $480 million settlement of a securities fraud lawsuit, which alleged that the bank knew about the scandal but failed to disclose it to investors.

In addition, the bank has faced scandals involving:

Shockingly, this isn't a complete list. To say that Wells Fargo has had a scandal-packed few years would be a massive understatement.

As a result of its misbehavior, the Federal Reserve imposed an unprecedented growth restriction on the bank, prohibiting it from growing its assets beyond its year-end 2017 level until "substantial improvements" were made.

The bank is trying to make it right, but...

To be fair, Wells Fargo is doing what it can at this point in order to make the situation right. The bank already apologized to its customers and said that any fees that hit customers' accounts as a result of the outages will be reversed.

However, the bottom line is that a massive outage that makes headline news is the last thing Wells Fargo needs while it's in the process of trying to rebuild its public image and while it's trying to convince the Fed that it has made sufficient improvements and should be allowed to grow once again.