Please ensure Javascript is enabled for purposes of website accessibility
Log In Help Join The Motley Fool
Free Article Join Over 1 Million Premium Members And Get More In-Depth Stock Guidance and Research
By Keith Speights – Updated Apr 18, 2019 at 11:27AM

The biggest financial updates ever for these marijuana growers are just around the corner.

Two of the biggest marijuana companies in the world have what are arguably their most critical quarterly updates ever coming up next week. Aurora Cannabis (ACB -0.75%) announces its fiscal 2019 second-quarter results after the market closes on Monday. Canopy Growth (CGC 4.57%) will update investors on its fiscal 2019 third-quarter results after the market closes on Thursday.

These quarterly updates are so critical because they'll be the first to include results from the early days of the launch of the Canadian recreational marijuana market. Here are four things you can expect when Aurora and Canopy report their results. 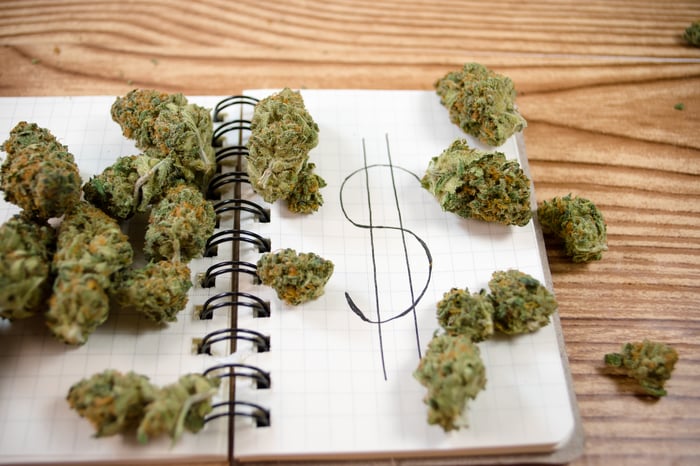 You can bet the ranch that both Aurora Cannabis and Canopy Growth will report record-high revenue in the upcoming quarterly updates. Actually, we already have a ballpark number of what to expect from Aurora since the company gave a sneak peek of its Q2 results several weeks ago. Aurora's guidance called for revenue between 50 million and 55 million in Canadian dollars, by far its highest sales ever.

Canopy Growth didn't provide guidance for its fiscal third quarter. However, it seems reasonable to expect that the company's sales will increase by around 70% over its Q2 revenue -- perhaps in the ballpark of CA$40 million. And that could be a lowball estimate since Canopy's Q2 sales were lower than in Q1 partially due to issues in the German medical marijuana market.

Aurora Cannabis reported a huge profit last quarter. Canopy Growth posted its biggest loss ever during the same period. Those numbers were deceiving, though. Aurora benefited from a big one-time investment gain while Canopy had huge stock-based compensation expenses. The reality is that both marijuana growers continue to lose money. And that won't change when they report their quarterly updates next week.

However, you can expect both Aurora and Canopy will make progress toward sustained profitability. Aurora thinks that it will be on track to deliver positive EBITDA by the second quarter of the calendar year 2019 (the company's fiscal Q4). Canopy CEO Bruce Linton said in his company's last quarterly conference call that gross margin should begin improving in its fiscal Q3.

Although Aurora and Canopy will no doubt announce tremendous year-over-year revenue growth, sales will still be much lower than they should be down the road because of limited supply. Both companies, though, are cranking up their production capacity. Expect to hear important updates on what's happening on that front.

Aurora was at an annualized production run rate of 70,000 kilograms in November but has plans to increase its capacity to 150,000 kilograms in the near future. Canopy Growth's BC Tweed and Vert Mirabel facilities were only partially licensed in the company's fiscal Q2. Both companies should report good news on boosting capacity.

Even more important than their performance in the latest quarter will be Aurora's and Canopy's discussion of plans for the rest of 2019. Each company has made moves to prepare for the anticipated opening of the Canadian market for cannabis beverages, edibles, and concentrates, as well as expanding internationally.

It will be especially interesting to hear more about the two companies' plans for the U.S. hemp market. Canopy Growth recently announced that it will build a large-scale hemp production facility in New York state. Aurora hasn't provided many details yet on its plans for the U.S. hemp market, although Chief Corporate Officer Cam Battley said in November that the company "love[d] the opportunity" created by the legalization of hemp in the U.S.

There's one thing that really won't matter regardless of what Aurora Cannabis and Canopy Growth report next week: How close their results are to analysts' estimates. You might wonder why that should be the case since most stocks move higher or lower after their quarterly updates based on whether or not they met analysts' expectations.

When Aurora provided its guidance in January for the upcoming fiscal Q2 results, the company's top end of the projected revenue range was well below the consensus analyst estimate. Aurora's share price climbed anyway.

More important, though, performance against quarterly estimates simply isn't important for long-term investors. And with Aurora Cannabis and Canopy Growth, a long-term perspective is what every investor should have.