Americans are riding passenger trains more often than they used to. According to data compiled by the U.S. Department of Transportation, the total miles traveled by Americans via commuter and light rail services grew by 34% from 2000 to 2015. This stands to reason -- trains can be a solid kick-up-your-heels-and-ride alternative to cars and airplanes for both short and long trips.

Attempting to capitalize on this opportunity is Virgin Trains USA, operator of a passenger rail service in Florida, which will soon launch an initial public offering (IPO). Here's a look at this issue.

A Virgin-branded train in the U.K. Image source: Virgin Trains.

In the U.S., passenger rail service is mostly the province of federal or local government bodies (Amtrak is a good example). A glaring exception is Brightline, a private company currently in the process of being rebranded as Virgin Trains USA with the involvement of U.K.-based Virgin Group.

A famously sprawling conglomerate, Virgin has a brand that currently graces a train operation in the U.K. A Virgin Group affiliate will own a small minority stake in Virgin Trains USA.

Brightline/Virgin Trains USA operates a Miami-Fort Lauderdale-West Palm Beach route linking those three busy Florida cities. That route will connect with a planned "north segment" of service that's to stretch from West Palm Beach to Orlando. The company then aims to extend this line from Orlando to Tampa. 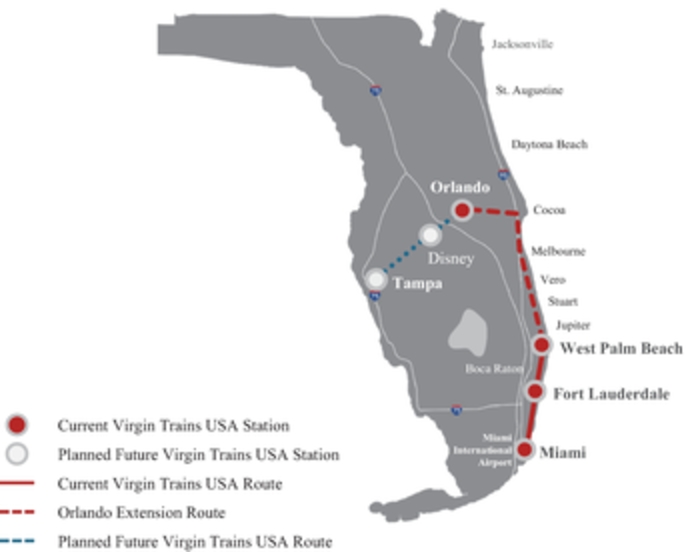 The company also owns the stations it uses in the three cities; another being planned for Orlando International Airport is to be owned by the airport and leased to the company.

On the West Coast, Brightline/Virgin Trains USA has also acquired the right to build a high-speed passenger rail service between Las Vegas and Victorville, California. The idea is to extend service from Victorville to Los Angeles. No infrastructure projects have yet been undertaken for this route.

Given the DoT figures cited above, the timing is right for this IPO. On top of that, the incumbent of intercity rail, Amtrak, recently notched an all-time annual record for ridership, at nearly 32 million in fiscal 2017 (2018's figure was lower, but only slightly).

Brightline/Virgin Trains USA seems to be ticking all the right boxes. Its trains and stations appear to be clean and comfortable, and online reviews generally give the service generally very good marks. Plus, the routes the company services are at the sweet intersection of "too far to drive" and "too near to fly."

The problem is that owning and maintaining rail assets is ferociously expensive, and transporting humans isn't as lucrative as hauling cargo. The major and successful publicly traded rail companies -- Canadian National Railway (NYSE:CNI) and CSX (NASDAQ:CSX), to name two -- all concentrate on moving stuff rather than people.

There's a solid reason: Rail is a magnificent way for companies to move goods relatively quickly across often immense distances. An effective operator stuffing its trains can bring in streams of revenue, and Canadian National Railway and CSX do this job well. Both have lately managed to grow their revenue and land well in the black on the bottom line.

Passenger rail is a different beast. Look at Amtrak: Its recent record-setting aside, the company consistently posts an operating loss. Brightline/Virgin Trains USA booked a shortfall of over $87 million in the first nine months of its inaugural revenue-producing fiscal year (2018), with a top line of only $5.2 million. Yes, it's only year one and revenue will surely grow along with popularity, but huge construction costs loom.

Many people would love to see a viable alternative to the car and the airplane. The thing is, though, that passenger rail is a hard endeavor to make viable, hence its frequent subsidization by government bodies. And as far as the investment community is concerned, a Canadian National Railway or CSX offers profitability, stronger cash flow, and a more vibrant revenue stream.

Ultimately, as a traveler and a person concerned about our dependence on the car, I want Virgin Trains USA to succeed and thrive. As an investment writer, I wouldn't bet on that happening.

Virgin Trains USA shares are scheduled to start trading on the Nasdaq Wednesday, Feb. 13, under the ticker symbol VTUS. Just over 28.3 million shares will be sold in the IPO, at a price between $17 and $19 per share.