The fast-casual Mexican chain's recovery strengthened last quarter, but it will need to grow sales even faster for Chipotle stock to keep climbing.

Chipotle Mexican Grill's (CMG 0.13%) turnaround took another step forward last quarter, as comparable sales growth accelerated on the back of rising digital sales. This growth enabled Chipotle to post adjusted earnings per share of $1.72 for Q4, nearly 30% ahead of the analyst consensus.

Not surprisingly, investors cheered this big earnings beat. Chipotle stock jumped more than 11% on Thursday, briefly surpassing $600 for the first time in more than three years. 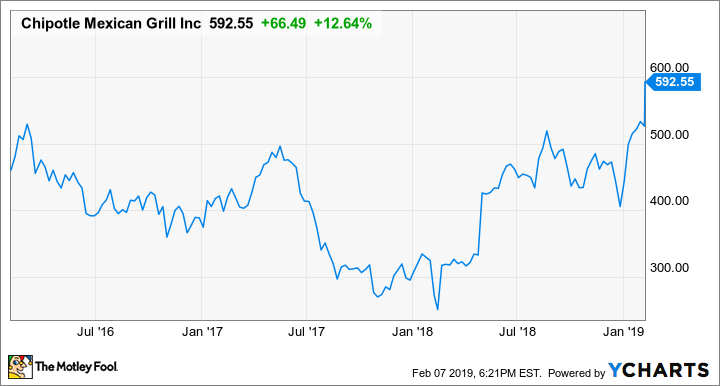 Chipotle's growing momentum and the numerous sales-driving initiatives it has in the pipeline should allow the fast-casual pioneer to achieve strong earnings growth over the next few years. But without further acceleration in its comps growth, Chipotle will have trouble living up to its lofty valuation.

An excellent end to the year

In the third quarter, Chipotle posted 8.6% revenue growth on a 4.4% increase in comparable restaurant sales. Adjusted EPS surged 62% year over year, thanks to strong cost control.

However, skeptics weren't impressed by those results, noting that comparable restaurant traffic declined 1.1%. Higher menu prices and larger order sizes, spurred by the late 2017 addition of queso to the menu, drove more than 100% of Chipotle's third-quarter comp sales growth. The fear was that these tailwinds would fade in the fourth quarter, dragging down Chipotle stock.

While revenue growth accelerated in the fourth quarter, Chipotle posted a fairly pedestrian 11% increase in adjusted EPS, roughly in line with its sales growth. Higher marketing and promo costs from an ad campaign and free delivery promotion, extra costs related to the growth of Chipotle's delivery business, and higher depreciation and amortization expense driven by store upgrades offset cost savings elsewhere in the business.

Can Chipotle keep the momentum going in 2019?

Chipotle expects comp sales trends to remain strong in 2019. The company is projecting full-year comps growth of 4% to 6%, with a modest 1.7-percentage-point lift from higher menu prices. This outlook implies that traffic growth will continue to accelerate. That was probably a big reason behind Chipotle stock's rally on Thursday.

On the other hand, Chipotle has slowed the pace of its expansion. It plans to open 140 to 155 new restaurants this year, an increase of roughly 6%, whereas it was growing its restaurant count at a double-digit rate just a few years ago. Furthermore, these restaurant openings will be weighted to the second half of the year. That means Chipotle's revenue is likely to grow less than 10% in 2019.

Furthermore, Chipotle expects most of its major cost categories to grow in line with sales this year. The only major source of margin expansion will be on the general and administrative expense line, where management expects to realize substantial savings. As a result, while Chipotle's pre-tax margin is likely to expand again, it is on track to remain below 10% in 2019.

Time to lock in some gains

Back in early 2017, I argued that Chipotle stock could rise to $1,000 or more by 2022, driven by a combination of steady expansion and a rebound in average sales per restaurant to 2015 peak levels or higher.

Since then, average restaurant sales have increased, but only by 4%, to just above $2 million. That's still well below the peak average unit volume of more than $2.5 million achieved in the 12 months ended on Sept. 30, 2015, just before Chipotle's food-safety crisis spiraled out of control. At that point, Chipotle's pre-tax margin was 19%.

Even if the company hits its targets this year, its pre-tax margin will be just half that level. This potential outcome highlights the paramount importance of high unit volumes for achieving margins anywhere close to what Chipotle used to produce.

The good news is that Chipotle still has lots of levers for driving further comps gains, such as launching new menu items, increasing restaurant throughput, boosting customer awareness of its delivery options, and leveraging an upcoming loyalty program. These efforts could potentially accelerate Chipotle's sales growth in the coming years, helping it expand its profit margin faster.

That said, Chipotle now trades for 45 to 50 times its expected 2019 earnings. That's a very high valuation for a company that has slowed its store expansion and is barely growing its restaurant-level operating margin. I'm not giving up on Chipotle stock, but I do plan to lock in some gains next week, as the risk-reward trade-off is much less favorable than it was a year or two ago.