Please ensure Javascript is enabled for purposes of website accessibility
Free Article Join Over 1 Million Premium Members And Get More In-Depth Stock Guidance and Research
By Eric Volkman - Updated Apr 23, 2019 at 11:41AM

The folks who keep your home secure have added $0.06 to their stock's quarterly payout.

One of the most pleasing events for a stock investor is a dividend raise. Most raises are modest, but not for security hardware specialist Allegion ( ALLE 0.61% ). The company's board just ratified a hefty 29% lift to its quarterly payout.

Here's a look at what's behind the lift, and whether it makes the stock an attractive buy candidate. 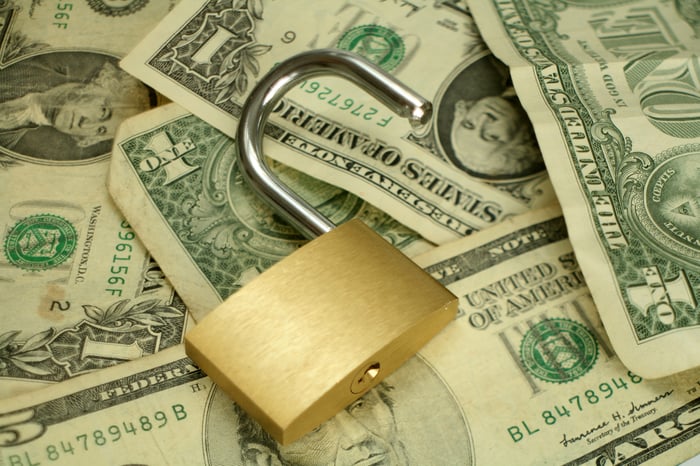 First, the details. Allegion's new dividend will be $0.27 per share, a $0.06 improvement over the most recent distribution. The upcoming payout is to be disbursed on March 29 to stockholders of record as of March 15.

Alas, that 29% increase still doesn't make the stock a high yielder. At the new rate, the yield would still be only 1.2%. That's well under the current 2% average of dividend-paying stocks on the S&P 500 index.

You might not know Allegion by name, but there's a strong possibility you've come across its products. The company owns a set of brands, the most recognizable of which is probably the popular Schlage family of locks and associated devices. Allegion was once the security hardware arm of industrial conglomerate Ingersoll-Rand ( TT 1.44% ), before being spun off in late 2013.

Given that it's an industrial company, Allegion has been delivering net margin higher than you might expect. Margin stood at 11% in the most recently completed fiscal year, and just over 10% the year prior. Meanwhile, revenue climbed in both of those frames; from fiscal 2015 to fiscal 2017 it climbed from just over $2 billion to $2.4 billion.

Helping to power this growth is a combination of the still-growing U.S. construction market and the ascent of the Internet of Things (IoT).

The connected home has become an increasingly more affordable, and therefore attractive, option for many owners. To feed demand for such solutions, Allegion has a full slate of locks and accessories with various forms of Web-based and/or IoT functionality. The company can benefit from both upgrade activities from existing users, and new installations in newly built residences.

Chip off the old block?

The U.S. construction market looks to still have some gas in the tank, as does the upgrade cycle, so Allegion is a play on those two dynamics. But the stock looks a bit pricey -- it currently trades at a forward P/E of just over 18. Yet the 10 analysts tracked by Yahoo! Finance who evaluate Allegion collectively believe it'll improve its per-share profitability by only 10% or so. (Revenue, meanwhile, is expected to rise by under 7%.)

Perhaps Allegion's consistency is worth a bit of a premium, but not that much. And although a 29% dividend raise will bring a smile to existing shareholders, I'm not sure it'll sell others on the stock with that 1.2% yield.

It's always an interesting exercise to compare spinoff companies to their former parents. Like Allegion, Ingersoll-Rand has been a steady if not explosive performer over the past few years. It's also active in more than just one business with promising potential for the future. Here's how the two stack up in terms of selected fundamentals and valuations -- I believe the edge goes to Ingersoll-Rand:

I believe Allegion is an effectively managed company that looks out for its shareholders, as this latest dividend raise demonstrates. Previous raises were also well in the double-digit percentages, so it's been showing a commitment to its shareholders for some time. However, the yield remains low for income investors, and the company's stock looks expensive for the fundamentalists.

Lastly, several of Allegion's key valuations and performance metrics don't match up to those of its former parent. That leaves me to ask: Why not just buy Ingersoll-Rand instead?

These Were the 10 Best Industrial Stocks of 2019

The 10 Best-Performing Large-Cap Manufacturing Stocks of 2019