Shares rose in sympathy with good earnings reports from the company's peers.

Shares of food equipment company Middleby (MIDD 1.56%) rose 14.5% in January, according to data provided by S&P Global Market Intelligence. In the absence of earnings from Middleby, or a direct peer such as Welbilt (WBT), or any major fundamental developments in the food equipment industry it's hard to draw firm conclusions for the move.

Suffice to note that Welbilt stock also had a strong month and other companies with segments exposed to the food sector, such as Dover (DOV 3.14%) and Illinois Tool Works (ITW 1.49%), had pretty good months as well. 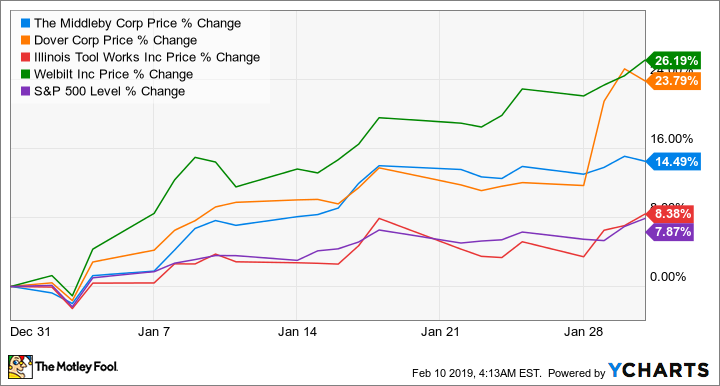 Delving deeper, Dover and Illinois Tool Works both reported earnings in January, and you can also look at data from industry bodies such as the National Restaurant Association. The latter matters to Middleby because the company generates around two-thirds of its earnings from the commercial foodservice equipment market -- the rest comes from premium residential kitchen equipment (around 20%) and food processing equipment (15%).

Illinois Tool Works's earnings report certainly gave succor to the bulls. The company's food equipment segment organic growth of 5% was the highest since the third quarter of 201, with North America up 7% led by equipment sales up 9% and food service up 11%. This bodes well for Welbilt and Middleby. 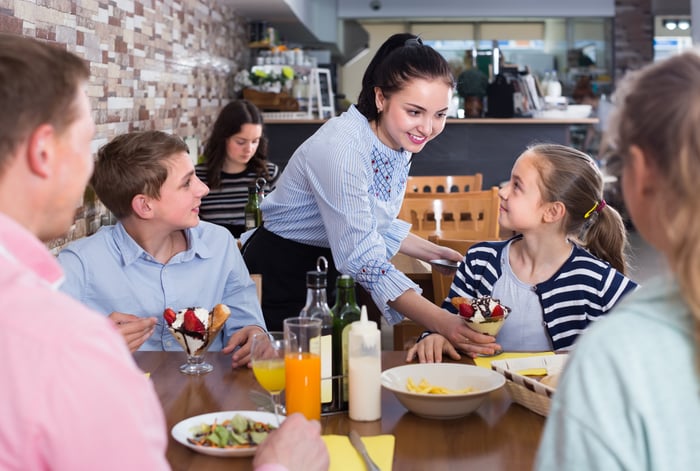 The situation is a bit more complicated at Dover. The company's refrigeration and food segment has underperformed for some time, and Dover is in the process of taking action (investing in automation to improve costs) to improve productivity at Unified Brands (commercial foodservice) so it's hard to get a fix on underlying trends there. Nonetheless, management claimed to be cautiously optimistic on the outlook for the segment in 2019.

Turning to the industry data, the Restaurant Performance Index -- the National Restaurant Association's index that monitors the health of the industry -- is indicating continued growth following a weak period in 2016-2017. For reference, a reading above 100 indicates growth. As you can see below, the industry appears to be in growth mode. 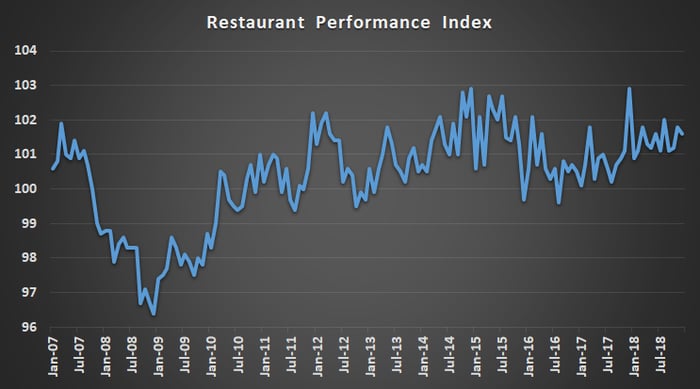 One swallow does not a summer make, but the results from Illinois Tool Works ad industry data suggests Middleby can return to the kind of mid-single-digit growth rate that CEO Selim Bassoul expects commercial foodservice to grow over the long term.

That would be good news because Middleby is a highly acquisitive company, and given that its current net debt to earnings before interest, tax, depreciation, and amortization (EBITDA) -- a key measure of liquidity that rating agencies to assess creditworthiness, where a multiple of no more than 2.5 times is seen as desirable -- currently stands at around 3.3 times EBITDA.

In other words, Middleby needs end market growth in order to grow cash flow so it can pay down debt.

Investors will be looking forward to the upcoming results and guidance from Middleby and Welbilt in the coming weeks in order to assess conditions in 2019. If they repeat what Illinois Tool Works reported in its food equipment segment, then they can both have good years.

Why Welbilt Stock Jumped Over 30% Today