Shares of Skechers (NYSE:SKX) recently soared after the company posted its fourth-quarter earnings report. Its revenue rose 11% annually to $1.08 billion but missed analysts' estimates by $20 million. However, its adjusted EPS grew 48% to $0.31 per share, beating expectations by $0.09.

Skechers stock has rallied more than 40% so far this year, but it could have more room to run for five simple reasons. 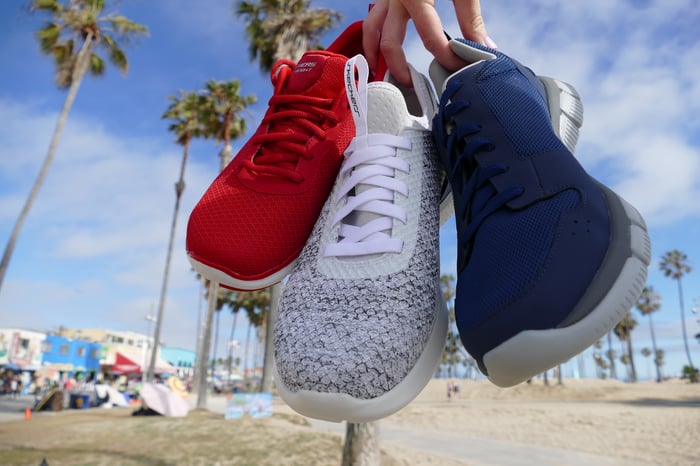 Skechers' 11% sales growth during the fourth quarter (14% on a constant-currency basis) marked its strongest sales growth in three quarters. Its gross margin dipped sequentially, but marked a 90-basis-point improvement from a year earlier.

Skechers doesn't directly compete against Nike and other athletic footwear makers. Instead, it offers a wide range of walking, work, casual lifestyle, casual dress, and athletic shoes for "everyday" consumers.

Skechers' emphasis on casual comfort is reflected in its ad campaigns, which feature Sugar Ray Leonard, Kelly Brook, and Big Papi instead of high-profile NBA stars. That strategy keeps Skechers' selling general, and administrative (SG&A) expenses, which rose just 8% annually last quarter, under control. That's why its operating margin rose from 5.7% to 7.7% between the fourth quarters of 2017 and 2018. For comparison, Nike's sales and administrative expenses jumped 14% annually last quarter.

Over the past few years, Skechers expanded overseas to reduce its dependence on the saturated US market. Skechers' international sales rose 18% annually during the quarter and accounted for 55.6% of Skechers' top line, up from 52.6% a year earlier. Its domestic sales rose 4%.

For the first quarter, Skechers expects its revenue to rise 2% to 4% annually, and for a 7% decline to flat growth in its adjusted earnings. That seems like a major slowdown from previous quarters, but it's the result of three major factors.

First, the timing of Easter will cause some of Skechers' sales to shift to the second quarter. Second, its growth in the prior-year quarter was boosted by a one-time tax benefit that increased its EPS by $0.07 per share. Lastly, Skechers is aggressively investing in the Indian market, which will throttle its near-term earnings growth but potentially boost its long-term revenue growth.

Skechers also repurchased about $100 million in shares (equivalent to about 2% of its current enterprise value) after launching its buyback program last year. It bought 3.7 million shares at an average price of $27.34 -- a 16% discount to its price as of this writing. It has $50 million left in that authorization.

Is Skechers a buy today?

Skechers is well-insulated from the ongoing battles between Nike and its athletic footwear rivals. It's growing its revenue and expanding its margins, its stock is cheap, and it's wisely repurchasing its stock at low prices. Therefore, I think investors who buy Skechers today could be well-rewarded this year as the shoemaker continues to rally.