It's fair to say BB&T is always buying something.

To say that BB&T (TFC 1.53%) is a serial acquirer would be an understatement. Its acquisition of SunTrust Banks (STI) will be No. 32 on the list of bank mergers or acquisition since 1999, which excludes myriad other nonbank deals the bank has done over the last 20 years.

Like most super-regional banking institutions with thousands of branches, BB&T has grown by acquiring smaller banks, but the targets have only gotten larger over time. As the SunTrust deal puts BB&T back in the spotlight (or sunlight, if you prefer), I thought it was a good time to revisit some of the biggest deals BB&T has made in recent years. 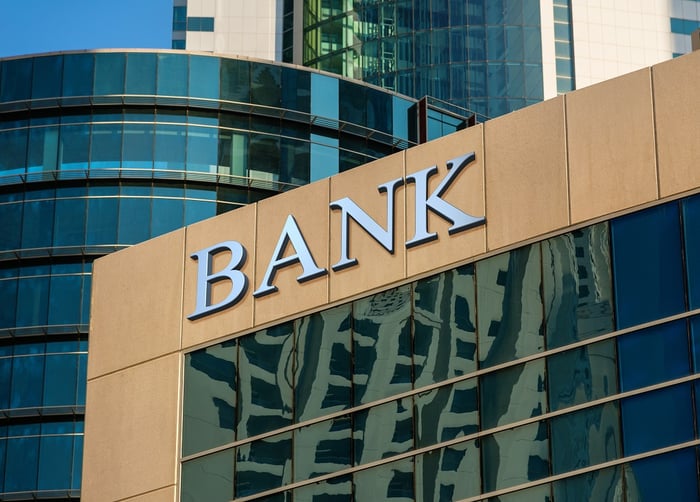 Because BB&T largely grows by acquisition, you can pick out many of its historical mergers and acquisitions in a map of its branch locations, which now span as far west as Texas and as far north as Pennsylvania, thanks to its habit of slowly expanding by buying banks on the fringes of its geographic reach.

BB&T's acquisition of Colonial Bank was unique in that it was an FDIC "special" of 2009, a bank purchased from the FDIC on privileged terms. Buying banks in a period of crisis can work well for the acquirer, given the loan losses that follow from acquiring another bank's loan book are generally shared with the FDIC. That's exactly what happened in this deal.

Colonial Bank was a massive Southern institution that had $25 billion in assets and nearly 350 branches littered across Alabama, Florida, Texas, and the areas surrounding Atlanta, Georgia, when BB&T acquired it. Highlighting its branches in the image below would have made a mess of the map, but suffice it to say that many of the Alabama and Florida locations you see are former Colonial Bank locations. 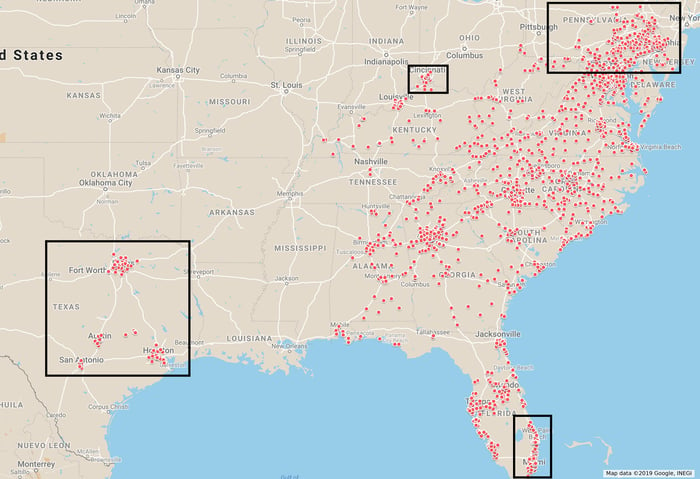 After Colonial Bank, BB&T went back to the bargain bin in buying troubled BankAtlantic in 2012. Stuffed to the brim with bad commercial real estate and construction loans made before the 2008 financial crisis, it sold its Tampa Bay-area branches to PNC Financial. Its branches on Florida's Atlantic coast were sold to BB&T.

This deal ran into a few hiccups. Originally, BB&T planned to buy its deposits and some of its assets in 78 branches, leaving behind a particularly troublesome portfolio of poorly performing loans. But creditors took issue with BB&T taking the good and leaving them to collect from the bad. A court's decision blocked BB&T from buying only the very best of what BankAtlantic had to offer.

Ultimately, BB&T and BankAtlantic's parent company worked out a deal in which the acquirer would assume some of the problem assets as well as their associated liabilities. The deal made BB&T a bigger player in the Miami, Florida, market, making it sixth largest by deposit market share, supplementing branches it took over in the acquisition of Colonial Bank.

Citigroup's branches in Texas were lost in the shuffle and needed new homes when, in 2013 and 2014, BB&T purchased 62 branches from Citigroup in two different deals, adding to 22 branches that survived from the Colonial Bank acquisition. Since then, BB&T has largely grown in Texas by opening new branches (what the industry calls de novo branches) rather than acquiring other Texas institutions.

Citigroup is the oddball of large money center banks, which primarily generate deposits through thousands of branches across the country. Citi has a "barbell" strategy, in which it lends to millions of U.S. households with its credit card operation while also focusing its efforts on large commercial and corporate customers on the east and west coasts of the United States. Branches in Texas weren't a good fit for Citi, but they were valuable to BB&T, which could add immediate scale to its Texas branch network.

4. The Bank of Kentucky (South of Cincinnati)

This bank's name wasn't necessarily fitting. It would have been better named "the Bank of Parts of Kentucky Just South of Cincinnati," given that it largely fed on the smaller Kentucky communities that are part of the Cincinnati metropolitan area. What makes this bank attractive was its strategic value.

The acquisition gave BB&T a foothold to dig into Ohio. While BB&T's version of scaled community banking works well with retail depositors and borrowers, its balance sheet also gives it the capacity to be the lender of choice for businesses too large to fit on Bank of Kentucky's balance sheet. With roughly $1.9 billion of assets and 32 branches, the Bank of Kentucky was more of a small add-on to BB&T than a needle-moving acquisition.

5. (and 6.) Susquehanna and National Penn (Pennsylvania and Maryland)

BB&T double dipped in Pennsylvania by purchasing Susquehanna Bancshares and National Penn Bancshares in back-to-back transactions that closed in 2015 and 2016, respectively. Susquehanna had 245 branches at the time of acquisition, and National Penn had 116. While BB&T had already expanded as far north as Maryland, these acquisitions helped it spill into Pennsylvania in a big way.

These acquisitions were right in BB&T's wheelhouse of acquiring smaller banks, keeping most of their deposits and loans while eliminating many of the duplicated branch and administrative expenses. BB&T aimed to eliminate 30% or more of each bank's noninterest operating costs shortly after acquisition, a promise on which it delivered.

Check out the latest BB&T and SunTrust earnings call transcripts.

A bank that's always buying something

The banking industry has been consolidating for more than three decades, as the number of commercial banks in the United States fell from 14,400 in 1984 to 4,746 in the third quarter of 2018. BB&T has done its part to help roll up the industry, acquiring 74 banks over that span. In addition, BB&T has also acquired a number of financial companies, including insurance agencies and nonbank lenders.

BB&T's merger with SunTrust is the bank's largest and the largest banking deal since the 2008 financial crisis. When combined, the bank will have $301 billion in loans and $324 billion in deposits and will rank as the sixth-largest U.S. bank by assets at $442 billion.

Size isn't its only aspiration. In becoming larger, BB&T hopes it can also grow more efficient, reducing its operating costs to roughly half of its net revenue, making it the leanest operator of any of the 11 largest banks with which it competes. Driving efficiency with acquisitions is something BB&T has done well on a much smaller scale, but the acquisition of SunTrust will test whether its acquisition-first model is truly scalable to big banks, not just small banks.