WisdomTree was up for sale as recently as December, but it may be running out of time to cash out.

Shares of ETF manager WisdomTree Investments (WETF 2.10%) popped on Monday after Bloomberg reported that the company was in talks to sell itself to JPMorgan Chase (JPM 2.02%) in December, though talks ultimately fell apart over price. That news was good enough to send shares up by more than 5% in active trading.

Those eager to buy in and get a hefty deal premium anytime soon may want to reconsider. It's my view that sale talks indicate that WisdomTree is realizing it's running out of time to cash out at an attractive price. Here's why. 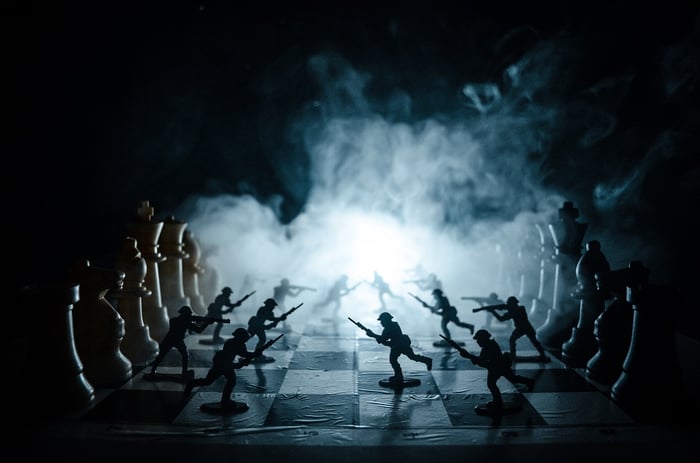 What WisdomTree has to offer

Though WisdomTree manages 578 different ETFs, the reality is that only a handful matter to its quarterly results. WisdomTree's top five funds by fee revenue -- the top 1% of all its funds -- generate nearly 37% of its recurring annualized management fees by my estimate.

If you expand the analysis to the top 10 ETFs under the company's umbrella, you'll find that these funds generate more than half (57%) of annual fees. The other 568 funds collectively generate the remaining 43% of management fees.

That WisdomTree's earnings power hinges on just a handful of funds is both a blessing and a curse. On one hand, large inflows into its highest-fee funds can move the needle in a material way, like when cash poured into its currency hedged ETFs throughout most of 2015. Back then, shares of WisdomTree reached an all-time high of $26.23 per share.

But, on the other hand, WisdomTree's fate will ultimately be determined by the success or failure of just a few funds, and it's my view that these funds are more likely to be losers than big winners.

Commodity funds are a commodity

Note that two of WisdomTree's most important ETFs are gold ETFs that trade in Europe, both of which carry annual expense ratios of roughly 0.40% per year. There's nothing proprietary about buying gold, storing it, and reselling it in pieces by creating an ETF. These funds can and will likely be knocked off by lower-priced competitors, just as they have been in the United States.

The fee wars in the United States have been extraordinary by almost any measure. Though SPDR Gold Trust holds on to its top spot in gold despite a 0.40% annual expense ratio, competitors have come racing to market with lower-priced ETFs to knock it off its throne. In a defensive move in 2018, SPDR launched SPDR Gold MiniShares Trust, complete with an annual expense ratio of 0.18%, undercutting its own market-leading gold ETF. State Street, the parent company of SPDR, was apparently so spooked by new lower-priced entrants that it decided to compete with itself. Few industries exhibit this kind of competition.

If you want to see the future for precious metals ETFs abroad, the U.S. serves as a good model. Already, SPDR Gold MiniShares Trust, which launched last June, has more than $600 million in assets under management, making it the fourth-largest gold ETF. It competes with ETFS Physical Swiss Gold Shares and GraniteShares Gold Trust, which have taken fee wars to a new level of petty by charging annual expense ratios of 0.17% and 0.1749%, respectively, in order to undercut SPDR's least expensive offering by a trivial difference of one basis point or less.

I suspect that SPDR has largely stamped out the competitive threats in gold ETFs with its smaller, lower-cost ETF, but that comes at a price. Retail investors are most likely to favor its less expensive fund with a lower per-share price, and thus every dollar on which it earns 0.18% is one less dollar on which it earns 0.40% per year in fees. WisdomTree's top gold fund may haul in annual fees of 0.40% of assets, but for how long?

Among WisdomTree's other moneymakers are currency-hedged ETFs that allow investors to buy Japanese or European stocks in such a way that hedges out currency fluctuations. These ETFs are popular because they offer a strategy that is difficult for investors to duplicate on their own. That said, duplicating these strategies is a cakewalk for large asset managers. iShares, the biggest ETF manager in the world, has similar funds priced to match WisdomTree's, and its funds are gaining traction with each passing month. 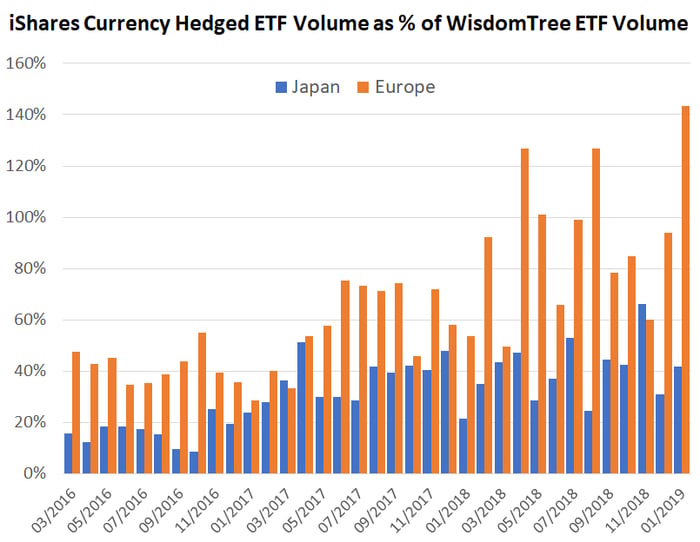 Inflows into these funds are cyclical, running hot and cold depending on investors' appetite for currency-hedged stock funds. I have little doubt that currency-hedged ETFs will catch on once again, but I do doubt that WisdomTree will capture share of inflows to the extent it did during the 2015 explosion in these funds' popularity.

The relative trading volume for an ETF is one of the best ways to determine which funds are likely to take in assets the next time these strategies run red-hot. And if you look at volume, it's quite clear that iShares is gaining ground, making it likely that it takes a larger share of assets the next time these funds catch on. Over the last three years, trading volume in iShares' ETFs has grown as a percentage of the trading volume in WisdomTree's ETFs. If you're an institutional investor that needs liquidity, volume alone may make the difference in choosing one ETF over another.

A race to zero

The fact is that ETF managers are engaging in a dangerous race to the bottom. Fee wars that were once waged only in the most plain-vanilla ETFs (funds that track well-known indexes like the S&P 500) are now emerging in niche commodity ETFs, emerging market funds, and even currency-hedged funds.

There isn't a strategy that's entirely immune from lower-cost competition. iShares could cripple WisdomTree's currency-hedge fund business if it were to compete on price, though it may not need to, simply because its funds are already stealing WisdomTree's thunder. Overseas, ETF managers are likely to compete on price to steal share from WisdomTree's highly profitable precious metals funds, if not today, then in the not-so-distant future. In a commodity business, large profit pools always attract competition.

WisdomTree may be on the auction block, but it isn't from a position of strength. By all appearances, WisdomTree is trying to sell out before it finds itself on the front lines of a raging fee war.