Please ensure Javascript is enabled for purposes of website accessibility
Log In Help Join The Motley Fool
Free Article Join Over 1 Million Premium Members And Get More In-Depth Stock Guidance and Research
By Brian Stoffel – Updated Apr 10, 2019 at 10:23AM

You'd think rich people are more conservative with so much money. But you'd be wrong.

The authoritative biography of Warren Buffett was aptly named: Snowball. When a snowball starts at the top of the mountain, it can easily fit in your hand. It takes lots of rolling time to double in size, as its lightness makes it hard to pick up more snow. But there is a tipping point, at which the snowball reaches a critical mass, and when combined with gravity, the object doubles, triples, and quadruples in size as it picks up momentum. The snowball becomes an entirely different animal, functioning by its own set of rules.

The exact same can be said for how some -- but certainly not all -- billionaires make their money work for them. The 1% of investors play by a very different set of rules than us Main Street folks trying to save for retirement. Once they have reached a point at which their financial future is secure, they can take far more -- not less -- calculated risk with their wealth. And this is a tactic us non-billionaires can learn some lessons from. 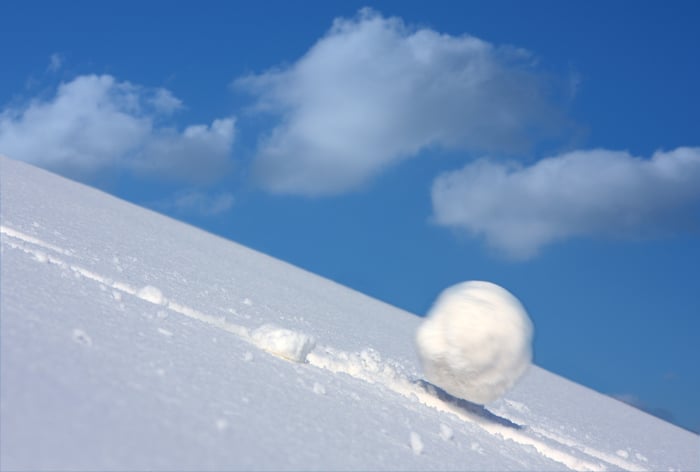 Let's investigate how the snowball of growth can be harnessed by any investor, from a billionaire to an investing newbie.

Let's say you know someone with $1 billion who generally spends $10 million per year on "normal" expenses. As such, if all she did was invest her money in inflation-protected bonds, she could go on with the same lifestyle for 100 years without ever having to worry about money.

Most billionaires, however, don't do this. Why? Every case is different, but the kernel of truth is this: We don't care about only economics. Economics professors would have us believe all of our financial decisions are based on cold, hard numbers, when in reality, our money choices are based on a mix of psychology, culture, relationships, fads, dopamine and cortisol running in our bloodstream, and economics, as The Motley Fool writer Morgan Housel has said.

Billionaires want to grow their money for a myriad of reasons including for their ego, for philanthropic reasons, to pass onto their heirs, to help the world move forward, or to make the Forbes list.

One trick rich investors often use is to take more calculated risk. Think about it: If our hypothetical billionaire put $400 million into bonds, she could safely live her lifestyle for another 40 years without having to worry and probably for the rest of her life.

That means she could take the other $600 million and do pretty much whatever she wanted with it. It's not crucial to her retirement. Why not focus on shoot-for-the-moon projects that might not only generate even more wealth but also help the world?

Many of today's most famous businesspeople have put their personal wealth behind moonshot projects:

And here's why these billionaires can do these things: Their downside is so protected that if any of their projects failed, they'd barely feel the effects. But if they catch lightning in a bottle with any of the projects, the results could be enormous and would drag the portfolio upwards.

Why is this so hard for most people to understand and practice? Because the psychological pain of failure can be too much for most to bear. Let's say our billionaire was one of the investors in Shark Tank. She invested in 20 different projects, and most ended up being failures. Here's what that might look like: 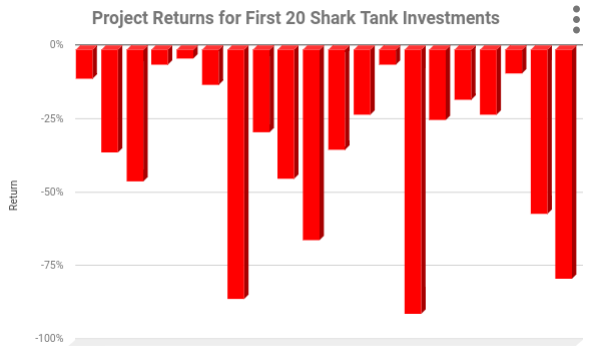 But then a 21st project comes along. It ends up being so successful that it can fund the next runaway success -- like investing in Chipotle 30 years ago. Here's what those returns look like now: 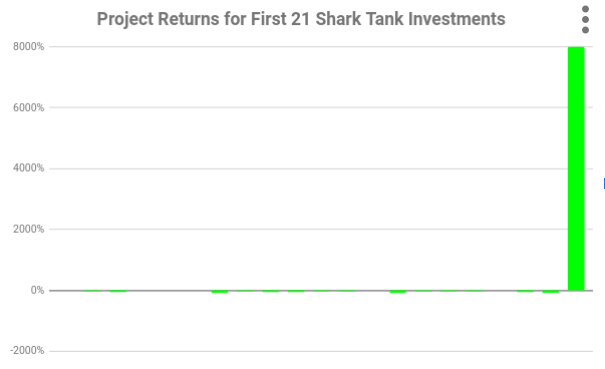 Those tiny green bars that you can barely see on the left side of the graph are those very same losses from the earlier chart, just dwarfed by the massive returns of this single last investment.

Of course, being a judge on Shark Tank or running a global company like Tesla, Alphabet, or Amazon is stressful and time-consuming, and not necessarily an easy gig to snag. But for billionaires who want an investment vehicle with the same kind of dynamic returns, venture capital (VC) might be the answer. VC firms provide financing to small startup companies early in their development that look poised to disrupt their respective industry.

Most start-ups fail to make it the whole way, but every now and again one will dramatically exceed expectations. Facebook is a great example. Accel Partners invested $12.7 million in 2005. That investment was worth about $9 billion when Facebook went public in 2012. Venture capitalists make their mint on these outsized paydays; it makes it worth it to accept the high risk of failure on the hundreds of other deals they do that don't work out.

You don't need VC to apply these principles

Here's the sobering fact about VC for us non-billionaires: Investing in VC firms is something only accredited, high-net-worth individuals (read: usually multimillionaires) have the ability to do. But that needn't get in your way. There are two very simple steps you can take to give yourself the same exposure to outsized returns as these billionaires.

First, protect your downside. I have long believed that the best way to do this is to discover what your own level of "enough" -- in terms of material goods -- is to be happy. Study after study has demonstrated that once our basic material needs are met, things like relationships, purpose and meaning, engagement, and freedom of time play a bigger role in our well-being.

Here's the hitch: If you spend less money, you'll be saving and investing more money -- meaning you'll achieve a measure of financial independence far sooner than you otherwise would. It will be far easier for you to set aside money to protect your downside -- say, investments in inflation-protected bonds -- that frees up the rest of your money for such VC-like investments.

But you don't need access to VC. The Motley Fool co-founder David Gardner has made a career of VC-style investments in public companies, developing six signs to look for if you're searching for "rule-breaking" companies to invest in.

Along the way, he's had his share of flops, but the winners have more than made up for it. David originally bought Amazon for a split-adjusted $3.19 per share. A simple $1,000 investment made then is worth more than a cool half million today.

But -- and this is the key -- you must be willing to hold stocks for the long run to realize gains like this. David surely could have sold a long time ago; the stock has lost more than half its value multiple times since he bought it.

That might be a tough psychological trick to pull off. But if you aren't a billionaire and you want to invest like one, it's a trick you must master. If you can, your money will be working for you -- without you having to lift a finger -- for decades to come.