There's a lot of love from Wall Street coming Shopify's (SHOP -1.30%) way after the fast-growing e-commerce platform provider delivered better-than-expected financial results on Tuesday. At least eight analysts boosted their price targets on the stock, including RBC Capital lifting its price goal to a Street-high $230.

Ross MacMillan at RBC Capital is upgrading Shopify from sector perform to outperform, arguing that 2019 will be a strong year for merchant growth given the platform's opportunity to expand internationally. He also feels that Shopify has enough wiggle room to improve the rates it commands on merchant transactions, making the forecasts set by Wall Street and Shopify itself prudent for the next few quarters. 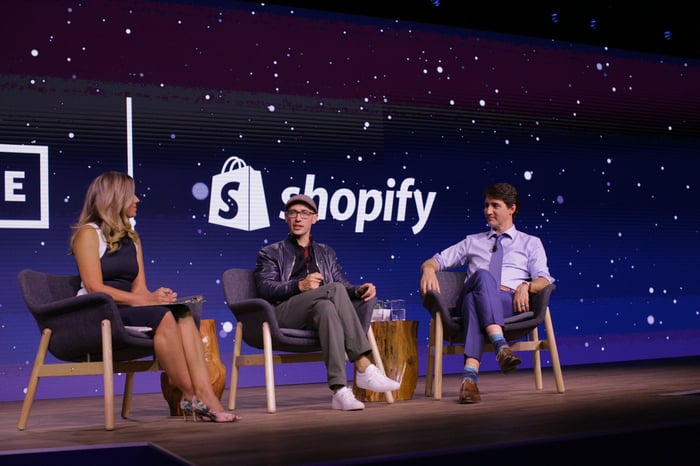 Investors initially bailed on Shopify after the company announced its fourth-quarter results on Tuesday morning. Shopify stock opened 5% lower, down by as much as 7% before shifting gears to close with a positive return for the day. The stock would hit its all-time high by Wednesday morning.

It was an odd knee-jerk reaction to a report that was a blowout in nearly every way. Revenue rose 54% to hit $343.9 million, well ahead of both the 47% that analysts were modeling and the 41% to 46% that Shopify was offering up as guidance three months ago. Trailing revenue now tops $1 billion for the first time.

Shopify is winning, largely because its merchants are winning. Gross merchandise volume soared 54% to hit a record $14 billion for the period. Shopify's subscription revenue rose at a slower 42% pace, but that only means that the subscription fees being paid by the average merchant are becoming a smaller part of their sales.

Don't cry for Shopify. Merchant solutions revenue has become the thickest slice of its top-line pie, and it soared 63% during the fourth quarter as Shopify's cut of the transactions and strong inroads into merchant financing, shipping, and other fulfillment offerings are paying off in a big way.

The news is just as kind on the bottom line. Shopify is still delivering red ink on a reported basis, but its adjusted profit of $0.26 a share for the quarter blew past the $0.15 a share it rang up a year earlier and the $0.20 a share that analysts were targeting. It's record profitability for Shopify and the fifth quarter in a row that is has landed at least 30% ahead of where Wall Street pros were perched.

Shopify's guidance calls for growth to slow, but that's not a shock or a deal breaker. Year-over-year revenue gains have decelerated for 12 consecutive quarters. Shopify is still growing fast. The opportunity is still massive. So many analysts wouldn't be scrambling to jack up their price targets if they thought Shopify was peaking this week. Shopify may not be cheap by most measuring sticks, but the market-thumping returns don't appear to be ending anytime soon.