The trendy cooler and beverage-holder company set high expectations for 2019.

Shares of YETI Holdings (YETI -2.41%) are up 14.8% at 12:50 p.m. EST on Feb. 14, following the company's fourth-quarter earnings release before market open. In short, investors are reacting positively to the company's strong growth, as well as to guidance for 2019 calling for continued double-digit sales growth and accelerated profits and cash flows.

With today's big surge, YETI investors are enjoying one heck of a ride. Since the start of 2019, shares are up an eye-popping 44%, and if we go back just a little further to the market bottom on Christmas Eve 2018, YETI's stock price is up almost 72%. That's one heck of a return for less than two months.

On one hand, there's not a lot in the company's top- and bottom-line results we didn't already know. YETI issued preliminary fourth quarter results back in mid-January, driving the stock up by near-double digits on that day. Here's a summary of the numbers. 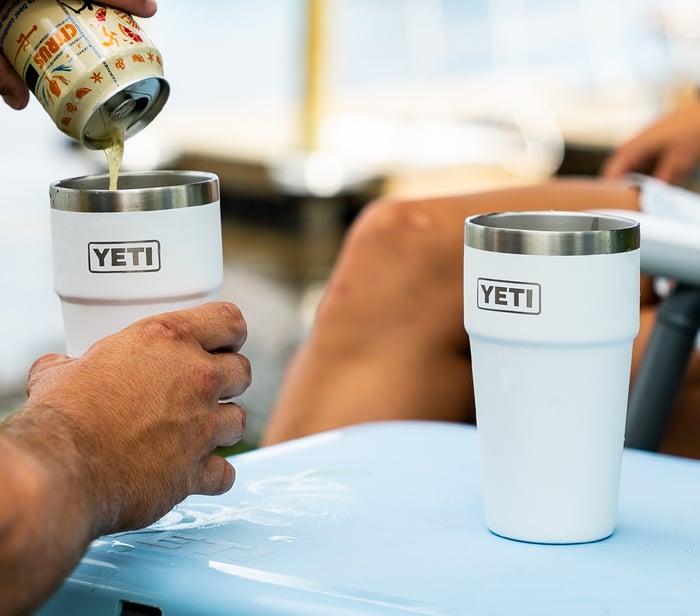 Net sales were up 19% to $241 million, with drinkware sales continuing to do the heavy lifting. That segment was up 24% to $143.5 million, while its coolers-and-equipment segment sales increased 10% to $91.2 million.

The company not only sold more products but also sold them at higher profits. Gross margin was 53%, up sharply from 46.1% year over year. The big surge was a product of several things, including cost improvements in its manufacturing, better inventory controls reducing inventory reserves taken versus last year, and the increase in direct-to-consumer (DTC) sales versus sales through retail partners.

YETI's solid results in the fourth quarter continued a strong trend during all of 2018, and management put those profits to work strengthening the company's balance sheet. At year-end, the company reported $471.7 million in total long-term debt, down $108.8 million from one year ago, while it also finished 2018 with $26 million more in cash (though that was offset by $30 million less in product inventory).

Management set relatively optimistic (and likely easily attainable) goals for 2019. The company expects full-year sales growth between 11.5% and 13% and expects operating income and gross margins to accelerate by double-digit rates over the course of the year as well. Much of this acceleration is likely due to YETI's steady increase in DTC sales, which are typically at higher profit margins versus sales through retail partners.

On the bottom line, the company is looking at GAAP -- generally accepted accounting principles -- net income growth between 22% and 29% as those increased margins turn more of each sale into profits. Furthermore, management pointed out that if last year's tax rate hadn't benefited from some nonrecurring items, earnings-per-share guidance would look more like 34% to 42% growth.

Based on that guidance, YETI shares trade for between 24 and 26 times forward earnings estimates. That's certainly not cheap, but if YETI can continue to deliver double-digit growth in sales and keep driving its margins higher, the price could look cheap in a few years. But with that said, there's also the very real risk that the company's high-end products will lose more and more sales to cheaper, "good-enough" knock-off products that limit its future growth.

As things stand today, it's too early to tell whether YETI's very real competitive advantages in terms of product quality and durability will matter to the mass market or if more and more cooler and beverage-container buyers will be satisfied with the YETI look and lesser performance from low-cost competition. Right now, it's too early to tell just how big YETI's true addressable market really is.