Stocks in just about every industry had a bad fourth quarter last year, pushing the S&P 500 down some 20% from its peak in early October to the bottom on Christmas Eve. While this big market sell-off was happening, crude oil prices also crashed, driving down many oil stocks even more than the market average.

Canadian integrated oil giant Suncor Energy (SU -2.79%) was one of the hardest-hit, with its stock price falling almost 35% over that period even as it continued to generate significant cash flows.

Guess what? Berkshire Hathaway (BRK.A -1.82%) (BRK.B -1.76%), led by investing legend Warren Buffett, who is assisted in his stock-picking endeavors by Todd Combs and Ted Weschler these days, took note. Suncor is now part of Berkshire's portfolio. 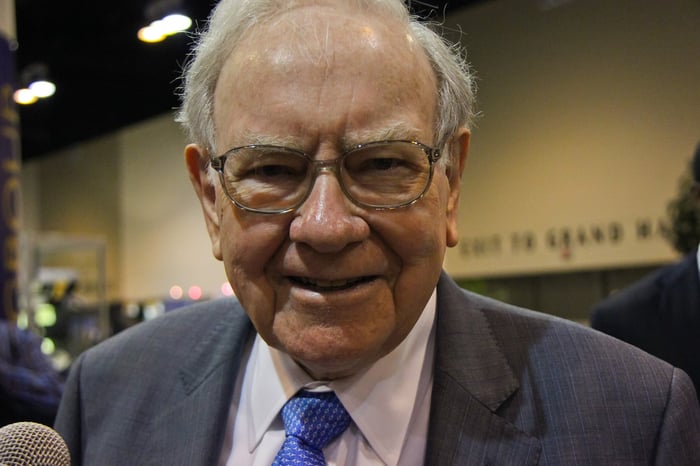 What makes Suncor an attractive investment

In what was a generally light buying quarter for Berkshire, the Suncor investment stood out because it represents only the second energy industry holding in the company's portfolio, along with longtime holding Phillips 66. The position in Phillips 66 also saw some action, but in the other direction: Berkshire sold some 3.5 million shares in the fourth quarter, continuing its recent history of selling shares of the refinery and midstream giant.

So, why the shift away from Phillips 66 and movement into Suncor? While I don't think it's a case of picking one over the other, there's a lot to like about Suncor. First, the company's integrated business in the Canadian tar sands has proven incredibly profitable. Last quarter, it generated well over CA$3 billion in operating cash flows even as Canadian crude prices plummeted, as shown in the chart below. 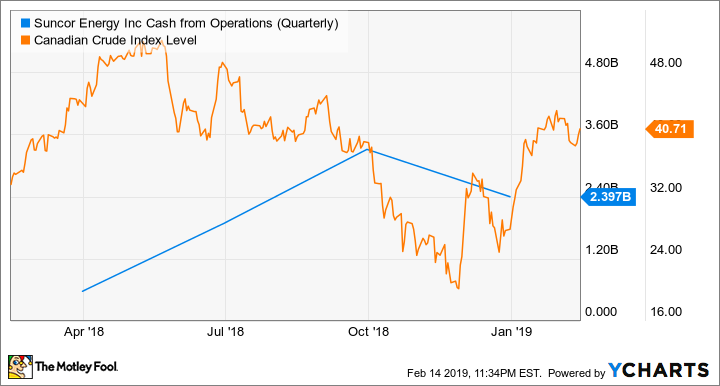 Although Canadian crude prices fell as low as $10 per barrel, Suncor managed to generate a substantial amount of cash thanks to its highly integrated business. Suncor is able to refine the heavy crude it produces from Canadian Tar Sands, giving it the ability to generate very strong margins on the refined products it produces.

Furthermore, Canada's west coast ports give Suncor access to strong demand markets in Asia, meaning it has great optionality to sell its products to end markets with the highest demand to get the best returns.

When it comes to durable advantages like these, Buffett isn't one to miss out -- especially when considering that Suncor was a bargain last quarter, with its shares trading for some of the cheapest multiples to its cash flows we have seen in the past several years. 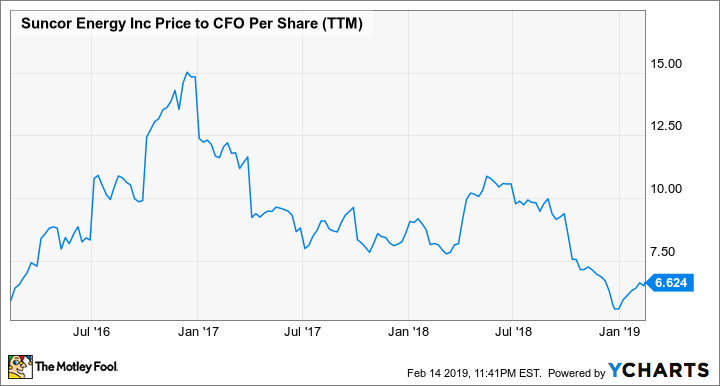 SU Price to CFO Per Share (TTM) data by YCharts

Is Suncor worth buying?

The chart above shows that, at least based on the company's cash flows, Suncor is absolutely worth considering for a portfolio. Oil prices have rebounded, meaning gasoline, diesel, jet fuel, and other refined products are now selling for more than Suncor likely realized in the fourth quarter, while its Tar Sands oil feedstock remains cheap to produce and source. In other words, Suncor's cash flows are likely to be even higher now than they were last quarter.

Suncor is also an excellent dividend stock, with a 3.3% yield at recent prices and foreign exchange rates (it pays the dividend in Canadian dollars), and there's a good chance the payout will go up along with cash flows. Whether it remains a part or becomes a bigger component of the Berkshire portfolio remains to be seen. But for investors looking for a dependable investment in the energy industry, you could do far worse than Suncor, particularly at what remains a very cheap price for a high-quality company.