Revenue plunged by 24% in the fourth quarter for graphics chip developer NVIDIA (NASDAQ:NVDA), the result of a series of problems that hit the company all at once. An oversupply of graphics cards created by the cryptocurrency crash knocked down gaming sales, as did weak demand from China and sluggish uptake for the company's latest RTX 20 series cards. Data center growth also slowed way down as customers grew more cautious.

The first quarter of fiscal 2020 won't be any better. NVIDIA expects to generate revenue of $2.2 billion, down a whopping 31% year over year and flat from the fourth quarter. The good news: NVIDIA expects its full-year revenue to be flat to slightly down, a better-than-feared outlook. The bad news: That full-year guidance doesn't make much sense. 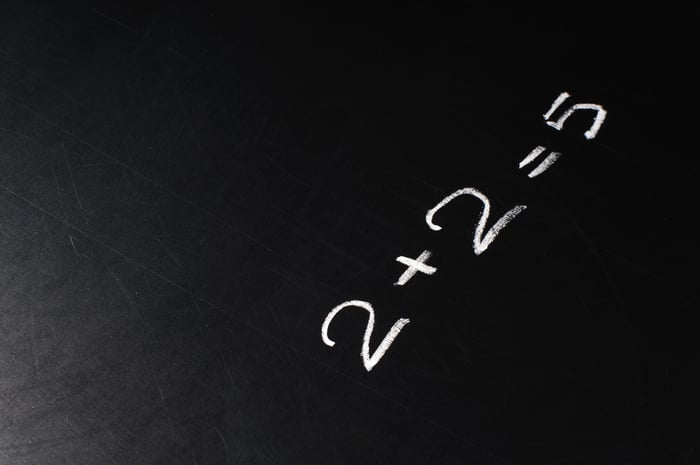 A difficult path to flat revenue

In order to produce close to the same amount of revenue in fiscal 2020 as it did in fiscal 2019, NVIDIA needs to make up for the giant shortfall expected in the first quarter. The comparisons will be tough until the fourth quarter, when NVIDIA will lap that 24% decline.

Gaming is NVIDIA's biggest segment. Here's what the revenue picture looks like: 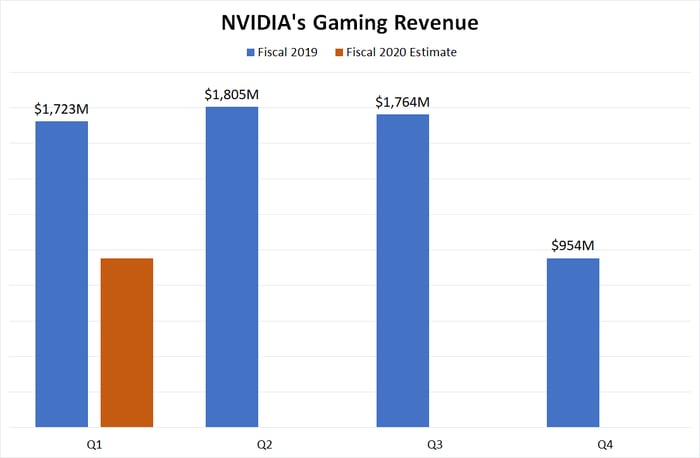 NVIDIA will need to make up just about $800 million of gaming revenue in the final three quarters of 2020, assuming first-quarter gaming revenue is roughly flat sequentially. It's not clear how that's even possible.

NVIDIA CFO Colette Kress explained during the earnings call that once the cryptocurrency-related inventory overhang is over, normalized gaming revenue is expected to be approximately $1.4 billion, with $900 million from desktop gaming and the rest from notebook gaming and gaming consoles. Kress arrived at that number by averaging NVIDIA's gaming revenue, or expected gaming revenue, from the second quarter of 2019 through the first quarter of 2020.

Let's take that number at face value. If NVIDIA generates $1.4 billion in gaming revenue in each of the final three quarters of fiscal 2020, its total gaming revenue this year will be about $5.1 billion. That's down more than 17% from fiscal 2019.

NVIDIA's other segments can pick up some of the slack, although that's no guarantee. In data center, NVIDIA saw hyperscale and cloud purchases decline on a year-over-year basis in the fourth quarter. The company expects this slowdown to be temporary, but Kress said that "our visibility remains low in the current cautious spending environment, and we don't forecast a meaningful recovery in the data center segment until later in the year."

The data center segment may not produce any growth at all in fiscal 2020, and it could even decline if the slowdown persists throughout most of the year. NVIDIA's other segments, which include professional visualization, auto, and OEM and IP, are too small to have much of an impact.

NVIDIA is banking on a strong gaming recovery in the second half, to well above its "normalized" level, in order to hit its guidance. That seems unlikely. NVIDIA's RTX 20 series graphics cards are selling poorly because the company pushed prices up too high and provided too little value to consumers. Advanced Micro Devices is expected to launch new graphics cards sometime this year, throwing another wrench into NVIDIA's plans. And there's no telling when demand in China will recover.

For NVIDIA to hit its full-year guidance, pretty much everything must go right for the company. The gaming business needs to not only normalize at the level the company expects, but it must grow well beyond that in the second half. NVIDIA's management was unable to see any of its current problems coming from very far away. Given that track record and some basic arithmetic, its full-year guidance should be taken with a grain of salt.