Please ensure Javascript is enabled for purposes of website accessibility
Log In Help Join The Motley Fool
Free Article Join Over 1 Million Premium Members And Get More In-Depth Stock Guidance and Research
By Brian Stoffel – Updated Apr 15, 2019 at 10:25AM

The second is -- by my estimation -- the most important.

Two weeks ago, I added a sizable portion of Atlassian (TEAM) stock to my family's portfolio. It makes tools that allow employees at companies -- particularly software and IT companies -- work on projects and communicate with one another. And it benefits from the powerful software-as-a-service (SaaS) business model.

As anyone who has used any of Atlassian's tools has already learned, these solutions become invaluable -- an everyday part of life. That kind of ubiquity is what led me to the company. It has also helped investors reap huge rewards over the past three years: The stock is up 420%. 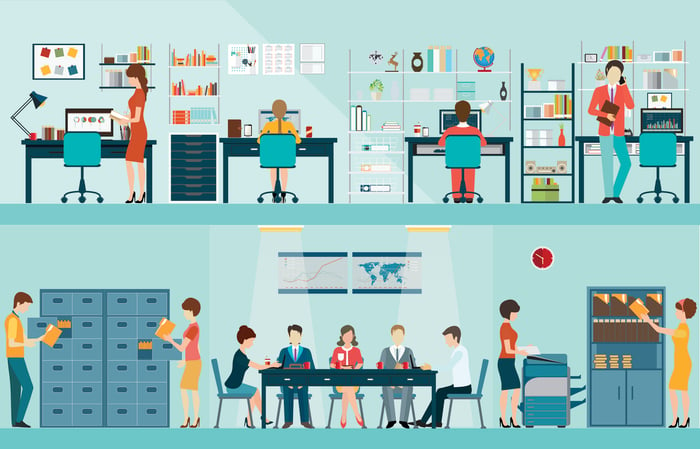 If you're new to the company, here are 10 reasons I think you should consider adding shares yourself -- with the intention to never sell them.

Perhaps more than most finance writers, I spend a great deal of time studying the mission statements of the companies I invest in. Some argue the statement is a pithy sentence produced out of tradition rather than practicality.

Atlassian's mission statement is: "to unleash the potential of every team." That is an exceedingly simple mission. It is also -- depending on your perspective -- inspirational. And perhaps most importantly (we'll investigate this below), it is very optionable. There are tons of ways this mission can be accomplished.

2. An obvious moat widening around the business

Atlassian makes a number of tools that companies quickly come to rely on. The most recent annual report identifies five core services:

The important thing to know about these tools is this: They become pillars of how employees at technology companies communicate. Once employees at these companies get comfortable on these platforms, the switching costs become sky high.

Why is that? Think about it: Would you want to retrain your entire workforce on a new platform? What about the costs associated with migrating all that data to another provider? And what would happen if any mission-critical data was lost in that process?

Unfortunately, Atlassian doesn't publish metrics -- like dollar-based net expansion -- that tell us how good the company is at keeping its customers on board. But as we'll see below, the growth the company is demonstrating leads me to believe it isn't having a problem here.

3. Growth demonstrating the power of the moat...and popularity of the products

In the intervening two and a half years, those numbers have exploded. Customers have more than doubled to more than 138,000. Here's what's happened to revenue and free cash flow: 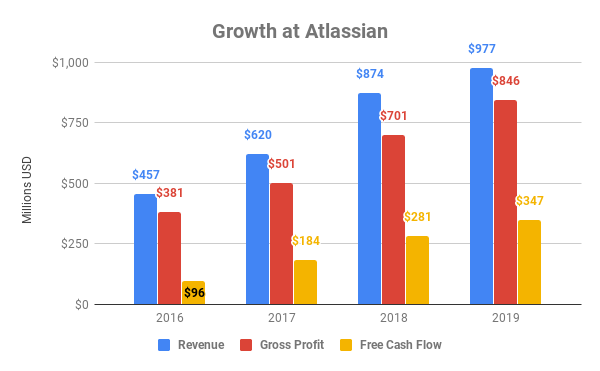 Most companies would kill for a chart like that. Revenue is growing at a compounded rate of 36% per year; gross profit (38% per year) and free cash flow (67% per year) fare even better! And let's not forget that those 2019 figures only include the additional six months through the company's fiscal 2019 so far. By mid-2019, the figures will be even more impressive.

What does this all mean? Atlassian is not only gaining customers, but it is doing so profitably -- at least on a free-cash-flow basis.

But Atlassian isn't limited to the five products above. There are infinite ways to help unleash the potential of every team. There are a number of up-and-coming services that could one day contribute as much to Atlassian's top-line growth as the heavy hitters. These include:

Here's the important takeaway for investors. Because of the success of Atlassian's five core products, it can afford to keep testing new products and can survive if many of them fail. That's powerful, because it takes a lot of trial and error to land on a product that can become a hit.

The above represent six such trials underway, but long-term investors can count on many more in the years to come. If only 10% become big hits, it would be a major win for Atlassian, its customers, and its investors.

There is another service I left out of the above description: Atlassian Marketplace. That's because I wanted it to get its own bullet point. This represents a place for third-party app developers to make tools on Atlassian's platform that only Atlassian customers can buy.

Atlassian doesn't have to fork over much cash for these tools to be developed, and they will probably never become a major source of revenue for the company.

Evidence points toward the Marketplace picking up steam. It started in 2012 and crossed $250 million in annual sales in early 2017. Six quarters later, it crossed $500 million cumulative. And through the company's first six months of fiscal 2019, Atlassian Marketplace has recorded more than $200 million in sales.

6. The anti-ego: Ability to swallow sunk costs when it's necessary

Remember how I said the company has five core products? Well, it actually used to be six. HipChat was a product that allowed companies to communicate with each other in real time. As time went on, it became increasingly clear that Slack -- a competing product -- was winning over much more of the market.

Some management teams would have doubled down and tried to beat Slack. They would have let their egos do the talking and been unable to see that such a fight would do more harm than good. But Atlassian's team didn't let sunk costs get in the way.

In July 2018, Atlassian's leadership announced a partnership with Slack and an eventual closing of HipChat -- a move that will likely benefit both companies in the long run.

7. Founders and skin in the game

Speaking of that leadership team, they are part of the reason I believe in the company. Michael Cannon-Brookes and Scott Farquhar founded Atlassian in Australia more than 10 years ago. The two are still at the helm as co-CEOs. They also both have lots of skin in the game, owning more than 130 million Class B shares between the two and controlling over 91% of voting rights.

This is an arrangement I'm very fond of. Founders -- more than CEOs who are appointed years later -- often view their companies as an existential part of who they are. They want to know that what they build will be around for decades after they're gone. And lest that not be motivation enough, they will only win -- financially -- when we win thanks to their ownership stake in the company.

While those at the helm are undeniably important, so too are those that carry out the company's mission: its everyday employees. Based on reviews on Glassdoor.com by anonymous employees, Atlassian is a great place to work:

When employees are happy, it means three things for investors. First, it means they're likely in it for the long haul -- which is important to building institutional knowledge that can lead to decades-long out-performance. Conversely, it also means Atlassian won't spend a fortune retraining employees due to churn. And finally, it means that when Atlassian's customers are interacting with the company, they're probably having a positive experience.

Over the last three years, no customer has constituted more than 10% of the company's revenue. That means if a customer leaves, it's not the end of the world. In fact, if Atlassian can learn more about why the customer left, it can actually make Atlassian stronger in the long run.

Finally, Atlassian has the financial fortitude that should help investors sleep well at night. In addition to free cash flows of $347 million over the past 12 months -- much of it coming from reliable, recurring revenue -- Atlassian also sports a net cash position (including investments) of more than $800 million.

Not only does that mean Atlassian can easily meet its debt obligations, but it also has wiggle room to make strategic acquisitions.

Put all of this together and you can see why I'm excited about Atlassian. I've started with a position that takes up 2% of my real-life portfolio. But if the company continues to perform as well as it has, I have no doubt I'll be adding to it over time. I think you should consider doing the same.