It was a good week for stocks. Shares ended the week up 2.5% as corporate earnings continued and as President Trump signed a spending package to avoid another government shutdown. Beyond these headlines, some interesting stories in tech stood out: 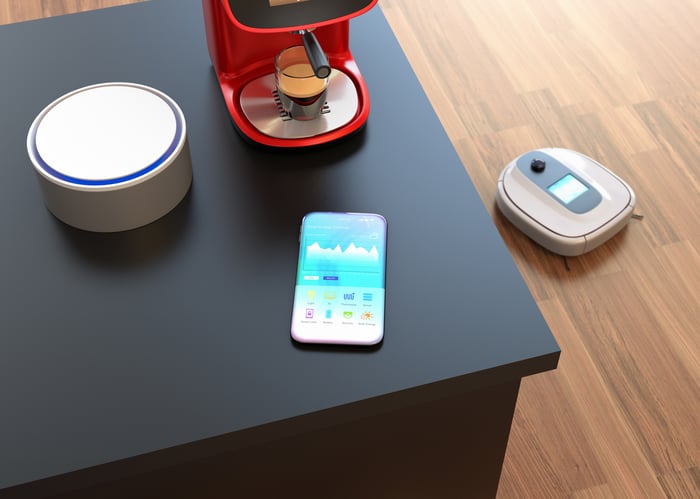 E-commerce and cloud-computing giant Amazon announced on Monday evening that it was acquiring mesh-networking Wi-Fi company Eero for an undisclosed sum.

"We are incredibly impressed with the Eero team and how quickly they invented a Wi-Fi solution that makes connected devices just work," said Dave Limp, senior vice president of Amazon devices and services, in a press release about the deal. "We have a shared vision that the smart home experience can get even easier, and we're committed to continue innovating on behalf of customers."

Amazon has a fast-growing portfolio of smart home devices that began with its first Echo smart speaker, which was introduced in 2014. Today, Amazon's smart devices include a wide range of smart speakers, as well as smart locks, cameras, doorbells, receptacles, and more. With Eero's mesh-networking devices, Amazon can fortify its lead in the smart-home market.

Shares of semiconductor company NVIDIA jumped about 8% on Thursday, when the company reported its fiscal fourth-quarter results.

The quarterly update followed NVIDIA's downward revision to its guidance for its fiscal fourth quarter in January. The company said it expected $2.2 billion in fiscal fourth-quarter revenue, down from a previous estimate for $2.7 billion.

But now that NVIDIA has had time to tally up its actual results for the period, revenue was $2.21 billion, slightly ahead of its revised guidance for $2.2 billion. In addition, adjusted earnings per share of $0.80 came in slightly ahead of analysts' consensus forecast for $0.75.

Workday stock gets an outperform rating

Enterprise cloud applications company Workday made headlines on Friday, when, according to Barron's, Cowen analyst Derrick Wood increased his rating for the stock from "market perform" to "outperform." Noting that the firm's "checks" point to "a strong uptick in pipeline of new blue chip Cloud [financial] customers," Wood predicts a robust product cycle for the company. "We see several new product cycle growth catalysts emerging, leading to greater upside and a more bullish narrative," Wood added.

Notably, management did say during the company's third-quarter update that its financial management suite of applications was seeing "accelerated adoption" by customers.