These drugmakers' profit margins are sky-high. But does that necessarily mean they're great stocks to buy?

Big drug companies make big profits. But which are the most profitable of all?

There are 21 drug stocks in the S&P 500 index, representing the biggest drugmakers in the U.S. The three most profitable companies in this group based on profit margin are Vertex Pharmaceuticals (VRTX -1.54%), Nektar Therapeutics (NKTR -2.77%), and Regeneron Pharmaceuticals (REGN -1.73%). But are these highly profitable drug stocks good picks for investors to buy now? 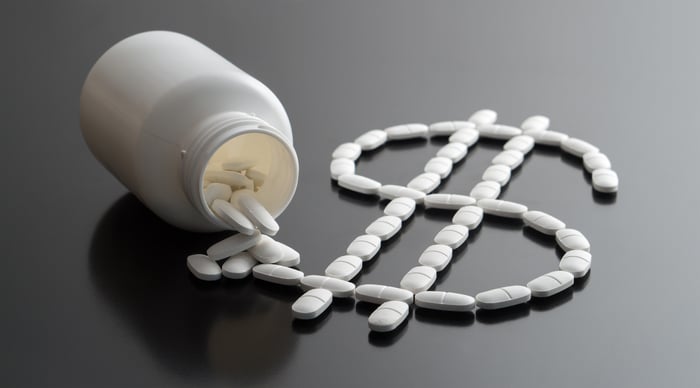 Vertex Pharmaceuticals claims a sky-high profit margin of 69%. It's important to note, though, that Vertex only became consistently profitable in 2017. The company lost more than $1.8 billion over the previous five years.

Nektar Therapeutics isn't too far behind Vertex, with the biotech's profit margin currently at just under 60%. But there's a major asterisk with the company's profits. Although Nektar ranks as one of the most profitable drugmakers, the company isn't consistently profitable yet.

Nektar's high profit margin is due to a big licensing deal with Bristol-Myers Squibb for immuno-oncology candidate NKTR-214. This deal, which was announced in February 2018, led to Nektar recording an additional $1.06 billion in revenue in the second quarter last year. And that gave the biotech a profit so high that it more than offset losses in the other quarters over the last year.

It might not be too long before Nektar generates nice profits without the help from a big licensing deal. The biotech currently awaits FDA approval for pain drug NKTR-181. Nektar also has four drugs in late-stage clinical studies, including NKTR-214.

Regeneron Pharmaceuticals' profit margin tops 36%. Unlike Vertex and Nektar, there aren't any gotchas with Regeneron's tremendous profits. The big biotech really is as profitable as it seems.

One drug is primarily responsible for Regeneron's financial success: Eylea. The company made over $4 billion in sales from the eye-disease drug in the U.S. last year. Its collaboration with Bayer brought in another $1 billion or so for Regeneron in sales outside of the U.S.

However, Regeneron also has several other approved products that could bolster its profits more in the future. Cholesterol drug Praluent hasn't yet delivered on its potential but could pick up momentum with regulatory approval for the drug in reducing cardiovascular risk. Regeneron and partner Sanofi also market asthma and eczema drug Dupixent and cancer drug Libtayo.

Regeneron continues to make money hand over fist. However, I'm concerned about the company's reliance on Eylea and the ability for its other products and pipeline candidates to make up for any potential future sales declines for its flagship drug.

Nektar is one of the more promising biotechs on the market. I'm tempted to call the stock as one to buy, but I'd prefer to hold off to see how some of the company's top pipeline candidates fare in late-stage testing.

That leaves Vertex. The company has a strong CF franchise with triple-drug combos likely on the way that could expand its market significantly. Vertex is also hoping to move into other indications outside of CF. I think that Vertex is the best biotech stock on the market and a great pick for investors to buy right now.

3 Growth Stocks That Are Crushing It This Year