Please ensure Javascript is enabled for purposes of website accessibility
Log In Help Join The Motley Fool
Free Article Join Over 1 Million Premium Members And Get More In-Depth Stock Guidance and Research
By Jeremy Bowman – Updated Apr 10, 2019 at 10:43AM

FedEx and UPS, are you listening?

For years, rumors have been building of Amazon.com's (AMZN 1.90%) intentions in logistics and delivery. The company has added fulfillment and logistics services to the list of competitors in its 10-K report, and has unveiled a program called Amazon Shipping, whereby the company picks up and delivers other shippers' packages. In recent earnings calls, CFO Brian Olsavsky has also begun talking more about the company's ambitions in logistics.

However, the clearest sign yet of Amazon's potential impact in the industry came from the recent earnings report from XPO Logistics (XPO -0.68%), one of the biggest global providers of freight and logistics services and the leader in last-mile delivery of heavy goods like furniture and appliances. In its fourth-quarter report, XPO slashed its 2019 guidance significantly, and its shares fell by double digits on the report. The culprit was "the impact of our largest customer substantially downsizing its business portfolio," according to CEO Brad Jacobs. Jacobs went on to explain on the earnings call that XPO would lose $600 million in annual business from this customer, who was reducing business by two-thirds.

Though Jacobs did not name the customer, it was widely assumed to be Amazon. Jacobs explained that the business his company lost was postal injection, or bringing truckloads of packages in high volume to the post office. He also explained that postal injection has low barriers to entry and is therefore not as protected as the company's business doing last-mile delivery of heavy goods.

The news also weighed on FedEx (FDX -4.12%) and UPS (UPS -1.51%), which were down 2.9% and 1.3%, respectively. Both FedEx and UPS have sought to downplay the threat from Amazon, saying that it would take billions of dollars in investments for Amazon to begin to compete with them. However, as XPO's slide shows, it doesn't take much to torpedo a stock price. 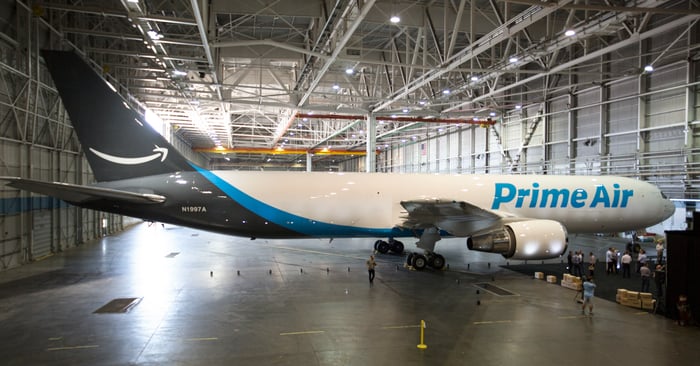 According to Transparency Market Research, the global logistics market is expected to reach $15.5 trillion by 2023. While Amazon clearly isn't targeting all of that market, it's not surprising that the company is homing in on an industry that is both huge and directly connected to its e-commerce business, as extending into shipping would essentially represent a vertical integration.

A recent article in The Wall Street Journal (subscription required) details how Amazon is attempting to undercut FedEx and UPS by avoiding pesky fuel surcharges and other such fees. The e-commerce giant is also now using its own logistics service to deliver about 26% of its own orders, according to Wolfe Research, showing that it's already built a significant logistics business, as the company controls about half of e-commerce sales in the U.S., both through its own retail operation and its third-party marketplace. Amazon is the U.S. Postal Service's biggest customer, and is one of the biggest for FedEx and UPS, so its initiatives threaten not only to take away a valuable customer from the shipping giants but also to put pressure on prices in the industry as Amazon has made a habit of in other sectors. To deflect concerns about Amazon, FedEx recently released a statement saying the e-commerce giant made up just 1.3% of its business.

What we like about our ability to participate in transportation is that a lot of times we can do it at the same costs or better and we like the cost profile of it, too. We can also invest selectively because we have more perfect information. We know where our demand is, we know where we're moving things between warehouses and sort centers. And by not involving third parties all the time, we found that we can extend our order cutoffs and we've done that over the last few years.

Olsavsky touches on the enormous amounts of data Amazon uses to inform its own delivery service and tailor it to its own needs.

In many ways, the burgeoning Amazon Shipping business seems to resemble Amazon Web Services (AWS), the company's cloud-computing juggernaut, which it originally developed as an in-house project to serve its own e-commerce needs but is now the biggest enterprise cloud business in the U.S. by adoption. AWS posted an operating profit of $7.3 billion in 2018.

While Amazon is facing entrenched competition in logistics, it could very much follow the same path it did with AWS, as the company can take the lessons and data from providing logistics and delivery services for itself and apply that knowledge to serving its customers. Amazon has shown myriad times before that it's unafraid to challenge industry leaders even in areas where it has no previous experience.

XPO shares finished Friday down 12.6%. This likely won't be the last time a logistics provider blames its woes on Amazon.