Coca-Cola (NYSE:KO) reported strong fourth-quarter numbers, but its stock has been dragged down by its cautious guidance for 2019. Most notably, the company delivered Q4 earnings per share (EPS) of $0.18 versus a loss of $0.66 per share in the year-ago period.

The solid quarter, however, was greatly overshadowed by the fact that the company expects full-year organic revenue growth to slow to 4%, down from 5% in 2018. In addition, Coca-Cola expects its full-year EPS to be flat, coming in at the same $2.08 delivered in the past year.

The somewhat weak outlook does not mean the company will falter in the long term. CEO James Quincey was upbeat during the Q4 earnings call as he laid out some of the changes the company has made that will help it going forward. 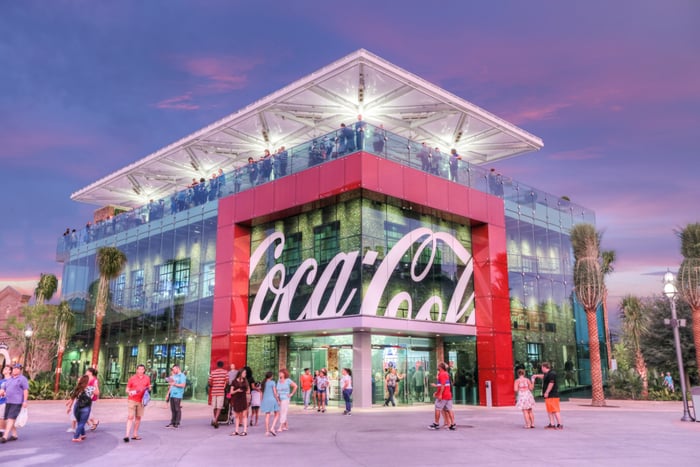 Coca-Cola has been adding nonsoda brands to its portfolio. Image source: Coca-Cola.

Consumers have been drinking less soda. That's not great news for a company named after a soda, but Coca-Cola has been working to diversify its portfolio.

"We strengthened our sparkling soft drink portfolio, leveraging brand edge and innovation to build consumption rituals by offering people what they want, when and where they want it," Quincey explained.

Moving more heavily into sparkling water drinks does not mean the company has ignored its core brands. Instead, the chain has offered new varieties of its signature drink designed to capitalize on current trends.

"Trademark Coke grew volume 2%, driven by solid performance in brand Coke and supported by innovation such as Coca-Cola Plus Coffee and Coke Origins as well as strong growth in our no-sugar variants," the CEO said. "Coca-Cola Zero Sugar delivered yet another year of double-digit volume growth globally. And in North America, we reinvigorated Diet Coke with the brand growing retail value 3% after multiple years of declines."

In 2018, Coke got rid of what Quincey said were more than 700 "zombie SKUs," i.e., products that were still in the system but were not selling. That was done to simplify the supply chain and properly allocate resources. Doing that allowed the company to focus on acquisitions and using its muscle to push high-volume products.

"We expanded our portfolio through M&A and strategic investments," Quincey said. "This included smaller investments like BODYARMOR, one of the fastest-growing beverage trademarks in the U.S. Of course, our biggest announcement was the acquisition of Costa, which we closed on Jan. 3 this year. Costa platform will give us the ability to scale within the $500 billion global hot beverage category and create a world-class global coffee business."

Sometimes investors don't notice some of the behind-the-scenes moves a company makes that set it up for longer-term success. Quincey highlighted some of those toward the end of his remarks.

"We added two new group presidents with considerable experience. And we created a new group, Global Ventures, to ensure we connect and globally scale key acquisitions, investments, and partnerships like Costa Coffee, Innocent, and Monster," he said. "The changes we've made are significant, and they help set us up for more success in the years to come across our geographies. Looking around the world."

Coke may have offered up a disappointing 2019 forecast, but Quincey isn't building the company for a single year. He's revamping its portfolio, marketing, and distribution for a much longer time frame. The Costa deal alone should allow the company to leverage its distribution to a strong place in a category where it has previously not been a player, and the company has been judiciously remaking its product lineup to better serve an ever-evolving customer.