Great dividends from energy to entertainment.

Owning dividend stocks can be a great way to not only grow your portfolio but also get a tax-effective cash return on your investment. Whether you're in retirement and looking for cash flow or early in your investment journey, dividends stocks are a great choice.

We asked three of our Foolish contributors for their top dividends today, and Phillips 66 Partners (PSXP), Las Vegas Sands (LVS 8.81%), and Hess Midstream Partners (HESM) were at the top of the list. And these are very different dividends indeed. 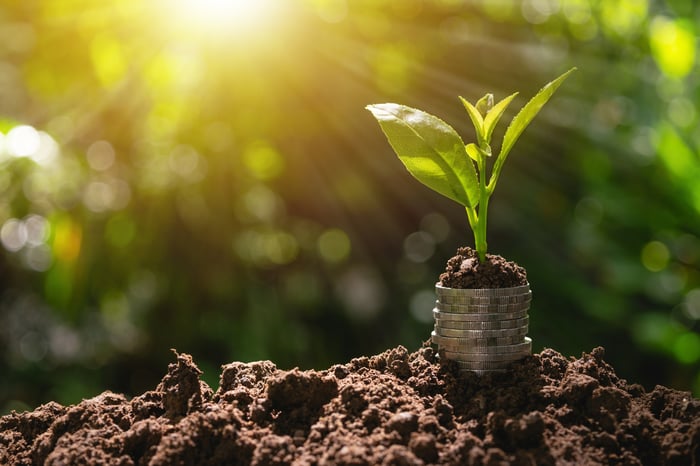 21 straight quarters with plenty of fuel to continue growing

Matt DiLallo (Phillips 66 Partners): Master limited partnership Phillips 66 Partners has been a phenomenal dividend stock over its nearly five-year history. Not only has it given investors a raise in all 21 quarters that it has been a public company but the MLP has increased its payout at an impressive 30% compound annual growth rate over that time frame, achieving the stated goal at its formation to expand its payout by that rate through the end of 2018.

While Phillips 66 Partners likely won't continue growing its payout at such a fast pace, it does have plenty of fuel to keep increasing it each quarter for at least the next few years. Driving that view is that the MLP has a large backlog of expansion projects underway and more in development. The company currently expects to invest more than $500 million on expansion projects in 2019, which include a large-scale oil pipeline, a marine export terminal, and a unit to produce higher-octane gasoline blend components that should all start up later this year while a natural gas liquids storage cavern should be in service by late 2020. In addition to those projects currently under construction, several more in development include a proposed oil pipeline joint venture with another MLP that could start up in the second half of 2020. As these and other projects enter service, they'll provide Phillips 66 Partners with more cash flow so that it can continue increasing its distribution to investors.

Phillips 66 Partners has quietly grown its dividend up to an attractive 6.6% by steadily expanding its portfolio of cash-flowing energy infrastructure assets. With more projects in progress, that payout should continue growing over the next few years, which is why income-seeking investors will want to take a closer look at this amazing dividend stock.

Travis Hoium (Las Vegas Sands): Las Vegas may not be the first place you look to find dividend stocks, but maybe it should be. Massive casinos are extremely expensive to build, but once they are, they crank out cash from hotel rooms, restaurants, bars, and, of course, the casino itself. Now that construction in Las Vegas, Macau, and Singapore has ground to a halt, casino operators like Las Vegas Sands have more cash than they can reinvest back in the business or pay out to investors as a dividend.

The chart below shows EBITDA, a proxy for cash flow from casinos, hovering between $4 billion and $5 billion annually over the last five years, a range that's likely to grow slightly over time as Las Vegas, Macau, and Singapore gaming grows. The dividend has also increased to $3 per share with a plan to increase to $3.08 per share in 2019. 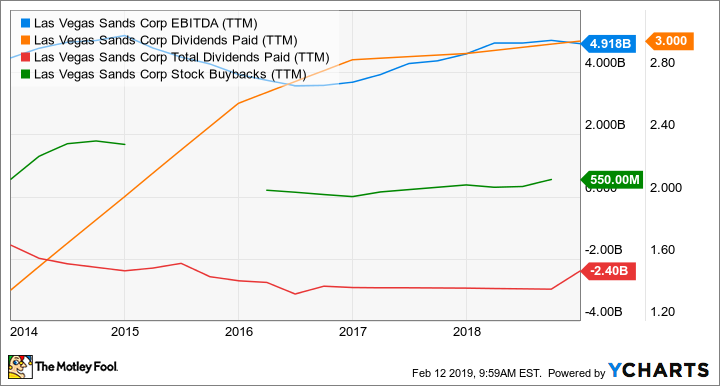 On top of dividends, Las Vegas Sands has bought back $3.7 billion of stock over the past six years as another way to return cash to shareholders. There aren't any major capital investments on the horizon to build new casinos, so Las Vegas Sands' cash machine will keep churning out money that will be returned to shareholders. Visitors to the Las Vegas Strip might not realize it, but the profits from the city's casinos are now being put toward strong dividends like the 5.1% yield Las Vegas Sands' stock currently has.

Banking on the Bakken

Todd Campbell (Hess Midstream Partners): There are few places as desirable to drill for oil and gas as North Dakota's Bakken shale. New technology that's allowing oil companies to extract increasingly more oil and gas from the ground has resulted in a quadrupling of North Dakota's production from the 1980s.

Hess Midstream Partners could be a great way to profit from expected, ongoing production growth in the formation. Spun from Hess Corp. (HES 6.24%) in 2017, Hess Midstream owns gathering, processing and storage, and terminaling infrastructure in the play. It still generates most of its business from Hess, but that's not a bad thing.

Hess Corp. has six rigs operating on its 550,000 net acres in the Bakken now, up from four rigs one year ago, and that's helping boost Hess Midstream's results. Last quarter, Hess Midstream's year-over-year throughput volume for crude oil gathering jumped 54% and crude oil terminaling grew 42%. Its gas gathering and processing also posted growth of 10% and 9%, respectively, and as a result, Hess Midstream revenue increased 14% year over year to $171 million in Q4.

The increased activity resulted in net income improving to $92 million from $77 million last year and when all was said and done, Hess Midstream's fourth-quarter dividend increased 15% year over year to $0.3701 per unit. Hess Midstream's dividend yield is currently a healthy 7.05%.

There's reason to think more dividend increases could be coming, too. Hess Corp. expects its Bakken production to climb to 200,000 barrels of oil equivalent per day in 2021, up from an expected 145,000 BOE/D this year and 117,000 BOE/D in 2018. Also, Hess Midstream has projects underway that could help it land more business from third parties in the future, boosting results while also diversifying its customer base.

Overall, the Bakken appears poised for at least a few more years of rapid production growth, and that makes Hess Midstream one of the most intriguing high-yield dividend stocks out there.

Check out the latest earnings call transcript for Hess Midstream.

Whether it's energy or entertainment, there's a lot to like about these three dividends. And MLPs go the extra mile by being a tax-effective way for companies to save on corporate taxes by returning funds to shareholders. If you're looking to grow your cash flow generation each year, these are three great stocks to start with.