For all the talk of big media companies like Disney (DIS -0.15%) planning to enter the direct-to-consumer streaming video market, CBS (PARA 2.94%) has been doing it for four years. The company launched CBS All Access at the end of 2014, and the streaming service, combined with Showtime, now has 8 million subscribers. That's up from 5 million combined subscribers at the end of 2017.

Management is now projecting the two streaming services will combine to attract 25 million subscribers by 2022. CBS has managed to grow its subscriber count through investments in programming, and the rich data it gets from direct-to-consumer subscribers is enabling it to provide advertisers and creators with better information about what its audience wants. CBS plans to leverage those data to accelerate results for its streaming services going forward. 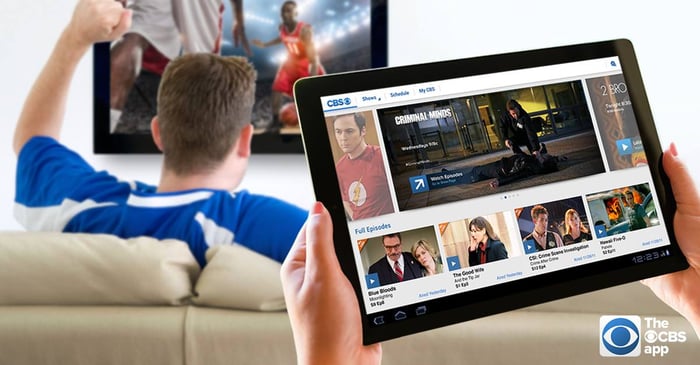 CBS originally launched All Access with access to the network's back catalog of content, and it was able to stream most live content from affiliate networks. However, CBS didn't have streaming rights to NFL games available on its broadcast networks and affiliates, which was a big hole in its offerings.

CBS and the NFL agreed to terms a couple of years ago, and this year's Super Bowl was CBS All Access's best day of customer sign-ups ever. Management also noted that big events like the Grammy awards provided a boost in engagement on its streaming apps. Having the technology to support All Access streaming of big live events like those gives CBS additional leverage to obtain the rights to more big events in the future.

On top of those big live events, the company is also investing in more originals for All Access as well as Showtime. The number of originals on All Access will grow from four in 2017 to 11 this year. Likewise, the company will produce 30% more hours of content for Showtime this year compared to last year.

Ramping up original productions and buying the rights to big events isn't cheap. Just ask Netflix (NFLX -1.12%), which saw its content expenses climb to $7.5 billion last year and its cash flow tank as a result of its investments in originals. CBS is taking a much more conservative path than Netflix, or even Disney, for that matter.

CBS has looked to offset production costs in several ways. It licensed the international rights to Star Trek: Discovery to Netflix before it even debuted the series on its own platform. In fact, the licensing revenue alone made the series profitable before CBS could even attribute a single sign-up to the show.

Disney, by comparison, plans to retain all of its content rights for its streaming services. It's foregoing hundreds of millions in high-margin revenue in order to increase the potential growth of Disney+ and Hulu. That will have a negative impact on the company's bottom line in the short term.

CBS is also considering additional ways to offset the costs of original productions or otherwise hedge its costs. One idea Ianniello expanded upon during the company's fourth-quarter earnings call is using its broadcast network as a second window for All Access originals, driving further uptake to the subscription service in a similar manner to more traditional syndication.

Meanwhile, CBS is still open to using its television and film studio to produce content for other services. It's even producing content for Disney+. Doing so hedges CBS's bets on producing its own content, enabling it to take more risks with content on All Access and Showtime.

CBS was able to deliver all-time highs in revenue and adjusted operating income during the fourth quarter and for the full year in 2018. The direct-to-consumer business was a key part of that, and the company's strategy to grow it while controlling the costs associated with it is paying off well.