A while back, wireless technology giant Qualcomm (NASDAQ:QCOM) unveiled its first commercial 5G cellular modem, known as the Snapdragon X50. The chip was a 5G-only modem, meaning that it needed to be paired with another modem (like the ones embedded in the company's Snapdragon applications processors) to handle 4G, 3G, and 2G connectivity.

On Feb. 19, however, the company announced its second-generation 5G modem, known as the Snapdragon X55. This modem not only supports 5G connectivity (and it's improved over what the company offered with the Snapdragon X50), but it can also work with older networks, too. 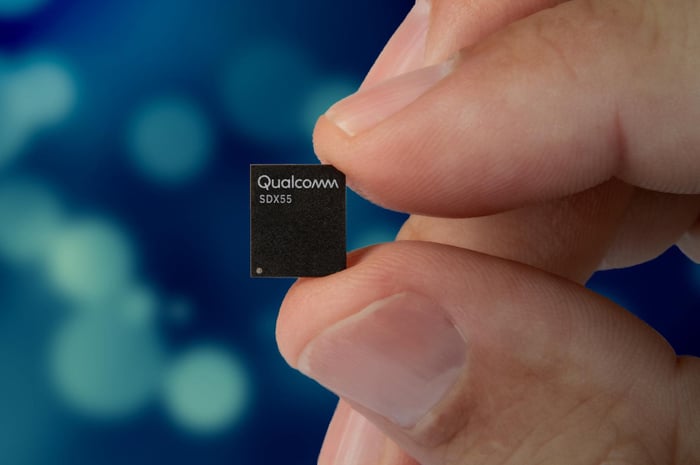 Let's take a closer look at some more of the big-picture improvements that Qualcomm is bringing with this modem and why investors should care.

The move to 7-nanometer technology should allow for improved power efficiency and smaller chip area, all else being equal. (Note that I didn't say relative to the Snapdragon X50, because Qualcomm may have taken advantage of the additional area and power headroom to add more features and capabilities.)

Given that the Snapdragon X55 will primarily be powering smartphones -- devices that are fundamentally space and power constrained -- the transition to the latest 7-nanometer technology is a good thing for the product.

Another thing worth mentioning: Qualcomm didn't explicitly name the manufacturer of the modem, but I believe that TSMC (NYSE:TSM) will be building this chip and not Samsung (NASDAQOTH: SSNLF). Qualcomm and Samsung have talked up their partnership for future 5G solutions at length, so the fact that Qualcomm is mum on the manufacturer of this chip (rather than shouting from the rooftops that Samsung will be mass-producing 7-nanometer chips for Qualcomm) tells me that it's TSMC, not Samsung, that's building this product.

The wireless chip giant says that the Snapdragon X55 is "currently sampling to customers and expected to be in commercial devices by late 2019." What this means is that from a financial perspective, the Snapdragon X55, as well as any applications processor that Qualcomm releases with the Snapdragon X55's technology integrated inside, is really more of a calendar year/fiscal year 2020 story.

Why investors should care?

There are several reasons that investors should care about this product announcement. First, it shows that Qualcomm is still at the top of its game in terms of modem technology -- the Snapdragon X55 appears to be the most advanced cellular modem that's been announced. Having a strong position in modem technology should serve to fortify the company's competitive positioning in mobile applications processors (chips that have integrated modems).

Second, Qualcomm executives have indicated in the past that the migration to 5G offer the company both an opportunity to sell a richer mix of products as well as to grow its content share within smartphones. I think the Snapdragon X55 as well as applications processors that integrate it inside, coupled with the RF front-end solutions that Qualcomm is offering alongside the chip, should help Qualcomm boost both its mobile processor average selling prices as well as lead to a solid boost in per-smartphone dollar content.

These things could ultimately fuel the growth in Qualcomm's chip business in the years ahead, helping to offset a smartphone market that seems to continue to be suffering from unit shipment declines.