According to the data available in S&P Global Market Intelligence, IBM (NYSE:IBM) hasn't booked an impairment of goodwill in 29 years -- from 1989 to 2018. Big Blue has made 178 acquisitions in that time, spending at least $77 billion in the process. 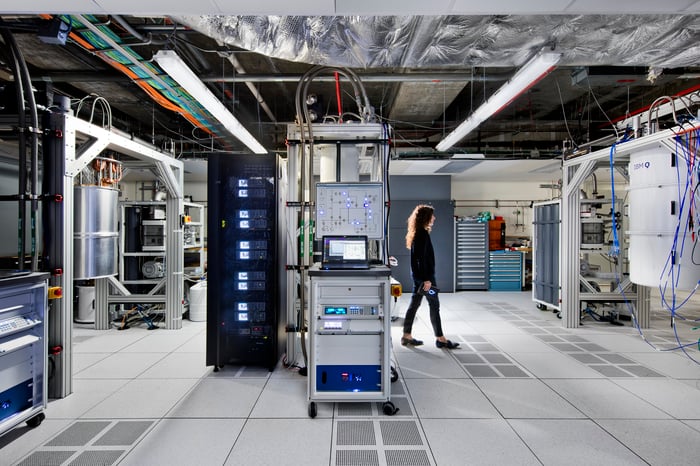 What's goodwill, you ask? In the simplest terms, it's the excess paid above fair market value to acquire an asset, usually a business. In the case of Red Hat (NYSE:RHT), IBM is paying $33.8 billion to acquire the company. Since Red Hat was trading for $20.5 billion in market cap at the time of the deal, it's a good bet that IBM will be adding at least $13 billion more in goodwill and intangible assets to its balance sheet, likely bringing the total carried to over $50 billion.

The table below shows why this matters. Since 2015, over 30% of IBM's assets have been rolled up in intangibles such as patents, customer lists, brand names, product reputation, market share, and the like.

The bad side of goodwill

In the short term, paying for goodwill is easy to justify. Again, take Red Hat. Not only is the company a leading provider of open-source tools and software, it also has the leading brand name in Linux, which is one of the world's most used operating systems and essential infrastructure for today's corporate computing environments. The company also has relationships with a huge number of developers, serves large, long-term accounts, and produces close to $1 billion in excess cash flow annually. You could reasonably argue that IBM is paying a fair fee for one of the best companies in tech. I find it extremely unlikely that IBM will ever have to write down its investment in Red Hat.

If only that mattered.

Here's the problem. Public companies no longer get to amortize and retire goodwill as they once did. In fact, according to accounting standards, each year management is required to test the value of its acquired assets and determine whether fair value has dropped enough to force an "impairment," a write-off to earnings equal (roughly) to the excess fair value that's been forfeited. Each time IBM rolls up a new deal, the odds of an impairment of goodwill increases, especially on the fair value of businesses that were acquired many years ago and that may no longer be central to selling Big Blue's products and services.

So far, IBM has avoided writedowns by keeping and using the tech it's acquired. But if you read the annual report, that may be changing:

In the fourth quarter, the company performed its annual goodwill impairment analysis. The qualitative assessment illustrated evidence of a potential impairment triggering event as a result of the financial performance of the Systems reporting unit. The quantitative analysis resulted in no impairment as the reporting unit's estimated fair value exceeded the carrying amount by over 100 percent.

This same language appears in IBM's annual reports for 2013, 2014, and 2016. It's at least possible that a portion (or all) of the $1.862 billion in goodwill assigned to the systems unit as of Dec. 31, 2017 could be written down in the coming quarters or years. At the very least it's a warning sign since IBM has never suffered a writedown of goodwill and since it is stockpiling goodwill much faster than revenue.

But it's actually worse than that. According to data supplied by S&P Global Market Intelligence, since 1990, IBM's revenue is up 0.52% annualized while net profit is up 1.43% annualized, and cash flow from operations is up 2.58% annualized. Goodwill and intangibles? Up 8.41% annualized over the same period. Investors holding IBM stock throughout that 28-year period would be up 338.6%, versus 740.5% for the S&P 500. Even with all those pricey acquisitions, you'd have done better with simple indexing than you would have buying and holding IBM stock.

Where this has happened before

If you're thinking that this analysis may be a long road to nowhere, I'll admit that you could have a point. There's no sure way to tell whether IBM management is due for a goodwill writedown. And yet I think it's worthwhile spending some time under the hood in cases like these. Investors can pay a steep price when years of accumulated goodwill become an anchor too heavy to carry. Consider what's happened to General Electric (NYSE:GE). A $10 billion-plus deal for Alstom has gone horribly wrong in recent years, forcing a $23 billion markdown of goodwill late last year.

I wouldn't presume to say IBM is in a similar position, but I'm confident enough that Big Blue will shed some goodwill in the next two years that I've shorted the stock in my CAPS portfolio. So I hope you don't own IBM stock. But if you do, I hope that I'm wrong.