The meal kit maker is offering a new line of high-priced condiments.

Did Blue Apron (APRN 0.99%) really think its new Knick Knacks meal kits would resolve its image problem as an overpriced dinner solution? If so, it is likely to be disappointed. The $7.99 Knick Knacks kits give customers a recipe and pre-portioned spices, sauces, grains, and dairy ingredients, but without including the protein and produce that come with regular Blue Apron kits, it seems like there's a lot missing and a price tag that's not cheap.

Much of Blue Apron's difficulty in remaining a viable business has been the high cost of its meal kits, regardless of whether you sign up for a subscription or buy them online. Part of the rationale behind its partnering with Walmart's (NYSE: WMT) Jet.com was the potential for luring higher-income customers into buying its kits. 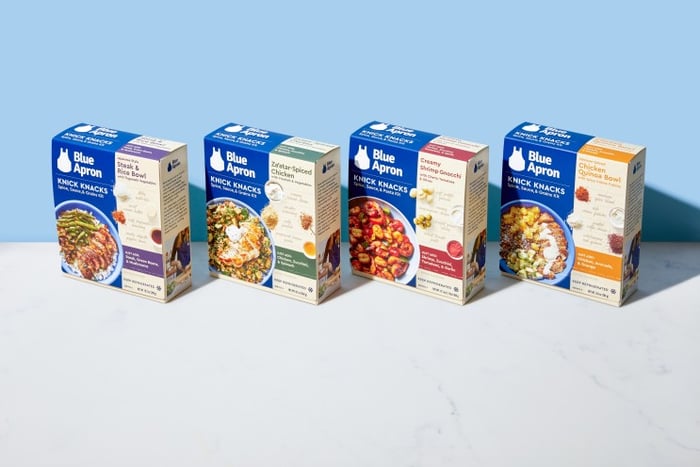 The Knick Knacks kits are exclusive to Jet and cost only $7.99 -- a sizable discount to the price of Blue Apron's regular kits, which run anywhere from $17 to $21 for two servings -- but the catch is the kits don't come with any protein or produce. You have to buy them separately. All you're getting is seasonings, sauces, and a recipe.

According to a Blue Apron blog post, "Knick Knacks will feature a combination of pre-portioned spices, sauces, grains, and dairy ingredients from Blue Apron's premium suppliers, such as creme fraiche from Vermont Creamery, furikake from Mara Seaweed, and preserved lemon puree from NY Shuk, as well as Blue Apron's own proprietary products, such as its line of custom spice blends."

Admittedly not many people are going to have furikake (a Japanese seasoning that, according to Wikipedia, "typically consists of a mixture of dried fish, sesame seeds, chopped seaweed, sugar, salt, and monosodium glutamate") in their spice rack, but it's just as likely few have missed sprinkling it on their rice and seafood before now. And at a cost of $8 for the kit, when they still have to go out and buy their protein and vegetables to go with it, fewer still will be buying it.

The premise behind meal kits is that they take a lot of the hassle out of preparing dinner. The ingredients and directions you need to make a meal for two is included in the kit, all you have to do is cook it. For a time-pressed home chef, being able to have a meal on the table within 30 minutes makes them worthwhile for many.

The failing of subscription services like Blue Apron and rival Hello Fresh, however, is that you're typically only getting two or three meals a week and at a significantly higher cost. You still have to go grocery shopping for the rest of your meals, which is why selling kits through supermarkets like Walmart and Kroger that sell them more cheaply than the subscription services makes more sense: You're already there doing your grocery shopping and picking up a few kits takes the drudgery out of at least a few meals.

Selling pricey packaged condiments, on the other hand, makes almost no sense. Sure, you might find a few culinary wizards regularly looking for exotic ingredients to spice up a dish, but that can hardly be sufficient to make a sustainable business out of.

Shares of Blue Apron have been on a tear since it said a partnership with WW (NASDAQ: WTW), the former Weight Watchers International, has seen "higher than expected demand." In the past month, the meal kit maker's stock is up more than 50%, and it's risen some 150% over the past year.

Yet that response is not very satisfying because we don't know what Blue Apron's management was originally expecting WW demand to be, so being higher than where they thought it would be isn't saying much.

I've argued elsewhere that ultimately the partnership numbers will likely be underwhelming, and that Blue Apron's plan to essentially stop trying to market to new subscribers is a poor plan if it still has designs on growing. Knick Knacks isn't a very good one either, especially when you realize it's basically eliminated the "meal" portion of its meal kits.