Congratulations, you got into the college of your dreams. It's an accomplishment, and something to be proud of. Unfortunately, it could also be the beginning of your financial downfall.

When you open the acceptance letter, you probably don't picture what happens a few years later when you're a college graduate saddled with student loans. Many people don't do the math to figure out whether a degree from a pricey and prestigious school will pay off in higher enough earning power to justify the added expenses.

Thinking that way may feel like pre-emptively raining on your own parade, but it's something a lot of people wish they had done. Nearly three-quarters of Americans with student loan debt (74%) "wish they had done more to minimize the burden of their student loans" according to the new Student Lending Survey released Citizens Bank. 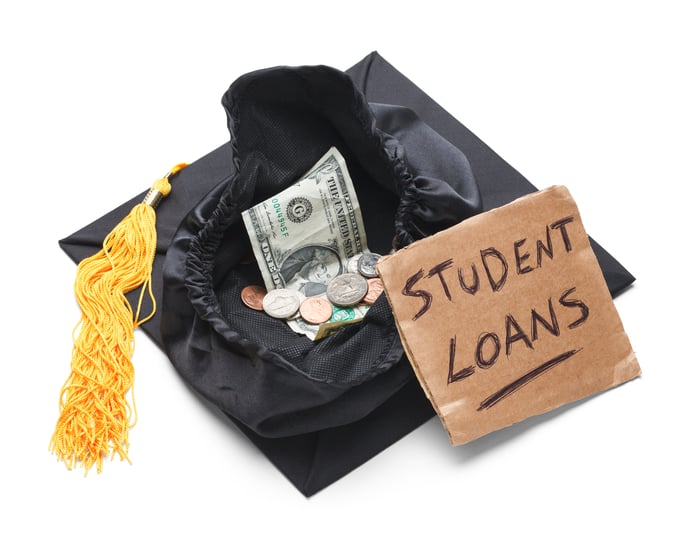 You may not want to take on as much student loan debt as many students do. Image source: Getty Images.

The biggest issue may be that students and their parents don't talk about the consequences of taking on student loan debt. In fact, 53% of those surveyed believed that they would have incurred less debt if they had talked with their parents sooner. Of course, many don't have the talk because (according to 61% of respondents) their parents "don't have a full grasp" on what paying for college is like today.

"As students and parents prepare for the college journey, thinking about how they're going to pay for their education is overwhelming and is weighing on them," said Citizens Bank President of Consumer Deposits and Lending Brendan Coughlin. "Students need to have a plan before they start their college career, weighing their financing options so they can choose the plan that best meets their needs."

Students heading to college soon can learn from the mistakes of those who came before them. The survey showed the top advice respondents would give to themselves if they could go back in time:

"Although the education financing process may seem overwhelming and stressful for students beginning their college journey, not fully understanding the impact of the college they choose and resulting student loan debt for life after graduation is far worse," Coughlin said.

Parents have a responsibility to discuss the harsh realities of life with their children. When it comes to student loans, that means working through the options and considering whether the better long-term choice might be going to a less expensive school or doing two years at a community college in order to save money.

These aren't fun discussions, because sometimes they mean telling your child what they want isn't what they should have, even if it's technically possible. That, unfortunately, is a responsibility parents should be embracing, because their vigilance could literally change the course of their child's life.