Please ensure Javascript is enabled for purposes of website accessibility
Log In Help Join The Motley Fool
Free Article Join Over 1 Million Premium Members And Get More In-Depth Stock Guidance and Research
By Steve Symington – Updated Apr 22, 2019 at 10:40AM

The craft brewer still has work to do, but the market couldn't be more pleased.

With shares up more than 13% in Thursday's trading as of 2:44 p.m. EST, let's take a closer look to see how Boston Beer ended 2018, as well as what investors should be watching in the year ahead. 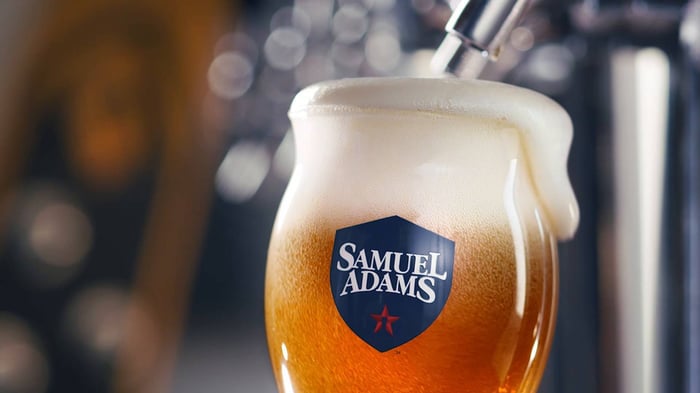 We are still seeing challenges across the industry, including a general softening of the craft beer category and retail shelves that offer an increasing number of options to drinkers. We continue to work hard on our Samuel Adams brand messaging, focusing on communicating our artisanal care in the brewing of Samuel Adams Boston Lager. While it's still early, it appears that our new advertising campaign has noticeably improved Boston Lager's trends. We plan to continue to invest in this campaign in the coming months, with the goal of further improving trends and returning Samuel Adams to growth.

CEO Dave Burwick noted that, similar to the past few quarters, depletions growth in Q4 came as declines from the company's core Samuel Adams brand were more than offset by growth from its Truly Hard Seltzer, Twisted Tea, and Angry Orchard varieties. Burwick added:

Truly continues to grow beyond our expectations and we continue to work hard to grow distribution across all channels while building a strong brand. We are committed to maintaining and improving our position as a leader in the emerging segment of hard seltzer as more competitors enter. [...] Our overall plans for 2019 include significant investments in the second year of our successful 2018 innovations, which include Angry Orchard Rose, Truly Berry Variety Pack, Truly Wild Berry, Sam'76 and Samuel Adams New England IPA. These five new innovations in 2018 are within the top product introductions in their combined categories. In 2019, we plan to build upon these successful innovations with three additional brands that address important health and wellness opportunities in our categories.

In particular, those additional brands include 26.2 brew, a gose beer made with sea salt targeted to runners, Wild Leaf Hard Tea, an alcoholic tea with lower calories and sugar, and Tura Alcoholic Kombucha, an organic kombucha with live probiotics and real fruit. The national launch of the first two of these brands is already in its early stages, while Tura will launch later in the quarter on a more limited basis.

"To date, the response from our distributors, retailers, and drinkers on these new brands has been positive, but it's too early to draw conclusions on the long-term impact," Burwick cautioned. "We're in a very competitive business and we remain optimistic for continued long-term growth of our current brand portfolio and innovations."

For the full-year 2019, Boston Beer expects adjusted (non-GAAP) earnings per share of between $8.00 and $9.00, assuming depletions and shipments growth of between 8% and 13% (consistent with preliminary guidance provided in November for high-single-digit to low-double-digit growth), and national price increases of between 1% and 3%, an improvement from its previous outlook for between 0% and 3%. Boston Beer also reiterated its prior guidance for 2019 gross margin of between 51% and 53%, compared to 51.4% in 2018.

In the end, this was a straightforward quarterly beat and raise with progress in key areas of the business, complemented by the promise of incremental growth from several compelling new products. Boston Beer stock is understandably rallying in response.