Dredging is dirty work, but somebody's got to do it -- and no one does more dredging work than Great Lakes Dredge & Dock.

Do you like reading about new analyst stock upgrades? Well, today you're in luck, because this one's going to be a two-fer of new news. In today's column, I'm going to tell you about a stock you've probably never heard of -- Great Lakes Dredge & Dock (GLDD -1.43%) -- recommended by an analyst that you've never heard of, either: CJS Securities.

(Well, probably never heard of -- unless you read this article last year.)

Great Lakes reported its fiscal Q4 and full-year 2018 earnings yesterday. The news was warmly received, with the stock rising 2.4% in response. This morning, White Plains, New York-based CJS Securities announced it is upgrading Great Lakes shares to market outperform, and as of 2 p.m. EST, the stock is up more than 4% in response. 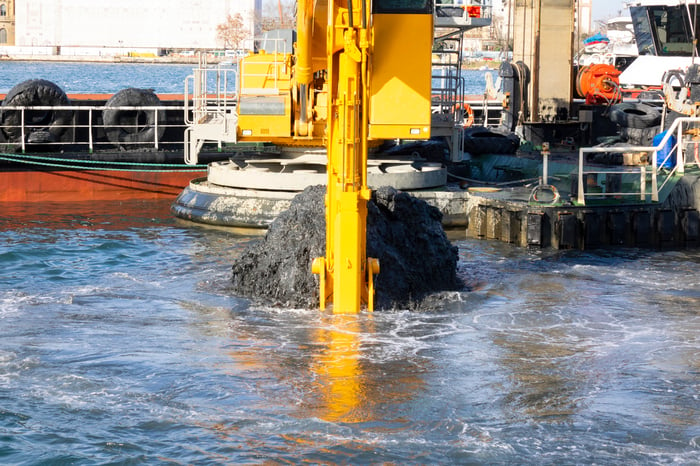 Dredging a river is dirty work, but somebody's got to do it -- and no one does more dredging work than Great Lakes Dredge & Dock. Image source: Getty Images.

But let's take a step back. As I said, most people probably have never heard of Great Lakes before, so perhaps a few words of introduction are in order?

As its name suggests, Great Lakes Dredge & Dock focuses on providing dredging services in U.S. waterways and ports, enabling boats and ships to more easily navigate such waterways and reach their docks. In fact, the company is the largest provider of dredging services in the U.S., and also "the only U.S. dredging service provider with significant international operations," according to its 10-K filing with the SEC. (Great Lakes also has an environmental and infrastructure division, which focuses on the demolition of buildings -- but it's selling that one.)

Great Lakes is a consistent winner of contracts from the U.S. Army Corps of Engineers for government-sponsored dredging projects. On the last day of December 2018, for example, the company won one of its largest dredging contracts ever, a $92.6 million Corps of Engineers award to dredge channels approaching the Port of Corpus Christi, Texas.

Why CJS likes thinks Great Lakes is so great

Details regarding CJS' upgrade were sparse, but it may have been encouraged by Great Lakes' earnings results. So how did the company perform in Q4? There actually appears to be some confusion on that point. Yesterday, Great Lakes reported earning $0.14 per share pro forma for fiscal Q4. GAAP results, however, showed a $0.12-per-share loss.

Working off a "Zacks Consensus Estimate" of $0.01 per share in profit, Zacks Equity Research called this performance an earnings beat, inasmuch as the $0.14 pro forma profit was better than analysts' projected $0.01 pro forma profit. Conversely, StreetInsider.com (subscription required) cited analysts predicting a $0.01-per-share GAAP loss for Great Lakes, and concluded that the company's $0.12-per-share GAAP loss was $0.11 worse than projected -- and thus an earnings miss.

(Incidentally, this confusion illustrates why we at The Motley Fool suggest you don't spend a lot of time worrying about analyst estimates. Instead seek out companies that simply and clearly give you a perfect earnings report, and let the analyst estimates fall where they may.)

Despite all this confusion, investors on balance appear to have decided that Great Lakes' report was a good one, bid the stock up yesterday, and are bidding the stock up once again today. Is this the right call?

It might be. Consider a few numbers culled from Great Lakes' full-year results.

In 2018, Great Lakes grew its annual revenue a modest 5% to $620.8 million. Gross profit margin earned on that revenue, however, more than doubled to 18%. Admittedly, the company still ended the year with a GAAP net loss of $6.3 million. Most of this loss, however, was attributed to the environmental and infrastructure division that has been marked for sale, and is now classified as "discontinued." As for its continuing dredging operations, Great Lakes says those ended up earning an $11 million net profit for the year.

Assuming it can keep that up, $11 million in net income on Great Lakes' $500 million market capitalization gives the stock a P/E ratio of about 45 -- kind of pricey for a company like Great Lakes, which has historically eked out a low-single-digit-percentage operating profit margin. That being said, with its deeper focus on dredging, and gross margin perking up, the latest analyst estimates quoted on S&P Global Market Intelligence show that Wall Street is looking for the company to earn a GAAP profit of as much as $0.44 per share this year. On an $8 share price, that yields a much more palatable forward P/E ratio of just 18.2.

Can Great Lakes grow fast enough to justify that more modest valuation? Management says it now has roughly one full year's worth of work in backlog -- $707 million. Even assuming that's all the work it wins this year, if the company were to get it all done in 2019, this would represent 14% revenue growth over the $621 million in revenue that its dredging division did in 2018.

Throw in a bit of profit margin improvement, and yeah, I think Great Lakes could conceivably grow fast enough to deserve a P/E of 18 -- and become what CJS says it is: a buy.