A robust fourth quarter and healthy 2019 outlook are propelled by a lucrative fleet addition.

Norwegian Cruise Line Holdings ( NCLH -4.54% ) reported record fourth-quarter revenue and earnings in the final three months of 2018 in its latest earnings report, released on Thursday. The company continues to glide through favorable waters in the cruise industry due to robust demand while capitalizing on new vessels in service. In the discussion that follows, note that all comparative numbers are presented against the prior-year quarter (the fourth quarter of 2017). 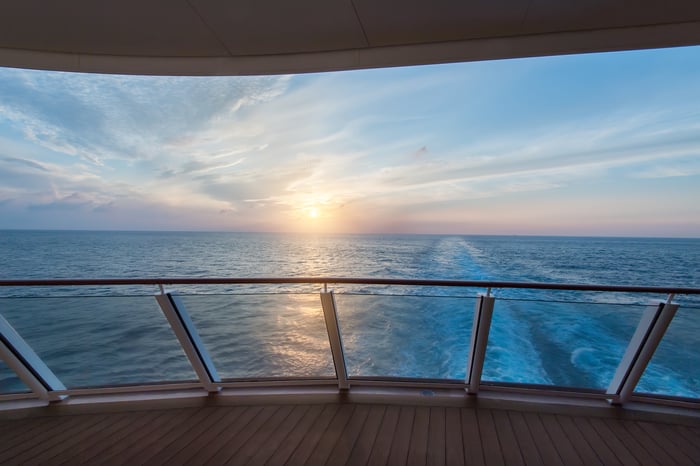 Norwegian has enjoyed momentum from favorable conditions in the cruise industry and its recent launch of the Bliss. In the company's earnings press release, CEO Frank Del Rio both lauded recent results and projected a high degree of confidence in the coming year:

The team at Norwegian Cruise Line Holdings delivered a breakout year in 2018, once again generating industry-leading record financial performance. Strong global demand for our portfolio of brands, the successful, record-breaking introduction of Norwegian Bliss and the flawless execution of our demand creation strategies drove our fifth consecutive year of double-digit earnings-per-share growth. Building on this momentum, we entered 2019 in the best booked position in our Company's history, with pricing above prior year's record levels. The strong start to this year's WAVE [early booking] season, coupled with our moderate in-year capacity growth and our solid booked position across our three brands, has us well-positioned to continue driving price throughout the year and into 2020, where we will also benefit from the first full year of sailings from Norwegian Encore and the addition of Regent's Seven Seas Splendor.

Norwegian provided its outlook for both first quarter and full year 2019 alongside earnings. The company projects that net yields will grow approximately 2% in the first quarter and increase between 2.5% and 3.5% for the full year.

Norwegian Cruise Line's earnings projections anticipate solid growth. However, the company's favorable booking position at the outset of 2019, coupled with recent onboard spending trends and the success of the Norwegian Bliss, may imply that higher earnings expansion is possible this year. Thus, shareholders shouldn't be completely surprised if management favorably revises full-year estimates at least once in the coming quarters.