Please ensure Javascript is enabled for purposes of website accessibility
Log In Help Join The Motley Fool
Free Article Join Over 1 Million Premium Members And Get More In-Depth Stock Guidance and Research
By Daniel Sparks – Updated Apr 10, 2019 at 11:16AM

The electric-car maker says it has already addressed most of the Model 3 issues detailed by the product-rating company.

CR's decision to no longer recommend Model 3 comes as the company is ramping up production of the important vehicle and expanding deliveries to Europe and China. With Model 3 expected to account for about three-fourths of Tesla's vehicle deliveries in 2019, it's easy to see why this news could rattle some investors.

Fortunately, Tesla says it has already addressed most of the issues listed by CR. 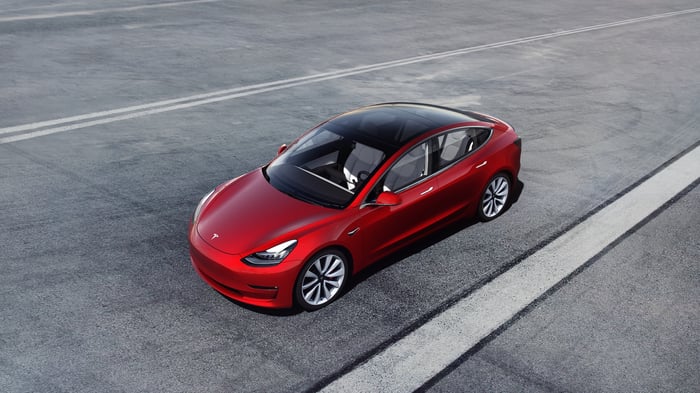 Consumer Reports' issues with the Model 3

Model 3 owners in our spring survey sample reported some body hardware and in-car electronics problems, such as the screen freezing, which we have seen with other Tesla models. The latest survey data also shows complaints about paint and trim issues. In addition, some members reported that the Model 3's sole display screen acted strangely.

Glass defects were also a problem for some owners, Olsen said.

There was one important area, however, where Tesla continues to perform well when it comes to reliability. Buried in the last paragraph of CR's news release about Tesla's reliability ranking, Olsen wrote, "By contrast, CR members have reported few problems with Tesla's unique electric powertrains, which may be due in part to their relative simplicity when compared with traditional internal-combustion engines."

The electric-car maker was quick to respond to the Model 3's below-average reliability ranking, pointing out to media that -- just a few weeks ago -- CR ranked the Model 3 as having the highest owner satisfaction of any car. The automaker also pointed to each of its vehicles' safety ratings with the National Highway Traffic Safety Administration (NHTSA); all three of its current models -- the Model S, X, and 3 -- have five-star overall ratings and five stars in every category and subcategory.

Responding to the specific Model 3 problems detailed by CR, a Tesla spokesperson said: "This new data from Consumer Reports comes from their annual Owner Satisfaction survey, which runs from July through September, so the vast majority of these issues have already been corrected through design and manufacturing improvements, and we are already seeing a significant improvement in our field data."

Model 3 vehicles that were delivered before the end of September were the byproduct of a wild production ramp-up. Tesla went from producing just 28,578 Model 3 units in the quarter ending June 30, 2018 to 53,239 units in the quarter ending Sept. 30, 2018. Since then, production volume of the new vehicle has stabilized at levels slightly above what was seen in the third quarter of 2018. Tesla produced 61,394 Model 3 vehicles in the fourth quarter of last year and it expects production to steadily increase throughout 2019.

Hopefully, Tesla can double down on quality in 2019 as its Model 3 production levels stabilize at more consistent levels.