Here's why Wall Street is ignoring the red ink.

Wayfair (W -3.60%) co-founder and CEO Niraj Shah ought to send Amazon leader Jeff Bezos a letter thanking him for convincing Wall Street that it's OK to take on massive losses if it means growing defensible long-term market share.

If ever a company followed the blueprint set out by Amazon, it would be Wayfair. That makes sense, given that both are e-commerce players with a laser-focus on logistics. The difference, of course, is that Wayfair is focused on home furnishings, while Amazon is going after...everything else. 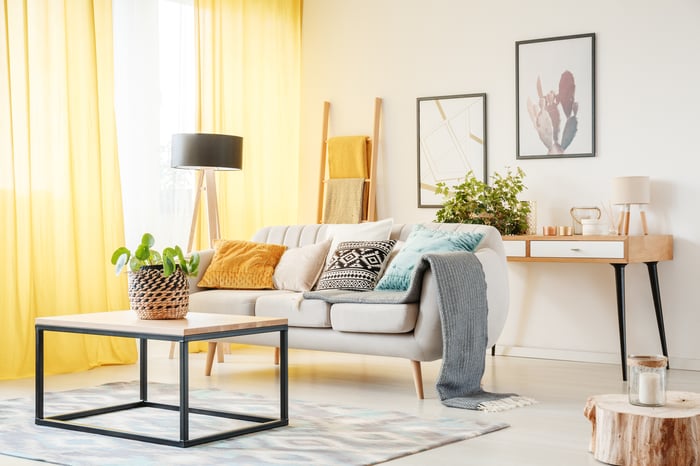 If this week's earnings release says anything, it's that Wayfair is finding success with the aim-for-the-long-term approach.

Before we dig into the numbers, let's review the headline numbers for the company's fourth quarter.

Ordinarily, numbers like that would send investors running for cover. Sales increasing 40% while losses widen by almost a factor of two? But for now Wall Street is willing to accept the trade-off. The stock is up 27% at 2:45 p.m. on Friday. The real reason for the wider losses is investments the company is making in its own infrastructure. Spending on sales, operations, technology, general, and administrative expenses increased 65% to $266 million, representing by far the biggest reason for the wider loss.

But Wayfair is doing this because it sees an enormous opportunity, and evidence that its current success is defensible. Let's tackle these two one at a time.

And Wayfair is already having success in its first three international markets: Canada, the U.K, and Germany. "We see clear parallels in the progress of our businesses in Canada, the United Kingdom and Germany and the successful course of Wayfair.com in the U.S. at similar stages of development," said Shah. And Wayfair has reason to be excited: In 2018, Wayfair captured 35% of all e-commerce growth in home furnishings.

Of course, none of that would matter if competition could swoop in and start eating away at this advantage. But Wayfair is demonstrating a two-pronged moat in this realm: the strength of its brand and its fulfillment network.

On the brand awareness side, total active customers grew by 38% to 15.2 million. But even more important is the fact that those customers are largely sticking with Wayfair for further purchases. Total orders by repeat customers grew 51% to 5.8 million, outpacing total order growth.

What this means is that customers are exceedingly satisfied with their Wayfair experience. That's thanks in no small part to the fulfillment network Wayfair has built out. There are currently eight CastleGate warehouses in the U.S., Canada, U.K, and Germany combined, along with seven cross-dock centers and 34 last-mile home delivery locations. The bottom line is this: Few companies have the resources to compete with Wayfair's network now. The internal costs for guaranteeing such fast delivery would be prohibitively expensive for most.

There will continue to be extensive investments in warehouse space in 2019. Roughly 3 million square feet will be devoted to the domestic expansion of CastleGate, 1 million to international CastleGate warehouses, and another 1 million toward last-mile delivery.

The company expects revenue in the first quarter to grow at a mid-point of 35.5% to $1.88 billion. Of that, sales growth in the United States is expected to come in at 34.5%, and international growth is expected to register near 37.5%. All of that being said, management also disclosed that first-quarter growth is currently trending above 40%, so the company may well surprise investors when its numbers are announced in May. International revenue is also growing at over 50% on a constant-currency basis. No matter how you cut it, customers are clearly flocking to Wayfair.