Please ensure Javascript is enabled for purposes of website accessibility
Log In Help Join The Motley Fool
Free Article Join Over 1 Million Premium Members And Get More In-Depth Stock Guidance and Research
By Lou Whiteman - Updated Apr 23, 2019 at 11:18AM

The loss of a major customer sinks fourth-quarter results and 2019 outlook.

Onetime highflier XPO Logistics (XPO 0.24%) has had a difficult run of late, as a third-quarter miss followed by a blistering criticism from short-seller Spruce Point Capital caused XPO shares to lose more than half of their value since Oct. 1.

The company's fourth-quarter results added to those woes, with XPO managing to find new ways to underperform separate from the issues that plagued it earlier in the year.

Given the run of poor results, it's fair to ask whether the best is over for this stock, which despite the recent declines has still doubled over the past three years and is up more than 1,000% since 2011. To try to determine what current, and potential, XPO investors should do today, here's a look at the recent results and what management has to say about the future. 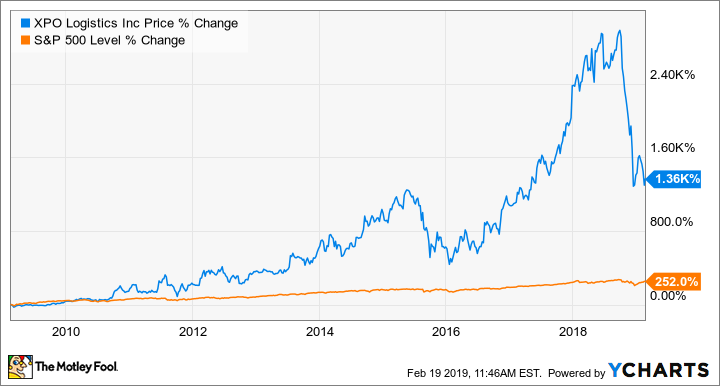 XPO posted fourth-quarter adjusted earnings of $0.72 per share on revenue of $4.39 billion, falling short of the consensus estimate of $0.84 per share in earnings on revenue of $4.55 billion. Organic revenue was up 9.3% from a year prior, which was down 120 basis points from third-quarter results but still quite healthy for a transport company.

Management blamed the shortfall on challenges in France and the United Kingdom, and on a significant drawdown by its largest customer. That large customer, who was not named but is believed to be Amazon.com, has apparently decided to move much of the business it was doing with XPO in-house.

XPO management said that it would likely take the next few quarters to redeploy the significant capacity and resources that were previously devoted to that customer. 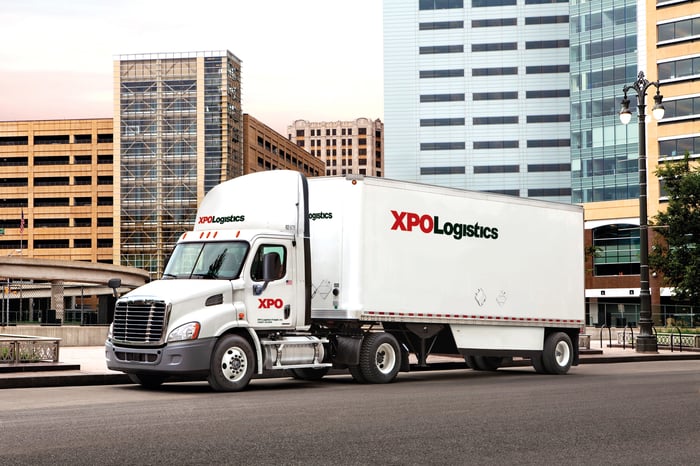 XPO also said that it expects to generate $1.65 billion to $1.725 billion in earnings before interest, taxes, depreciation, and amortization (EBITDA) in 2019, which would be an increase of between 6% and 10% from 2018, but that revised guidance was down from previous expectations for 12% to 15% EBITDA growth. It also said it expects $525 million to $625 million in free cash flow for the year, down from previous guidance of $650 million.

Notably, this longtime mergers and acquisitions machine has seemingly reassessed its strategy. XPO in December, following the release of the Spruce Point report, announced a $1 billion stock buyback. In the fourth-quarter earnings release, XPO said that buyback program has already been completed, announcing a new $1.5 billion authorization to be funded with cash and debt.

CEO Brad Jacobs on a call with investors following the earnings release said buybacks are the priority for now:

We love M&A [mergers and acquisitions]. We have a very good track record of creating significant shareholder value through M&A. But today, even though we spent a lot of time, we're getting very close to concluding a long search for a good M&A candidate, the best M&A target is acquiring our own stock. And that's where we're going to deploy our resources for the foreseeable future, not on external M&A.

The logistics provider for everyone else

Given the damage done by one large customer, XPO spent a lot of time on a call discussing customer concentration. In 2018, the company's top five customers contributed about 11% of total revenue, with that one large customer accounting for nearly 5% of the total. With that customer now cutting about two-thirds of its business with XPO, management expects its top five customers to account for about 8% of revenue in 2019.

"Customer concentration will be less. But when you lose your -- when you lose the majority of your top customer's business, that hurts," CEO Brad Jacobs said on the call. "Nothing you can do -- there's nothing positive. It's only negative."

XPO is one of the most diverse companies in the transport sector in terms of its exposure to different businesses, but the concentration of large customers was an unwelcome surprise. Investors can take some solace in seeing that number trend downward and knowing that few if any e-commerce retailers have the desire and the resources to follow Amazon's lead and take logistics in-house. 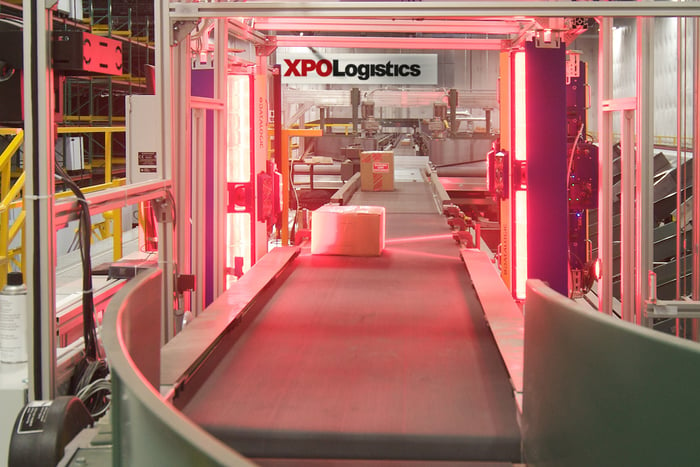 In fact, to my thinking, Amazon is a key part of the bull argument for XPO. As the e-commerce giant moves its logistics operation in-house, it's forcing its online and brick-and-mortar retailers to become more efficient operators.

XPO offers a one-stop-shop for a wide range of shipping, logistics, warehousing, and last-mile services at a scale that few retailers other than Amazon can offer on their own. The company is well-positioned to be the logistics Amazon-alternative for a wide range of retailers looking to streamline operations and bring down prices so they can be an Amazon-alternative to customers.

It's worth noting that while Spruce Point did include worries about growth and the health of the European economy in its list of concerns, the fund's primary issues were centered around alleged financial irregularities and what it described as dubious accounting. So far, those concerns have proven unfounded.

XPO has certainly hit a speed bump, but there is nothing to suggest the underlying business is on shaky ground. Despite the loss of a major customer and its exposure to Europe the company still expects upwards of $600 million in free cash flow in 2019. And while its projected revenue growth of 3% to 5% is well below the double-figures organic revenue growth in 2018, the business is still expected to grow its top and bottom line in 2019.

Last summer, before the trouble hit, XPO was trading at more than 30 times earnings, a valuation that can only be justified by sustainable blockbuster growth. That premium has evaporated, and XPO now trades at a more reasonable 18.7 times earnings, in line with logistics rival C.H. Robinson Worldwide's valuation of 19.3 times earnings and United Parcel Service's multiple of 20. 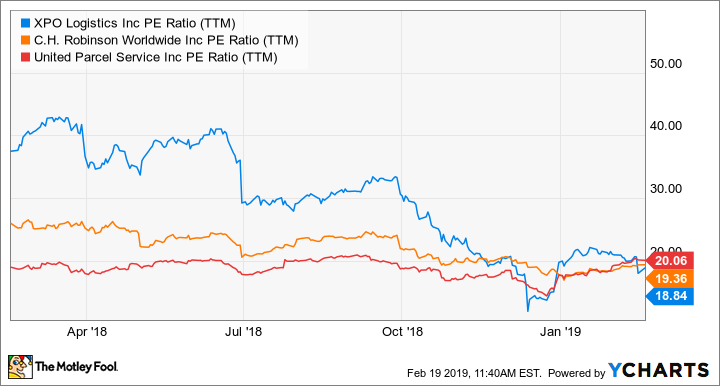 As painful as that reset has been for shareholders, the market has arguably done its job and adjusted XPO's valuation based on the company's stumbles and management's shift away from M&A. Management in the quarters to come needs to show that the company can regain its footing and avoid any additional unwelcome surprises. With that in mind, 2019 appears likely to be at best a forgettable year, but if things go well, it should lay the groundwork for XPO to again focus on growth in 2020.

As an existing XPO shareholder who believes in Jacobs and the management team, I'm holding on. But even after the share-price drop, I wouldn't urge new investors to rush in. XPO has made it clear the reset will take time. It's understandable that a potential investor might want to wait another quarter or two to see how the recovery is going.