Please ensure Javascript is enabled for purposes of website accessibility
Log In Help Join The Motley Fool
Free Article Join Over 1 Million Premium Members And Get More In-Depth Stock Guidance and Research
By Lee Samaha – Updated Apr 23, 2019 at 10:53AM

The dividend investors' favorite faces an uncertain year, but merely achieving near- and midterm guidance would make it a very attractive stock.

Emerson Electric (EMR -0.95%) recently had its first-quarter 2019 earnings call, and one week later held an investor conference where CEO David Farr laid out his medium-term outlook. The key takeaway from both events is that Emerson Electric's immediate guidance has some uncertainty around it, but unless you believe that the global economy will slow notably in the next few years, the stock looks like a good value for income-seeking investors. Here's why.

The first-quarter earnings contained a mix of positives and negatives. On the downside, the net sales increase of 9% was below management's guidance range of 10% to 11%, and it was a similar story on an organic basis. Underlying sales grew 4.5% in the quarter, but management previously expected a figure in the 6% to 7% range. Moreover, the automation solutions and commercial & residential solutions (CRS) segments both experienced margin contraction in the quarter.

No matter. Farr guided toward underlying growth of 6.5% in the second quarter while maintaining full-year underlying sales-growth guidance of 4% to 7% -- and both segments' underlying growth forecasts were left unchanged. Full-year cash flow is still expected to come in at $2.5 billion, and full-year EPS guidance was nudged up to a range of $3.60 to $3.75, from $3.55 to $3.70.

On a superficial level, things look OK, but the question is whether Emerson will hit its guidance.

There are probably three issues to look at. In concert with what Farr said in November, there are concerns around political uncertainty in Europe and growth in China. And it's still not fully clear how oil & gas capital spending (Emerson's automation solutions segment has a heavy-industries focus) will play out with the move from $70 oil to $50 in the last six months.

Farr reiterated the concerns around Europe during the investor day presentation. They mainly relate to political uncertainty potentially causing a delay in investment activity.

Meanwhile, the impact of the slowdown in China has already been felt in the CRS segment. Underlying sales were down 1% in the first quarter, driven by a 23% decline in China.

As director of investor relations Tim Reeves put it during the earnings call, "The decline in commercial and residential solutions was driven by slower heating and air-conditioning markets in China, a trend that began in mid-2018."

However, Farr sees positive signs. "As we look at the last four or five weeks, the week after week after week improvement, we're starting to see the improvement relative to orders coming out of China," he said, which leads him to "feel comfortable with the second half that we mapped out when we laid out our forecast in November."

Farr's optimism is reasonable, but it's early yet.

Emerson's key rival in automation solutions, Honeywell International (HON -0.76%), reported organic growth of only 1% in process solutions in its recent fourth quarter, and its management acknowledged that "oil price volatility in the fourth quarter may have temporarily delayed customer investment decisions."

That said, both companies have expressed confidence in 2019, based on their order books, backlogs, and the general end-market environment.

For example, Emerson's automation-solutions orders were up 12% in the first quarter, with upstream and midstream orders up 15% and LNG up 10% to 15% according to Emerson Electric's presentations. Meanwhile, Honeywell CFO Greg Lewis said during the company's earnings call that "we continue to see solid trends within the automation businesses and process solutions, with total orders up double digits, and short-cycle backlog up over 30%." 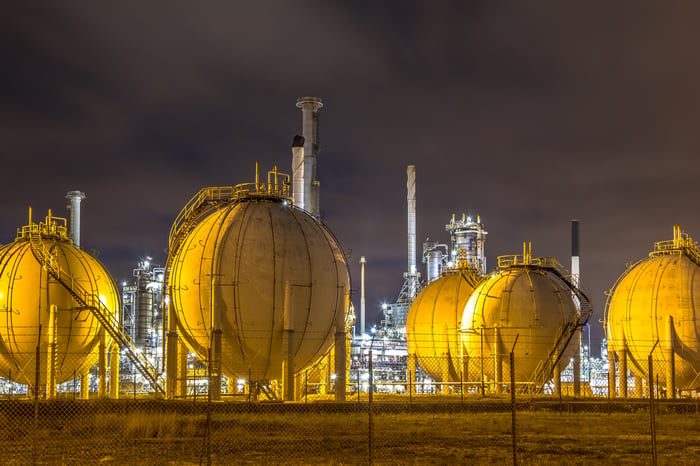 It's far from clear if Emerson's CRS orders from China will continue to bounce back, and oil & gas capital spending is still somewhat contingent on oil price movements. That said, there's enough evidence in the order books of Emerson and Honeywell to suggest they have a reason for optimism.

Turning to valuation, Emerson's guidance for free cash flow (FCF) is $2.5 billion in 2019, growing to around $3.3 billion in 2021. That puts it at a one-year forward price-to-FCF multiple of just 16.7 and less than 13 in 2021. Those are undemanding multiples which makes Emerson look a good value on risk/reward basis. There is risk, but the valuation suggests there's enough margin of safety for investors looking to buy the stock.