Here are some key takeaways from the earnings call.

General Dynamics (GD 0.57%) beat earnings in its fourth quarter of 2018 -- not that you could tell from the performance of its stock, which remains 2% below where it traded before earnings, nearly a month after the fact.

Why were investors so upset with General Dynamics, despite the earnings beat? Part of the answer was the company's guidance for 2019, which fell short of expectations. The $11.60 to $11.70 per share that General Dynamics said it will earn this year works out to only 4% earnings growth over 2018 -- quite a letdown after GD's 17% earnings-growth performance in 2018.

And yet, with a price-to-earnings ratio of just 15, and a price-to-sales ratio of 1.4, General Dynamics is currently, arguably, the closest thing to a "bargain" among defense stocks. So what are the chances GD will find the gas pedal again, and resume growing at a faster pace? 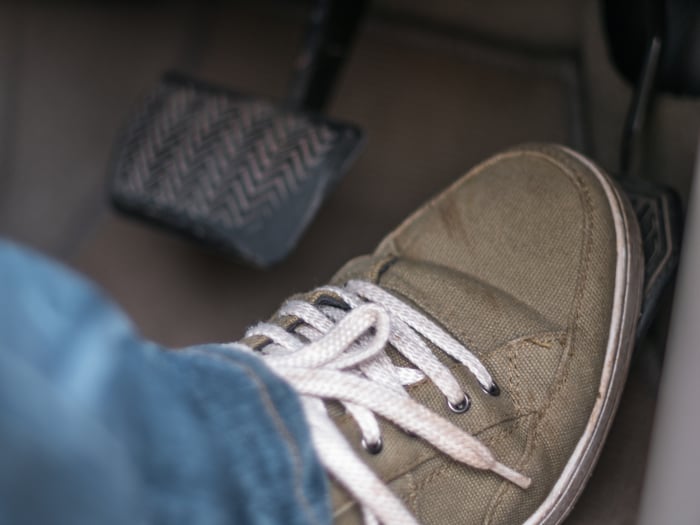 Can General Dynamics step on the gas in 2019? Image source: Getty Images.

Will Gulfstream find its wings?

Aerospace revenue of $2.7 billion was up against the year-ago quarter by an impressive $722 million, that is, 36.4%. This was attributable in large part to the delivery of nine G500s in the quarter, and also a strong fourth quarter in the service centers. For the full year, revenue of $8.46 billion was up $326 million, or 4%. -- General Dynamics CEO Phebe N. Novakovic

While that full-year figure won't win many cheers, Novakovic went on to predict, later in the call, that aerospace revenue will be "about $9.7 billion" in 2019, a 14% increase over 2018 levels, driven by "deliveries of approximately 145 business jets."

Historically General Dynamics' most profitable division, and best known for its Gulfstream business jets, aerospace -- with its increased sales -- is probably the fastest way for General Dynamics to accelerate its rate of profit growth.

Next, combat systems ... We continue to see nice order activity in this group, with fourth quarter orders of $2.19 billion and book-to-bill of 1.3 to 1 in the quarter, and 1 to 1 for the year. Tank orders alone are in excess of $1 billion. We also continue to have significant international opportunities, particularly in Europe. We've been negotiating with Spain with respect to a program valued at $2 billion for Piranha vehicles. -- Novakovic

While General Dynamics is generally thought of as a defense contractor, the civilian Gulfstream business is its secret weapon in battling for profits. But the product the company is probably best known for -- the M1 Abrams main battle tank -- is no slouch in the profit department, either.

General Dynamics' combat systems division, which builds the Abrams, has reliably churned out operating profit margins of 15% or better for the past five straight years. The company's overall profit margin last year was only 12.3%, according to data from S&P Global Market Intelligence.

Accelerating order activity as 2018 progressed, therefore, bodes well for the company's ability to grow total profit faster -- and this potential Piranha deal (Piranha is an eight-wheeled armored personnel carrier, similar to the U.S. Army's Stryker) -- could add as much as four months' worth of revenue to this profitable business.

If you're following the headlines out of Canada, you know there are discussions taking place between the Canadian government and their customer on our armored-vehicle supply contract. As a result of these discussions, we've experienced payment delays that significantly impacted the free cash flow we expected last year. To be clear, this is a timing issue, and we expect to receive the delayed payments this year. Assuming the resolution of this matter, we expect the cash conversion rate well in excess of 100% in 2019. And looking ahead, we expect cash performance throughout the planning horizon to be very strong, in our typical 90% to 100% range. -- Chief financial officer Jason W. Aiken

Speaking of tanks, though, you may recall that back in 2014, General Dynamics Land Systems Canada inked a deal to sell the Kingdom of Saudi Arabia a fleet of some 3,000 LAV 6.0 light armored vehicles worth $13 billion -- a deal facilitated by the Canadian government. Last year, that deal's future was called into question when Canada and Saudi Arabia got into a war of words, with the Canadian government criticizing Saudi Arabia's role in the killing of journalist Jamal Khashoggi, and the Saudis responding that Canada should mind its own business.

This is the "armored-vehicle supply contract" to which Aiken referred -- and at $13 billion in size, it's vital to the continued growth of General Dynamics' important combat systems division. While this has turned into more of a political question than a business question, and nothing in politics is certain, investors can take at least some comfort in Aiken's opinion that this contract remains on track for both fulfillment and payment.

Next, marine systems ... In response to the significant increased demand from our Navy customer across all three of our shipyards, we continue to invest in each of our yards, with particular emphasis at Electric Boat, to prepare for increased production associated with the Block V of the Virginia submarine program and the new Columbia ballistic missile submarine. -- Novakovic

With an operating profit margin of only 9% last year, marine systems isn't General Dynamics' most profitable business, but most years it is the company's biggest or second-biggest producer of revenue -- and there's both good and bad news on that front.

Good news: While President Trump's plan to build a 355-ship Navy may now be on the rocks, at least plans to expand the submarine fleet are still going apace. As the Navy orders new Virginia-class subs, and soon, the even newer Columbia-class ballistic-missile submarine, this should keep General Dynamics' shipbuilding division awash in revenue.

Bad news: The Block V Virginia (let alone the monster-sized Columbia) "is a significant upgrade in size and performance" over the Block IV submarine before it, says Novakovic, "requiring additional manufacturing capacity" to produce. In 2019, says Novakovic, "the marine segment [will] command a larger share of our capital budget." While investors can expect this division to "drive additional revenue" for General Dynamics, it will involve more capital spending (draining free cash flow) as well, especially as "Columbia ... will begin early construction in [the] next year."

With General Dynamics' free cash flow ($2.4 billion) once again badly lagging GAAP earnings ($3.3 billion) in 2018, investors who hope the company's targeted rate of FCF will return to equaling or exceeding earnings may have to wait a bit longer.