Shares of Kosmos Energy (KOS 4.22%) surged on Monday, rising more than 11% by 3 p.m. EST. Fueling the oil and gas producer's rally was its fourth-quarter results and outlook for what lies ahead.

Kosmos Energy reported an adjusted loss of $39.4 million, or $0.09 per share, during the fourth quarter, which was $0.02 per share wider than the consensus estimate. Investors, however, overlooked that miss because the company provided an optimistic outlook for 2019 and beyond. 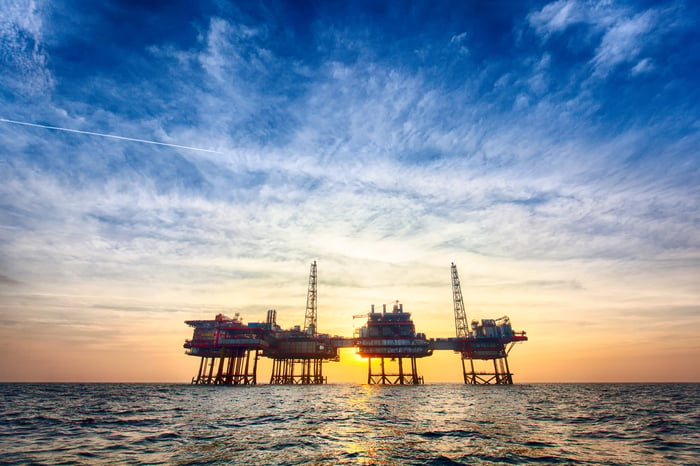 Kosmos Energy stated that it plans to reduce its capital spending range from $500 million to $600 million down to between $425 million and $475 million. Despite that spending reduction, the oil producer believes it can still grow its output at an 8% to 10% compound annual rate through 2021. Further, it can fund capital spending, as well as its newly initiated dividend, on the cash flow it can produce at $35-a-barrel oil.

The company also plans to sell a substantial part of its stake in the Greater Tortue Ahmeyim gas field, which is off the shores of Mauritania and Senegal. The company already sold a large interest in the properties to oil giant BP (BP 2.87%), which now operates the field. However, with BP and its partners recently sanctioning phase 1 of a floating LNG facility to develop the resources, Kosmos is looking to further sell down its stake due to high interest from potential buyers as well as to reduce its capital spending requirements.

Kosmos Energy reported a solid finish to what was a transformational year. The oil company closed a strategic acquisition to enter the U.S. Gulf of Mexico, joined BP in sanctioning phase 1 of Tortue, and generated $250 million in free cash flow, which it used to support its acquisition by repurchasing the shares it issued in association with the transaction. Meanwhile, it's set up for success in 2019 and beyond because it can generate enough cash flow at $35-a-barrel oil to fund a growth-focused spending plan, which positions it to produce significant free cash flow that it can return to shareholders via its new dividend and additional share repurchases. That combination of production growth and increasing shareholder returns makes Kosmos an oil stock to watch in the coming years.