A look at the crucial metrics and qualitative areas investors should scrutinize in the hospitality giant's 2018 year-end filing.

Global hotel franchisor Marriott International (MAR -0.99%) releases fourth-quarter 2018 earnings on Thursday following the end of the day's trading session. Management will likely be happy to close the books on 2018 and move on: A tumultuous second half of the year was characterized by a glitch-ridden launch of the combined Marriott and Starwood guest loyalty programs, and a massive, yearslong data breach of the Starwood guest reservation database that Marriott disclosed on Nov. 30. Below, we'll review four key areas investors should focus on in the upcoming report and accompanying earnings conference call.

1. The health of RevPAR trends

In its third-quarter earnings report released on Nov. 5, Marriott forecast fourth-quarter year-over-year growth in comparable systemwide revenue per available room (RevPAR) of 2%. This worldwide target is made up of 1% growth in North America and 5% to 6% international expansion.

The company's preliminary estimates of RevPAR for full-year 2019, also issued in the third quarter, see just 2% to 3% growth worldwide. At best, then, the initial 2019 estimate simply matches the expected full-year expansion of 3% in 2018.

This 2019 estimate proved disappointing for investors in November, but management did emphasize that the cautious outlook is partly due to macroeconomic factors beyond the company's control. Additionally, it's a preliminary, chalked-in number. Investors will receive a firm 2019 RevPAR estimate on Thursday, and any adjustment of the range beyond 3% will be interpreted positively.

It's unclear how much the Starwood reservation database breach hurt the company in the fourth quarter, and how this might affect 2019 RevPAR estimates, if at all. On one hand, it's possible Marriott could be experiencing some guest mistrust due to the harsh publicity. On the other hand, consumers seem to be almost inured to a regular drumbeat of security-breach announcements from corporations entrusted with sensitive data.

Marriott did issue a statement in January clarifying that the intrusion was not as extensive as it first estimated. The company now outlines an upper limit of guest records affected by the breach at 383 million (down from 500 million). Management also states that while up to 8.6 million encrypted credit cards were involved in the incident, the organization has found no evidence that the hackers were able to break encryption on any payments data. 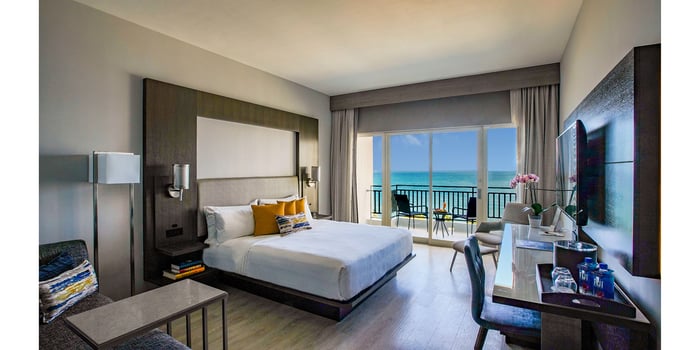 As I've described above, much rides on fourth-quarter RevPAR numbers, as well as projections for the year ahead. Yet it's worth noting that on Marriott's third-quarter earnings conference call, CEO Arne Sorenson pointed out that RevPAR is a somewhat "blunt instrument for measuring success."

While it's an effective metric to gain quick insight into a hotel chain's room-based revenue growth, RevPAR doesn't address the quality of that revenue -- that is, the profit margin associated with the top line.

Sorenson advised investors that Marriott is increasingly interested in obtaining bookings directly on its own platforms versus relying too heavily on online travel agencies for customer traffic. Over the long term, the company is willing to sacrifice some RevPAR growth if it gains more-profitable bookings via its owned channels. Look for more discussion on this topic in the context of projected 2019 results during the upcoming earnings call.

Shareholders should see a decent amount of net room additions to Marriott's base completed over the last three months. If the hotelier meets its fourth-quarter targets, net room additions for full-year 2018 will improve 5% over 2017. In its preliminary 2019 outlook, management has indicated a year-over-year room expansion pace of 5.5% this year, on a current base of nearly 1.3 million rooms worldwide.

Marriott's enormous global development backlog will take many years to work off. Still, investors have come to expect marginal advances in the number of pipeline rooms each quarter. Marriott's ability to approve hotel projects faster than it brings new hotels into service is a prized trend, and stakeholders will look for continued pipeline growth when the company's report hits the wires Thursday afternoon.

Why Travel and Leisure Stocks Sank on Monday
420%