Even if Berkshire Hathaway (NYSE:BRK.A) (NYSE:BRK.B) didn't have an absurd amount of cash on the books, there is always some speculation and guessing around what Warren Buffett might add to the portfolio. We don't have any inside information on what Buffett will do next, but Fools do love talking about stocks we think would be great fits for the Berkshire portfolio -- or for investors who like to find Buffett-type investments.

So we asked three Motley Fool contributors to each highlight a stock they think would be right up Warren Buffett's alley. Here's why they picked Waste Management (NYSE:WM), White Mountains Insurance Group (NYSE:WTM), and Alphabet (NASDAQ:GOOG) (NASDAQ:GOOGL). 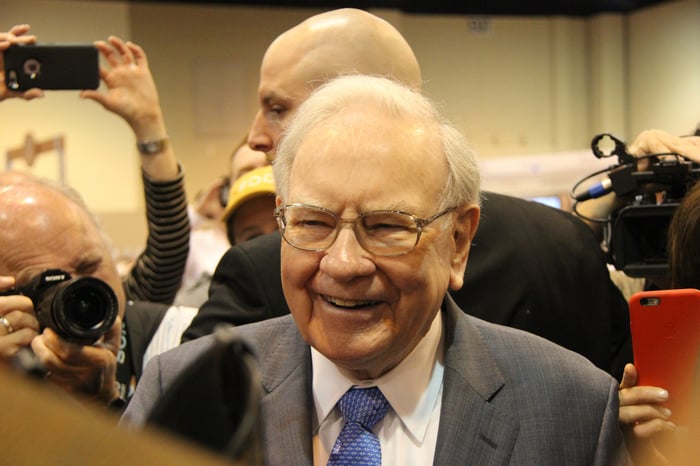 How could Buffett not love this trash investment?

Tyler Crowe (Waste Management): I have to imagine that Waste Management has come across Buffett's desk more than once. The waste-handling giant would be right at home in the Berkshire portfolio. The company has the perfect combination of a wide economic moat protected by scale and regulations, and a management team with a penchant to reward shareholders with dividends and buybacks.

Refuse handling is by no means a sexy industry, but that is part of the appeal for investors. It's a business with immense up-front capital expenses that also tends to run into lots of regulatory hurdles. That gives established players with enormous scale like Waste Management immense benefits. The company has been able to pass on price increases to customers for years because society is always producing waste that needs to be properly disposed of and there aren't a lot of options.

The company reported record profitability and operating cash flow in 2018 thanks to growing waste collection volumes and higher prices. It was able to return $1.8 billion in cash to shareholders in the form of higher dividends and buybacks. That one-two punch of shareholder returns has turned a seemingly boring stock into a market outperformer since the turn of the century. 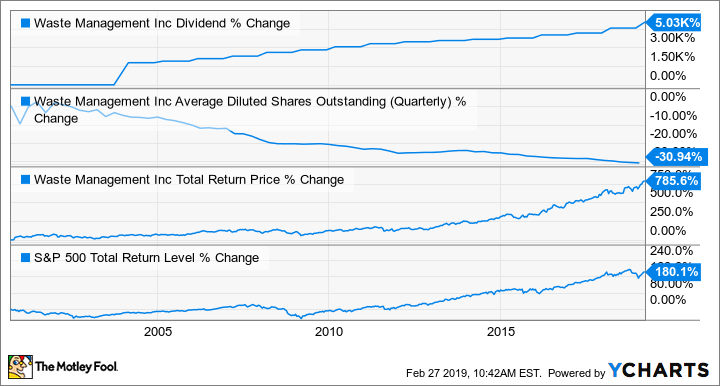 If there's anything that would keep Buffett away from Waste Management, it's the price. The stock doesn't trade at an unreasonable price -- its price-to-earnings ratio is 22 -- but Buffett has said that he would like to acquire an entire company, which means buying Waste Management would require a hefty premium on top of what it trades for today. If this stock were to go on sale, though, it would be a great fit in the Berkshire Hathaway portfolio.

As with most insurers, White Mountains' goals include increasing the premium and reinsurance business it receives annually. In 2018, despite a challenging end of the year from a financial investment perspective, the company's HG Global/BAM operations, which provide insurance on municipal bonds, delivered record highs in total premium and claims-paying resources. BAM's guaranty business was particularly strong with larger institutions in 2018, with the company noting that secondary market activity increased 21%.

What sets White Mountains apart as an insurer is the company's acquisition and investment activity. Even with a fiscally conservative management team intent on growing the company's book value, White Mountains isn't afraid to take major investments in, or outright acquire, other businesses to complement its insurance, reinsurance, and insurance exchange technology platforms. Inorganic growth is a quick means to a top- and bottom-line boost.

It also possesses a sizable investment portfolio, roughly two-thirds of which tends to be invested in fixed-income assets, with about a third in passive exchange-traded funds. A higher interest rate environment plays right into White Mountains' generally staggered fixed-income portfolio, while the long-term appreciation of the stock market allows the more aggressive equities portion of White Mountains' investment portfolio to increase in value.

Most impressively, the company's consistent repurchasing of its common stock is driving down its outstanding share count and pushing up its book value. Over the past decade, White Mountains Insurance's share count has been cut by two-thirds, while the stock's book value has tripled. This has all the hallmarks of a consistent business model Buffett would appreciate. 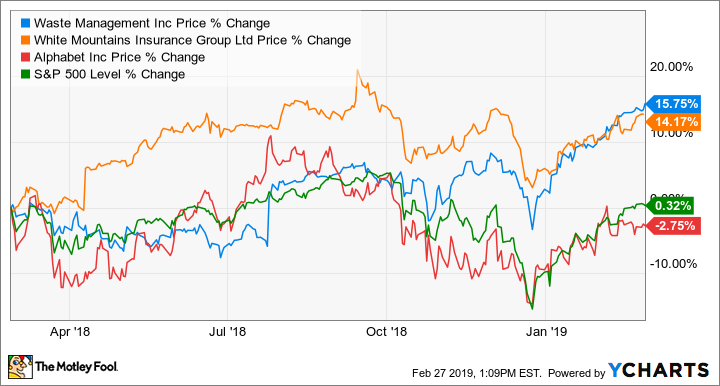 Buffett should buy some of this tech giant

Brian Stoffel (Alphabet): It's well known that Buffett doesn't like to invest in technology companies. He finds them difficult to understand and -- more importantly -- argues that it's tough to measure the moat surrounding tech players. When it comes to Alphabet -- parent company to Google -- however, I think it's ripe for a Buffett investment.

Berkshire Hathaway Vice Chairman Charlie Munger has already gone on record saying that Google has one of -- if not the -- widest moat in the business world today. It's easy to see why he would think that:

Some might argue that Alphabet, trading at over 30 times trailing free cash flow, is too expensive. But I would counter with another Buffett maxim: It's far better to buy a great company at a fair price than a fair company at a great price. Alphabet is one of the world's greatest companies, and prices today are more than fair.