High-yield stocks, or dividend stocks that dole out yields above that of the S&P 500 or an income benchmark like the U.S. Treasury Note, can hugely boost your income and build wealth in the long run. Of course, not all high-yield stocks are safe, but the ones that offer strong yields backed by a steady dividend payout -- even dividend growth -- are the ones that offer the highest return potential.

Fortunately for investors looking for ways to supplement their income, some top stocks in the market today are offering yields as high as 5% or more that look fairly sustainable in the long run. Plane leasing company Aircastle (NYSE:AYR), clean-energy play Brookfield Renewable Partners (NYSE:BEP), and pharma giant AbbVie (NYSE:ABBV) are three such dividend stocks our Motley Fool contributors recommend.

A stock that has plenty of airspace

Rich Duprey (Aircastle): Although the aircraft industry was slightly weaker last year than it was the prior two years, traffic still remained well above capacity by 6.1%, according to data from the International Air Transport Association. It also notes 2018 was the fourth consecutive year global airline profits exceeded $30 billion for the year, and it's forecasting this year's industry profits to hit $35.5 billion.

With that as the backdrop, investors should take a closer look at Aircastle, a leading aircraft leasing player. Leasing helps airlines meet their need for planes globally, and because business is so geographically widespread, when a particular market declines, another is likely to pick up, and analysts see it growing almost 5% a year for the next few years, hitting $62 billion by 2023. 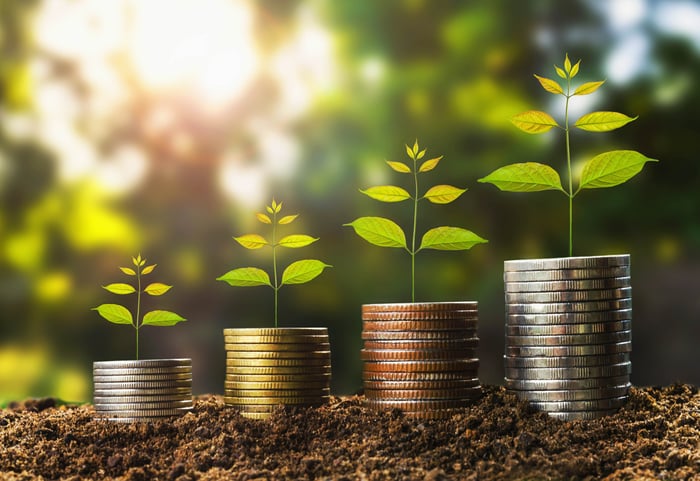 Aircastle reported fourth-quarter earnings recently that showed revenues grew 48% to $292.6 million, with adjusted net income rising to $109.9 million, or $1.43 per share, from $57 million, or $0.72 per share. It had some issues with Brazil's fourth-largest airline, Avianca Brasil, filing for bankruptcy in December, which should depress margins slightly in the first half of 2019. But that should right itself afterward, as Aircastle has placements for the aircraft it will eventually regain control of once that issue is resolved.

Aircastle has made 51 consecutive quarterly payments on its dividend, which currently yields 5.9%. It returned a total of $158 million to shareholders last year through a combination of dividend payments ($89 million) and stock buybacks (almost $70 million). It looks to be a solid business that should continue to take flight.

This is an industry you can't afford to ignore

Neha Chamaria (Brookfield Renewable Partners): The International Energy Agency projects renewable energy to contribute 12.4% to global energy demand by 2023 compared with 10.3% in 2017. Furthermore, within renewables, hydropower should be the largest, contributing 16% to the world's electricity demand in 2023. If there's any company best poised to ride the trend, it's Brookfield Renewable Partners. To top its growth potential, the stock offers a hefty dividend yield of 6.8%.

Brookfield is one of the largest pure-play renewable-energy companies in the world, with an installed capacity of nearly 17,400 megawatts. Hydroelectric sources generate 76% of its power, and the remaining amount comes from solar and wind. The company is coming off a solid fiscal 2018, having grown its funds from operations (FFO) by 18% in 2018, backed by capacity expansion and acquisitions. Brookfield invested nearly $550 million in growth during the year and advanced nearly 350 megawatts of power-generation projects from its pipeline.

Brookfield also made a smart move on its balance sheet last year by extending the maturity of its near-term debt, thanks to which it doesn't have to worry about any material debt repayments until 2023. Brookfield's financial fortitude and strong cash flows have rewarded shareholders richly over the years: The company increased its dividend by 5% last year, in line with its long-term goal to grow dividends by 5% to 9% annually. Brookfield has increased its dividends every year since it was established in 2011 after being spun off from parent company Brookfield Asset Management. If not for dividend growth, Brookfield shares may not have offered generous yields consistently.

Renewable energy undeniably has a bright future, and there's little reason to believe Brookfield won't benefit. For income investors, Brookfield Renewable makes for an incredible high-yield stock to own.

George Budwell (AbbVie): During AbbVie's first five full years as an independent entity, the company produced a total return on capital for early-bird shareholders of 333% (including dividends). The biotech's performance during this golden era was easily the best among its large-cap peer group, and it nearly doubled the returns of the broader biotech industry as a whole -- shown by the graph below. 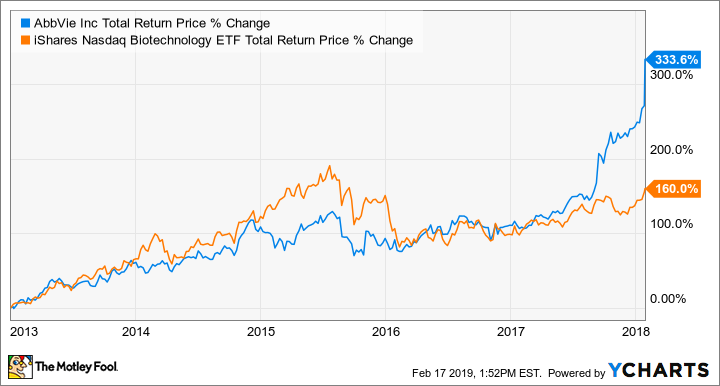 In the past year, though, AbbVie's stock has turned into a factory of sadness for investors. In fact, the drugmaker's stock has lost more than a third of its value since hitting a high-water mark in early 2018 -- despite additional dividend hikes and exceptional revenue growth over this period.

What went wrong? Investors are deeply concerned that AbbVie will be the next big biotech to struggle after losing exclusivity for a key product. AbbVie's main source of revenue -- Humira -- is currently facing biosimilar competition in Europe, and knockoff drugs could enter the American scene within the next four years as well.

While investors do have some solid reasons to fear this issue following AbbVie's setback in lung cancer with Rova-T and this year's projected drop-off in Humira's international sales, the deeper truth is that this top drugmaker is on solid financial footing.

The company's robust clinical pipeline is set to produce a bevy of next-generation products that most industry insiders believe will return the company to growth as soon as 2020. Meanwhile, investors can sit back and collect AbbVie's monstrous dividend yield of 5.32% as the biotech's next set of growth products continues to come online.