Please ensure Javascript is enabled for purposes of website accessibility
Log In Help Join The Motley Fool
Free Article Join Over 1 Million Premium Members And Get More In-Depth Stock Guidance and Research
By Anders Bylund – Updated Apr 15, 2019 at 10:06AM

The investment fund is very nearly a perfect proxy for investing directly in Alibaba. If you like that company, you'll appreciate this stock as well.

It's no secret that Altaba (AABA) is closely tied to Chinese e-commerce juggernaut Alibaba (BABA 0.33%). The investment fund's very name refers to an "Alternate Alibaba" strategy, after all. And at the end of the recently reported fourth quarter of 2018, a staggering 82% of Altaba's assets consisted of Alibaba shares.

So if you see Alibaba as a buy today, you would probably be happy owning Altaba shares as well.

OK, but is Alibaba a good investment?

Alibaba had a rough year in 2018 due to the high-level political trade tensions between Beijing and Washington. That conflict weighed down the entire Chinese economy, and a portion of Alibaba's goods end up in America via third-party sellers on online shopping platforms managed by Amazon, eBay, and Etsy.

To be clear, American resales add up to a rounding error in Alibaba's massive revenue. Seven hundred million online shoppers in China overshadow the exports beyond Chinese borders by several orders of magnitude. Still, the company does hope to expand abroad over time and the public perception of blocked trade channels can put the brakes on all sorts of business opportunities.

According to Joe Tsai, Alibaba's executive vice chairman, Chinese fiscal policies are geared toward sustainable business growth these days. Lowered sales tax rates are heading for more cuts in 2019, alongside lower social security contributions and higher standard deductions for individual taxpayers. The upshot of these changes is twofold for Alibaba. Like Amazon and eBay do in America, the company relies on a network of independent resellers to boost its marketing and basic sales operations. And when the average Chinese citizen has more money in his or her pocket, more of it can be spent on online shopping portals like Alibaba's Taobao and Tmall.

I like Alibaba's business prospects so much, I bought some shares very soon after the stock entered the U.S. markets. Today, Alibaba shares are trading at a fairly reasonable valuation of 27 times forward earnings. So far, so good -- Alibaba looks like a buy to me.

I still don't know what to make of Altaba!

Owning Altaba shares is not exactly the same as buying Alibaba's stock directly. The two stock charts have been tightly intertwined since Alibaba's debut in 2014 -- but they do diverge from time to time.

At the moment, Altaba shares have gained 75% since the investment fund's inception. Over the same period, Alibaba investors enjoyed a 96% gain. To put these returns into context, the S&P 500 rose 40% at the same time. 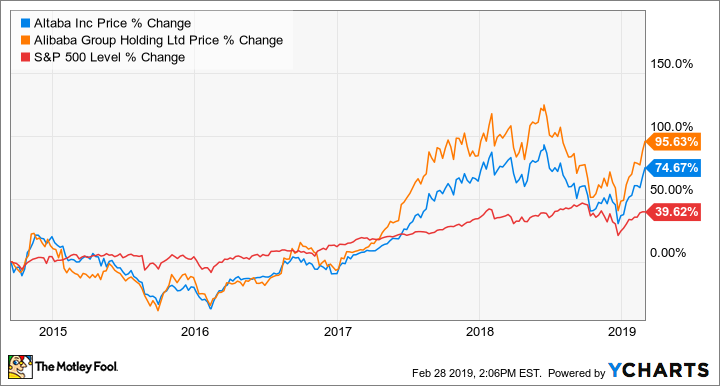 So you could argue that Altaba shares are trading at a discount to the underlying Alibaba stock nowadays. The main reason for any differences at all between these two tickers is that returning Alibaba-based cash to Altaba's shareholders in the form of buybacks and dividends exposes the cash flows to American taxes. The top task facing Altaba's management is finding a way to dodge those tax effects, especially the repatriation taxes that apply to corporate profits moving into America from abroad.

According to Altaba's own calculations, its stock is trading at a 26% discount to its adjusted net asset value. If you expect the firm to find an effective end run around the entire tax issue, that's about the size of the potential upside compared to simply buying Alibaba's stock.

If you don't see that happening anytime soon, or if you think there's a risk of higher repatriation taxes in the future, Alibaba would be the stronger bet. And for investors straddling the line between those extremes, there's nothing stopping you from picking up some shares of both Alibaba and Altaba.

Either way, you'd be smart to own one of these Alibaba-based stocks. These are two winning bets, separated by a thin layer of tax concerns.