Please ensure Javascript is enabled for purposes of website accessibility
Free Article Join Over 1 Million Premium Members And Get More In-Depth Stock Guidance and Research
By Natalie Walters - Updated Apr 11, 2019 at 10:40AM

Strong active user growth and Alipay have made Alibaba a force that not many can reckon with in China.

Alibaba ( BABA -3.95% ) has long been the top retailer in China, which boasts a population of 1.4 billion. But sometimes it's still difficult to understand just how big the company has become in the nearly 20 years it's been around.

To get a better picture of just how much of a juggernaut Alibaba is in 2019, here are two standout figures from its latest earnings report. 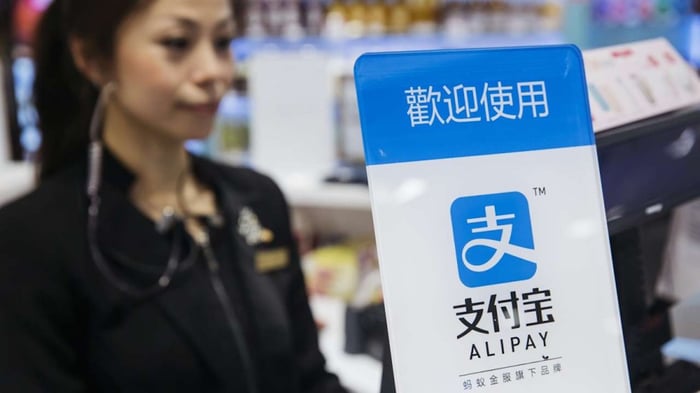 Alibaba's annual active consumers on its China retail marketplaces hit a record high of 636 million this past quarter, up 23% in the past year. The company added 35 million users just in the previous quarter.

You'd be hard-pressed to find a company that would make a good comparison with Alibaba in terms of users. That's because the company is so large that it acts as an online retailer, like Amazon.com, as a video streaming platform, like Netflix, and as a social network, like Facebook -- and that's just three of its many business arms.

However, it's still interesting to compare Alibaba to better-known companies, even if they aren't the same type of business or using apples-to-apples numbers. For example, Netflix has 140 million global subscribers, while Instagram Stories has 500 million daily users, and Facebook is up to an incredible 2.7 billion members.

Alibaba said 70% of the increase in its annual active consumers came from third-and-lower-tier cities in China. So, while Alibaba started in China's major cities, much of its growth is coming from less populated areas. To help with that, the company has been testing out a new feature that shows a simpler version of its platform to first-time or less frequent users so they aren't overwhelmed. As they become more comfortable with the platform and want more of what Alibaba has to offer, a more advanced version of the platform is shown to top users. Data the company is gathering shows this strategy is paying off.

Alibaba's digital wallet, Alipay, hit a milestone in mid-January, when it hit 1 billion annual active users. Just as Alibaba's retail marketplaces started in China's big cities and have spread, AliPay started in China but has been spreading around the globe. The service has members from more than 110 countries and regions worldwide.

The mobile market in China is dominated by both AliPay and WeChat Pay, from competitor Tencent. Together, the two platforms claim more than 90% of the market, according to consultancy firm Analysys.

Having the AliPay app played a significant role in helping Alibaba grow its active consumers. It did this by implementing a user acquisition program that uses referrals through the AliPay app to lead people to its online shopping platforms.

Taking advantage of its advantages

Alibaba definitely has an advantage of operating in the most populous country in the world. However, it's also been smart in the products it offers and how it tailors them to its customers. Creating different versions of its retail platform was key to reaching out to new users outside the most populous cities in China. And getting AliPay started in so many countries outside China has been the key to its growth. If Alibaba continues to change and adapt, it has a long and bright future ahead.