The company also controlled overhead expenses over the last three months, an outcome that was apparently well received by investors.

Below, let's review headline numbers from Tuesday's filing, as well as the salient details from the quarter and a look ahead at full-year guidance. Note that all comparison numbers in this article refer to the prior-year comparable quarter (the third quarter of fiscal 2018). 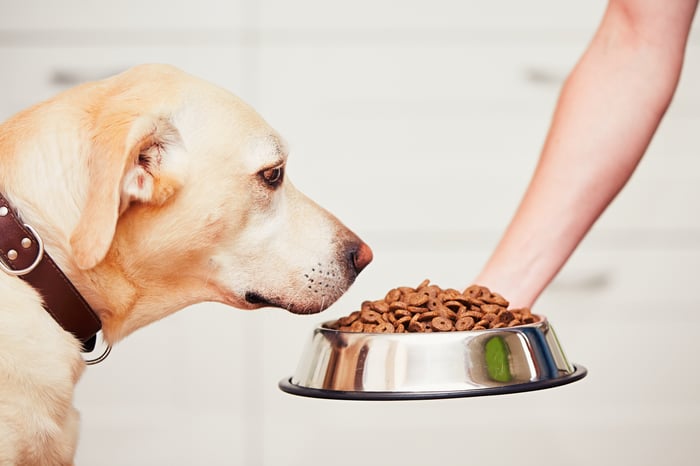 As Smucker continues to reshape its portfolio offerings via acquisitions and divestitures, investments in the market share of existing brands can often get obscured. During the company's earnings conference call, CEO Mark Smucker discussed the contribution of both acquired and existing brands to the quarter's organic revenue expansion:

We delivered strong sales performance for our growth brands, which increased 17% in the quarter. We also achieved strong growth for some of our leading brands, our core brands, demonstrating our ability to increase sales for both core and growth brands. Multiple brands in our pet business achieved double-digit sales growth, including Rachael Ray Nutrish, Meow Mix, Kibbles 'n Bits and Nature's Recipe.

Further Smucker's Uncrustables and Sahale Snacks also realized double-digit sales growth. While Dunkin' coffee achieved 9% sales growth, including strong performance across premium bag, and the recently launched canister offerings...With growth in a number of areas contributing to our third quarter results, we continue to make progress on our three consumer-centric growth imperatives of leading in the best category, building brands consumers love and being everywhere

Except for a slight tweaking of its expected effective tax rate, J.M. Smucker left its full-year 2019 earnings outlook, which it had previously trimmed by marginal amounts last quarter, unchanged.

The company still expects $7.9 billion in revenue for the current fiscal year and adjusted earnings per share of $8.00-$8.20. Following a credible quarter on both the revenue and earnings fronts, Smucker should be well positioned to meet its full-year targets with three months remaining in the fiscal 2019 year.