Virtual and augmented reality (AR/VR) have been an oft-talked about technology the last few years, but growth for the nascent industry has been hit or miss. According to research group IDC, global spending on AR/VR was an estimated $12.1 billion in 2018 -- a decline from the $14.1 billion spent in 2017, and a mere drop in the global economic activity bucket.

All of that could be about to change, though. IDC said it expects global AR/VR spending to increase nearly 70% to over $20 billion in 2019, and that annual compound growth will average about 70% each year through 2022. That would send the industry north of $100 billion in annual spending in just a handful of years. While a lot of focus is on gaming and entertainment, businesses could actually end up in the driver seat.

Breaking down the use cases

Consumer spending will likely remain the largest segment of the virtual-reality universe this year. IDC said the figure should be somewhere around $6.6 billion, with VR games making up $4.0 billion of those sales, $2.0 billion coming from movies and video, and $600 million from augmented-reality games (that's the real world overlaid with digital graphics via a phone screen or goggles).

Business uses are beginning to gain some serious traction, though. AR/VR-based training spend is forecast to be about $1.8 billion, online retail showcasing about $550 million, and industrial maintenance $400 million. In fact, AR/VR for commercial use should grow at over 100% over the next few years, while consumer spending is expected to be much more modest, in the 30% to 40% range. IDC thinks that just one use of AR/VR -- industrial maintenance -- will nearly overtake consumer entertainment in size by 2022.

An example of who's spending the money...and why

If virtual reality in the workplace seems far-fetched, think again. A case in point is retail king Walmart (NYSE:WMT), which recently reported big gains in e-commerce last year. The company isn't just making waves in digital retail, though. One of the highlights from the fourth quarter 2018 report was the launch of over 17,000 VR training devices last year.

That equates to a lot of virtual training, as Walmart further stated that 450,000 of its associates were trained at its nearly 200 "training academies" in the U.S. The retailer has been using Oculus Go headsets -- a subsidiary of Facebook (NASDAQ:FB) -- and training modules to recreate testy in-store experiences to train employees. If Walmart purchased the Go devices at the full price of $200 from Oculus, that would be $3.4 million in hardware sales last year.

Check out the latest Walmart and Facebook earnings call transcripts.

That $3.4 million price tag all by itself won't move the needle much for a multibillion-dollar enterprise like Facebook, but Walmart is just one example of a big corporation getting into the world of VR. Plus, ongoing spending on AR/VR content could really add up over the years. Someone has to create those training modules, and there are other applications for the digital medium, such as Walmart.com's recently launched "Buy the Room" capability, which allows online customers to virtually place merchandise in their homes to see how it would look before making a purchase. 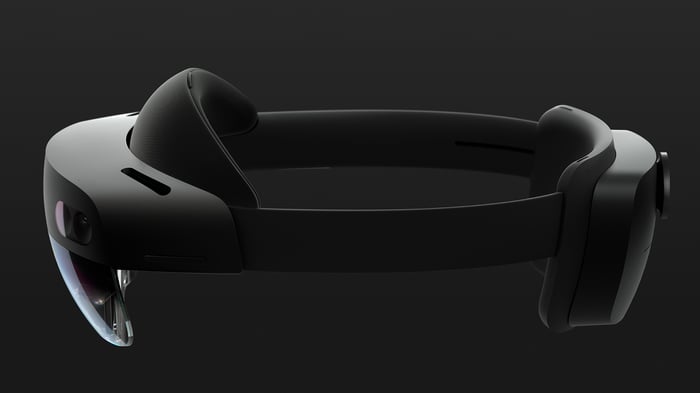 Of course, there are other horses in this race besides Facebook and its Oculus subsidiary. Microsoft (NASDAQ:MSFT) recently announced a second generation of its HoloLens project available for pre-order for $3,500. The sci-fi looking goggles are geared toward training, specifically for industrial companies and the military. The previous-generation HoloLens had limited success due to the high price and limited use cases, but as AR/VR expands, it could become a legitimate business segment for the software giant.

What's the upshot for investors? It may take a few years to show up as a meaningful financial result, but commercial adoption of AR/VR by companies like Walmart could mean the technology is a legitimate investment theme. As cloud-computing grows ever more important, stocks like Facebook and Microsoft should be the biggest beneficiaries of the movement.