Please ensure Javascript is enabled for purposes of website accessibility
Free Article Join Over 1 Million Premium Members And Get More In-Depth Stock Guidance and Research
By Chris Neiger - Updated Apr 10, 2019 at 10:37AM

T-Mobile's talked a lot about building a 5G network over the past year, but Verizon's advantages will be hard to overcome.

5G wireless promises to bring faster cellular internet connections and lower latency (speedier communication between devices and cell towers), as well as usher in new wireless devices and services. Investors looking for ways to benefit from 5G have their choices of chipmakers and wireless carriers that are poised to benefit from 5G.

However, while almost all U.S. cellular carriers are already talking about the possibilities of 5G, not all of them have the same potential to benefit. For example, T-Mobile's ( TMUS -1.77% ) management has talked extensively about 5G, but it has already missed some of its own goals for 5G -- and it's trailing Verizon Communications' ( VZ -1.14% ) 5G plans. 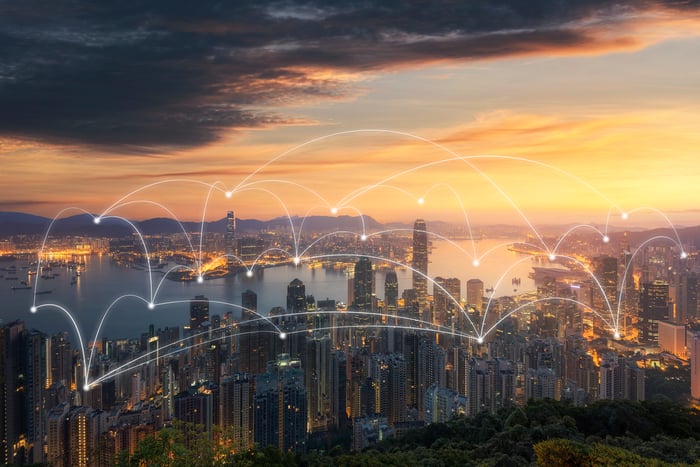 What T-Mobile's doing with 5G

Last year, T-Mobile said its 5G network would be live in 30 cities across the U.S. by the end of 2018. That deadline came and went, and the company hasn't yet launched 5G in any cities yet. But at the Mobile World Conference this month, T-Mobile CFO Neville Ray told CNET that one of the reasons the carrier hasn't launched the new network is that 5G devices aren't yet ready.

"We were hopeful, a year ago, that by this time, we would have a device. It's not there yet," Ray said.

While it's true that 5G smartphones aren't yet on the market, it appears that T-Mobile is still a bit behind its competitors in this space. In contrast, Verizon said just a few weeks ago that it would launch 5G in more than two dozen cities by the end of the year and already has a 5G home broadband service available.

T-Mobile says its 5G network will start coming online at the end of this year, but with the company already missing its own deadlines -- and currently focused on its proposed merger with Sprint -- T-Mobile may fall further behind its rivals.

Check out the latest earnings call transcript for Verizon.

Why Verizon is the better choice

Verizon said recently that it would launch 5G in more than 30 cities in 2019, with some coming in the first half of this year. The company had been cautious about being specific about some of its 5G plans, particularly as AT&T has taken some flack for claiming that part of its network is 5G-capable (Sprint says AT&T is stretching the truth and is suing the company over it).

While it's taking all of the U.S. carriers a while to build out their 5G networks, Verizon has an advantage because it'll be building out 5G on top of its already-robust 4G LTE network. The company consistently ranks at the top of independent studies for the best overall network coverage, and that should help it not only roll out new 5G connections (some of which will use new equipment attached to existing towers), but it will likely help convince more customers to join its network over its rival's as well. Verizon will, after all, be the first carrier to release three 5G smartphones on its network.

Verizon also has a lot of the millimeter wave spectrum that will be important for initial 5G connections. Verizon's purchase of Straight Path Wireless two years ago will help the company bring 5G devices to its network before T-Mobile and others.

Verizon's management has said that the company will spend between $17 billion and $18 billion in 2019 for capital expenditures, and it's likely that most of that money will go to 5G. The company believes 5G will bring $12.3 trillion in global economic output, and Verizon says it'll begin collecting revenue for both 5G mobile and 5G Home services in 2020. Investors should keep in mind that it'll take some time for these investments to pay off, though. Management has said that 5G sales for the company are "expected to contribute more meaningfully to growth in 2021."

This will take some time for everyone

It's worth mentioning that it's going to take some time for both of these companies to get their 5G networks rolled out to everyone in the U.S. One thing that might help boost T-Mobile's 5G future is if its merger with Sprint is finalized later this year. Sprint plans on launching 5G in four cities by this May.

Verizon's plans to flip the 5G switch in 30 markets this year will likely be a defining moment for 5G in the U.S. Verizon will have at least three 5G phones launching its network this year, and -- if it sticks to its proposed timeline -- it'll have the jump on many of its competitors with one of the largest 5G networks.