It isn't easy to grow when you're already a big player. Happily for The Hershey Company's (NYSE:HSY) investors, the candy and snack maker is poised to add to both its bottom and top lines this fiscal year.

Recently, Hershey CEO Michele Buck reaffirmed the company's encouraging guidance for 2019. If the company hits its targets, it'll indicate that its attempts at refreshing its business are working.

On the face of it, Hershey's growth predictions for this fiscal year are nothing to break the diet for. The company is anticipating that net sales will grow by 1% to 3% on a year-over-year basis, with per-share adjusted net profit rising by 5% to 7%. What's so encouraging about single-digit improvements?

Well, these estimates come at a time of transition for the company. It has been attempting to diversify away from its core classic candy brands (including the namesake chocolate bars and Reese's peanut butter cups). Last year it made two important acquisitions in the savory-snack segment: a $420 million purchase of Pirate's Booty maker Pirate Brands and a roughly $1.6 billion deal for Skinny Pop manufacturer Amplify Snack Brands.

These purchases were well considered, as they nab two strong, established players in their segment. They nicely boost Hershey's presence in grocery snack aisles, in addition to the candy section.

In fiscal 2018, the bulk of the company's nearly 4% revenue improvement was due to the incorporation of those brands -- the top line would have come in slightly lower without them. As far as we know, Hershey isn't including future acquisitions in its 2019 estimates, so the anticipated growth will come from existing assets.

Within the ever-important candy segment, Hershey plans to broaden and strengthen its offerings. For example, in a nod to increasing consumer health consciousness the company has devised a "Reese's Thins" version of the chocolate/peanut butter confection. 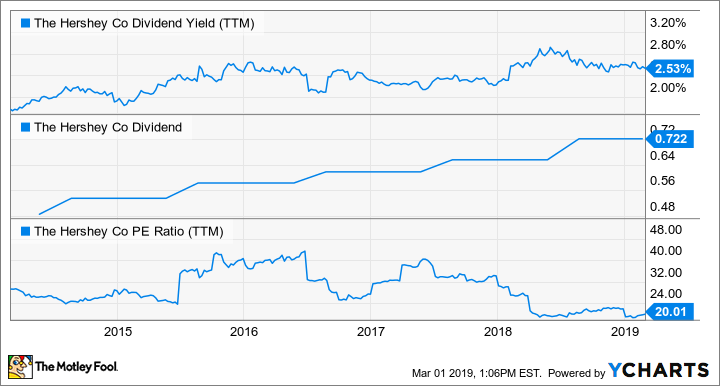 Yes, it's a bit ridiculous that consumers should consider this a "less unhealthy" alternative, but hey, it worked for Mondelez's (NASDAQ:MDLZ) classic Oreos line (in 2015, Mondelez rolled out -- yes -- Oreo Thins, now a mainstay on supermarket shelves).

Such a move folds into a broader rationalization initiative that shifts the product mix on shelves toward the company's more popular brands. A strong case could be made that Hershey has too many brands, and too many variants within some of these; efficiencies are to be welcomed, then. So expect to see Hershey and Reese's (its top two lines, by the way) become more visible in stores this year.

Lastly, the anticipated revenue improvement is also based on price increases the company has cautiously been rolling out since the beginning of this year, in part to mitigate higher costs. We don't have any hard data on the results of these price lifts. But given that Hershey is maintaining rather than shaving its annual guidance, we can conclude they aren't meeting too much resistance.

This, combined with ongoing cost-cutting measures, should contribute to improvements in fundamentals.

Check out the latest earnings call transcript for Hershey.

A big old ship like the S.S. Hershey or the RMS Mondelez isn't easy to steer into growth waters. So Hershey's management should be given credit for staying the course and executing well on its strategy (we might also probably salute Mondelez, which is facing some of the same headwinds yet still has a fighting chance to reach its 3% annual revenue growth target).

For many companies, Mondelez's 3% ambition or Hershey's 1% to 3% 2019 estimate wouldn't be much to get excited about. But in the case of the chocolate maker, that forecast indicates a company going in the right direction. I think consumers will be tucking into more Hershey's bars and Reese's peanut butter cups -- Thin or standard -- as this year goes on.