The day Canada announced plans to help NASA go to the moon, it's nothing but bad news for Canada's national space star.

Great news for space fans (and Canada fans)! Yesterday, Canadian Prime Minister Justin Trudeau announced that Canada will be going to the moon and assisting with NASA's planned 2028 moon landing project. Fans of Maxar Technologies ( MAXR -2.73% ), Canada's national space champion, might not be celebrating as much as everyone else, though. Its Q4 earnings report has thrown the satellite specialist's future into doubt. 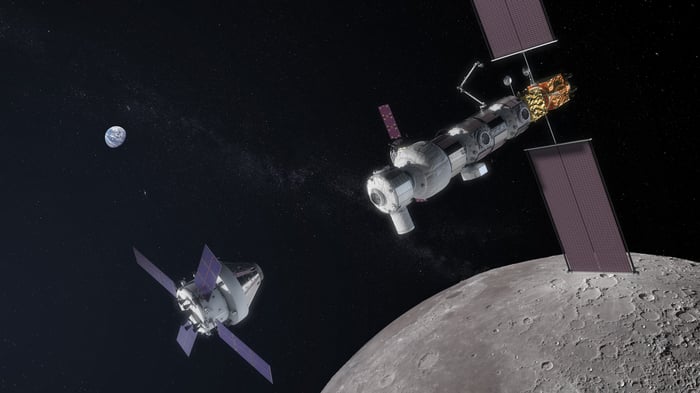 NASA recently announced an ambitious plan to return to the moon in less than a decade. In a three-phase proposal beginning just five years from now, NASA will build and put in orbit around the moon a space station called the "Lunar Gateway." NASA will then crew the station, dock various lunar landers at the station, and use these landers to shuttle astronauts to the moon's surface for exploration, and perhaps even eventual colonization.

This project is slated to begin just three years from now with construction of the Lunar Gateway -- and according to Trudeau, Canada will help with that, building a "Canadarm" to assist spacecraft docking with the space station.

The question now is whether Maxar will still be around to assist.

Click here for the latest earnings call transcript for Maxar.

Heading into Q4, analysts were cautiously optimistic. According to data from TheFly.com, consensus estimates called for Maxar to grow its revenue a respectable 12% (to $560.3 million) despite the loss of the company's WorldView-4 satellite in January. Earnings were expected to fall perhaps 7% to $1.06.

But Maxar reported nothing of the sort. Instead of growing 12%, sales declined by nearly 1%. And instead of earning $1.06 per share, the company lost $16.10 per share!

What can explain a disaster of this magnitude? As Maxar clarified in its earnings release, fully 87% of last year's loss was attributable to "impairment losses" taken to account for the failure of WorldView-4. But that isn't the company's only trouble.

Although Maxar's imagery and services segments continue to perform well and grow sales, its space systems segment is struggling through a "cyclical downturn in the GEO Comsat market," explained Chief Financial Officer Biggs Porter. (GEO Comsats refer to the market for very large communications satellites placed in geostationary orbit thousands of miles above Earth's surface, as opposed to low Earth satellites orbiting just a few hundred miles above our heads.)

New contracts, too, may be drying up, with Maxar's funded backlog shrinking by 27% over the past year, to just $2.4 billion. On the plus side, unfunded backlog grew by nearly $900 million, so if monies are appropriated to pay for that work, it would make up the difference -- but still show no growth.

Adding insult to injury, Maxar declined to give any guidance for fiscal 2019, which might have given investors some solace that things will get better. To the contrary, the comments executives did let slip in its post-earnings conference call with analysts were...disturbing.

Indeed, the one positive comment contained in Maxar's guidance contained a barb: "We do expect the first quarter to be lower than the succeeding quarters of 2019." But by promising investors that subsequent quarters will look better by comparison, management appears to be preparing them to expect the worst in Q1.

After all the bad news, new Maxar CEO Dan Jablonsky tried to sound a hopeful note for the future: "[T]oday we are announcing ... an organizational restructuring that will create a leaner and more agile business designed to ... drive improved profitability for the Company, with estimated annual cost savings of $60 [million]-$70 million." Even here, though, part of the cost savings will come at a cost to investors, who will see their quarterly dividend slashed by 97%, to just $0.01 a share.

So...is this the end for Maxar? The situation sure sounds dire. And yet, hope springs eternal. If Maxar can survive to see the start of NASA's Lunar Gateway project, then that can be expected to provide an influx of new revenue that could give Maxar new life.

It's a big if, but at this point, it may be all Maxar investors have left to work with.