Since the fiscal years of many companies coincide with calendar years, January and February generally see a lot of fourth-quarter and full-year results being released. It's a good time to be an income investor, because many dividend-paying companies also announce raises to their payouts early in the year.

2019 has not been an exception; a slew of companies fattened their payouts in the opening months, with either official declarations or pledges that they would do so. Three of the more notable raisers in the consumer goods sphere were Dividend Aristocrats PepsiCo (PEP -0.05%) and Walmart (WMT -2.50%), plus TJX Companies (TJX -1.19%). Read on for a closer look at each lift. 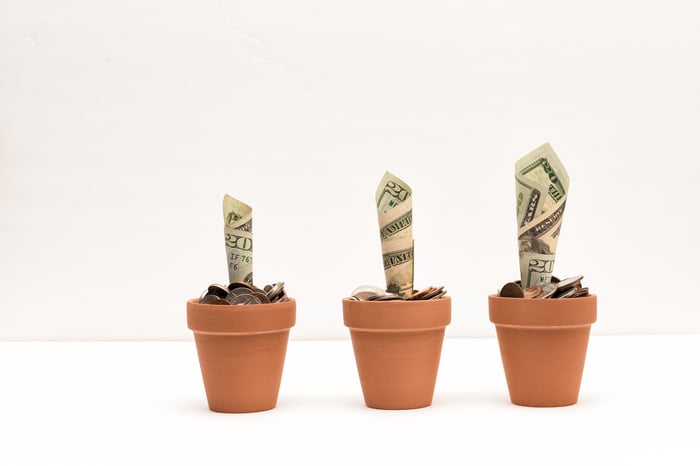 In the company's fiscal 2018, robust demand for Pepsi Zero Sugar, in particular, helped drive growth at the all-important U.S. beverage business. But PepsiCo's less-healthy options contributed too -- price hikes in the big Frito-Lay snack division helped lift total revenue by just under 2% on a year-over-year basis in the fiscal year to almost $65 billion. Profitability more than doubled, to $12.5 billion.

The company believes it can improve its results by pulling several different levers, such as a widening of the snack portfolio to satisfy different munching habits.

In February, PepsiCo increased its quarterly dividend by 3%, to just under $0.93 per share. The yield on the new payout is 3.3%, well above the 2% of dividend-paying stocks on the S&P 500. The company hasn't yet firmed any dates for the distribution; it said only that it expected to pay it in June.

Check out the latest earnings call transcripts for PepsiCo, Walmart, and TJX Companies.

As with the sugary-beverage industry, it seems the demise of retail has been exaggerated -- at least in Walmart's case. The company has engaged online retail with gusto: In the company's fiscal 2019, its take from e-commerce grew by a very impressive 40% on a year-over-year basis, which helped push total revenue up by nearly 3% for the full year. That's a healthy figure for a retailer so well established and sprawling.

Waging the e-commerce war is costly these days due to heavy competition; Walmart's profit margins from the activity need improvement (as the company admitted when unveiling the results). Consolidated and attributable net profit was down by 32% on the year -- at $6.7 billion -- still, the company beat analyst estimates in each of fiscal 2019's four quarters.

Walmart anticipates further growth, thanks in no small part to its vibrant e-store; it's guiding for revenue improvement this fiscal year similar to that of 2019 and (excluding the results of recent acquisition Flipkart) "low to mid single-digit percentage" growth in adjusted earnings.

Another brick-and-mortar store operator determined to avoid the retail apocalypse is TJX Companies, master of the off-price segment (the company owns the TJ Maxx, Marshalls, and HomeGoods chains).

While Walmart is ramping up its online sales, TJX is bringing more customers through the doors of its physical locations. The company cited that factor as the main one powering its fiscal 2019 growth; for the year, net sales rose by nearly 9% over 2018's result, as did net profit when adjusted for items like the extra dosh resulting from the government's 2017 tax reform measures.

There has been some concern about TJ Maxx's 2020 guidance -- the company is projecting per-share earnings growth of 5% to 7% for the year, which wouldn't match 2019's encouraging increases. Like Walmart, though, TJ Maxx is big and established, so these kinds of rates have to be considered above average.

TJX hasn't yet formally declared a dividend, but it announced it would increase its current quarterly payout by 18% to $0.23 per share (which would yield 1.8%). This is to be dispensed in June; the company wasn't more specific about the timing.