Walmart closed its acquisition of the Indian e-commerce company earlier this month.

Walmart (WMT 0.11%) completed its acquisition of a 77% stake in India's leading e-commerce platform, Flipkart, last week. India is one of the fastest-growing internet populations, has a growing demand for online shopping, and has tremendous potential considering the country's population of 1.3 billion.

But investors won't see any benefits for a long time. Flipkart is losing money.

Walmart previously forecast that it would lose between $0.25 and $0.30 per share on the acquisition with the assumption that it would close midyear. Prorated for the actual closing date, August 18, Walmart investors can expect a loss between $0.22 and $0.27 per share for fiscal 2019. Next year, management says it expects a headwind of about $0.60 per share. 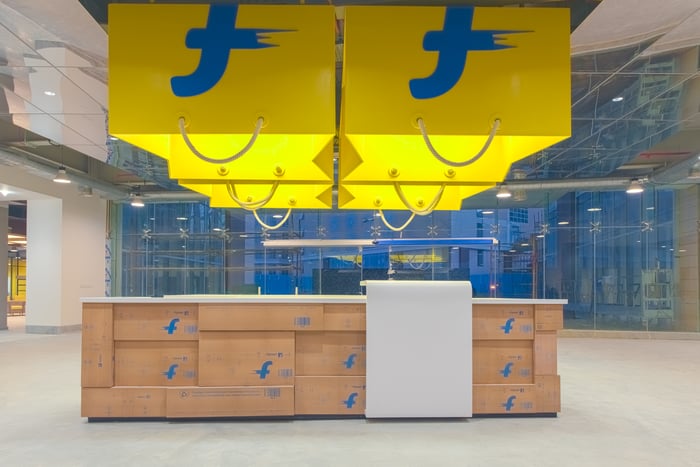 An investment in infrastructure

What Walmart is getting with Flipkart isn't just India's largest online retailer. It's also getting the fulfillment network the company has quickly built out over the last decade. That's a key ingredient if Walmart intends to take on Amazon (AMZN 0.25%) in India.

Amazon is currently India's No. 2 online retailer. It grew quickly in the country due to hefty investments in infrastructure and offering Prime memberships for just 999 rupees (less than $15) annually. Amazon is building dozens of new fulfillment and distribution centers across India every year. Amazon plans to have 67 operational fulfillment centers across the country by the end of the year.

Building out fulfillment centers to stay ahead of Amazon is key to the success of Flipkart. The local leader currently takes about 34% of online sales. Amazon, meanwhile, has a 27% market share. A little bit of math shows the two companies take over 60% of the market, which means they'll soon start competing head-to-head for market share instead of beating up on the little guys.

Investors shouldn't expect a slowdown in investment anytime soon. A strong fulfillment network can lead to outsized results. Look at how Amazon's fulfillment network in the United States has enabled it to dominate e-commerce in the market. Walmart has an opportunity in India that it missed in the U.S., and it's desperately investing in an effort to catch up.

Investing in infrastructure can have additional benefits if Walmart decides to continue its investment in physical stores. It currently has 21 stores in the country, but if it utilizes Flipkart's fulfillment and supply chain networks, it could expand more efficiently.

India's e-commerce market is expected to grow from $27 billion this year to $73 billion in 2022, according to estimates from Forrester. India will soon be a larger online commerce market than Australia.

That 29% average growth rate over the next five years is actually an acceleration from last year. That represents the rapid expansion of 4G wireless networks and the reduction in data prices India is seeing. As mentioned, India is one of the world's fastest-growing internet populations, and as more people gain access to high-speed internet, they'll do more online shopping.

Walmart generates revenue of more than $500 billion per year. The Indian e-commerce market alone is set to grow nearly $50 billion in the next few years. Even if Walmart can only manage to maintain Flipkart's market share at 34%, that's still a $17 billion increase in revenue over the next four years. For reference, Walmart as a whole has increased its trailing-12-month revenue just $26 billion over the last three years.

Of course, Walmart will have to keep investing in order to see those results. And those investments will be costly. But if it can manage to stave off Amazon, it will all be worth it. Investors need to have a lot of patience with this one.