Please ensure Javascript is enabled for purposes of website accessibility
Log In Help Join The Motley Fool
Free Article Join Over 1 Million Premium Members And Get More In-Depth Stock Guidance and Research
By Simon Erickson - Updated Apr 10, 2019 at 11:25AM

Is AI a game-changer for industries everywhere, or just a "seductive tool" distracting companies from achieving their greatest potential? We spoke with the CEO of one of the world's most innovative companies to find out.

Artificial intelligence has become one of the world's hottest investment topics.

A flood of graphics processing units (GPUs) provided by NVIDIA are helping companies to incorporate AI -- or more specifically, deep learning -- into their everyday business operations.

Deep learning can be thought of as a highly automated and super-efficient form of trial and error. A huge amount of data "trains" a neural network to correctly identify whatever the business is looking for at an extremely high level of accuracy. 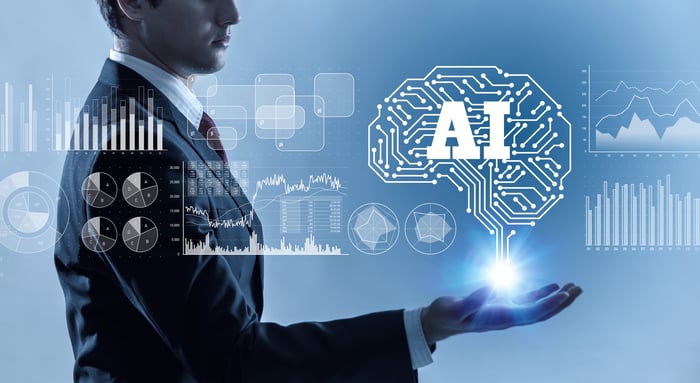 But other applications are less obvious. Alphabet (GOOGL -1.34%) (GOOG -1.29%) is training a neural network to allow computers to have actual conversations with people, and it is embedding the software as a feature in its newest Pixel phones. Artificial Solutions is building an enterprise grade conversational AI platform, which allows company chatbots to execute business tasks or to collect feedback from conversations with customers.

But is there a cost associated with those "better" decisions that artificial intelligence is influencing? The information collected by businesses is constantly changing, and there could be a danger in optimizing data that leads companies down the wrong path. Would Blockbuster have gone bankrupt more quickly if it used AI to maximize its store-level margins? What if AT&T used AI to optimize the operations of its wired telephone network?

In other words, are companies who use AI sacrificing their ability to be flexible?

To answer these questions, I recently reached out to Trend Hunter CEO Jeremy Gutsche. Jeremy has spent the past decade advising companies such as Samsung and Disney on how to shape their forward-looking strategies. He knows a thing or two about innovation and how to grow a business.

In his recent book Better and Faster, Jeremy describes optimization as "a seductive tool." Companies that focus too much on efficiencies miss out on developing breakthrough ideas, leaving them more prone to becoming disrupted by others.

In our conversation, Jeremy describes how AI could actually be one of the biggest risks to large companies. While AI is useful in certain circumstances, businesses still need to think outside of the box to remain innovative. He also explains the ways that companies can best capitalize on their new ideas.

A full transcript follows our conversation below.

Trend Hunter CEO Jeremy Gutsche: I've always been a fan of Motley Fool and I've been a subscriber, so I'm happy to be on the show.

Simon Erickson: Well, we're glad to have you, too, Jeremy. Trend Hunter has spent more than a decade now, advising large companies on how to innovate. You've worked with big companies like Coca-Cola, Samsung, Adidas and Disney.

But to actually kick this off, before we talk about innovation, I'm dying to ask you a question about optimization. Because we're seeing so many trends and buzzwords in the media these days about big data, and artificial intelligence, and machine learning. But in your recent book, Better and Faster, you actually described optimization as a seductive tool, which sometimes leads companies to be disrupted if they're trying to focus too much on efficiencies or margins. How do you see this optimization that's playing out in the world today? Is this an opportunity or is this a threat for those companies?

Jeremy Gutsche: Sure well, I'll kick it off with maybe a little history. 'Cause it's a topic I like. Henry Ford's the guy that said, "If I ask my customers what they want, they'd always want a faster horse." And Smith Corona, they got into the business of making computers with a joint venture partner Acer. But they got out of it to optimize typewriters and three years later were bankrupt. So optimization isn't always a good thing.

And what's happened now is, we have entered a state where we are experiencing history's highest rate of ideas, change, chaos. It means that managers, leaders start looking for those quick tools to cut through the simplicity and help them get their quarterly numbers. There are so many more tools available today that could help you tweak your little price or find your little win for a 2% or 5% boost in your year-end revenue. That's OK, but it leads to a world of optimization only, and blocks people from finding the breakthrough ideas.

If you block yourself from finding those ideas, you end up disrupted. If you look at the Fortune 500 list in the year 1950 and accelerate today, half of the companies are disrupted. That's gonna continue as a pace. Companies are failing to adapt, and I believe optimization is currently one of the biggest risks at its face, especially by larger companies.

Simon Erickson: OK, and you actually focus more on the innovation aspect of this. When you're speaking with companies in the workshops that you do, you're actually helping them how to not be disrupted. How to stay ahead of the curve out there. In your book, Better and Faster, you're kind of addressing two different things. One, the traps that are blocking companies and people from being innovative. And also the patterns that you've recognized of how to actually spot the opportunities to be innovative. This is a topic of course that's very interesting for us, too, as stock market investors at The Motley Fool.

What are the biggest takeaways that you've seen of who successfully innovates and who falls behind in the work that you've done over the past decade?

Jeremy Gutsche: Great question. And I should almost even just relate to your audience a little bit, to say I'm a chartered financial analyst. I ran analytics at a bank, I grew them a billion-dollar business. That's the world that I come from. So even when I talk about the risk of over-optimization, it's something I remember seeing at the bank. It's just so easy to grab on to a tool that just optimizes more easily.

The issue that I have with innovation is that it's not really taught as a core curriculum in school. It's not a regular program, not every company has a chief innovation officer or program. In our research and surveys, half of people don't even know who's in charge of innovation at their organization. The issue that you have is you entered an era where innovation is more important than ever before. But the tools, the tactics aren't really there. There's actually a PWC survey out right now, and this one gets repeated every year. It's mostly Fortune 500 CEOs, but 97% of those CEOs say that innovation is one of their pillars. It's one of the three, or four, or five things they're best at, it's in their DNA. Yet when we survey or research the leaders in those companies that are below that CEO, we find that half don't think that their Fortune 500 is on track when it comes to innovation.

So we spend a lot of time trying to study it, and I think there are many different methods you can put in place to make innovation actually happen. You see lots of companies out there that employ intense innovation programs. Whether it's a 3M or a Google where they have methods to find ideas, recruit them, incubate them along a pipeline. In our work, we spend a lot of our time in the up-front part of that pipeline to help people see which ideas are more likely to occur and more likely to succeed.

A lot of it stems from Trend Hunter, which is a site that I started when I was still at the bank, a long time ago. Twelve years ago. I coded up a place where people from around the world could share business ideas. Originally I only did it because I wanted to find my little business idea and I didn't know it might be. But I thought maybe a Trend Hunter in Europe, or a Trend Hunter in South America will submit a little idea that I could maybe bring to Canada or the United States.

What I didn't expect is the traffic would go from thousands, to millions, to billions. And because you now know that I'm a banker nerd, it meant that I started looking more for the patterns and started building analytic tools to study which ideas work and which ones don't. And over 12 years of that, I've started to learn that there are simply patterns that recur more often than not. If you use those patterns to look at your market or your ideas, you'd be more likely to win. But people don't use those patterns.

Not all of them are crazy, genius things I'm going to tell you. But the system itself works. As an example, if you look at ideas more likely to win, you'll find that more often than not, they exhibit one of six major patterns. They might be convergent, combining two different markets that hadn't previously been combined. They could be divergent -- people hate the mainstream and they want the opposite of that. It could be cyclical, which is that things like retro, nostalgia always come back. It could be reductive, which is that people like things that remove steps and make things that are leaner. They could be redirective, which means effectively something that's gamified or surprise or a little different than you expected.

And high level, what I look for, where I spend my time would be to look for patterns like that, that might help you shortcut your next big idea.