NetApp (NASDAQ:NTAP) has been around since the 1990's, when it primarily sold on-premise computer storage solutions. The company has reinvented itself as a cloud computing software business. In doing so, NetApp has orchestrated an epic business turnaround that has delivered real results for shareholders.

NetApp received seed financing from the legendary venture capital fund Sequoia and had its initial public offering in 1995. The company was founded as a network storage company, which sold hardware packaged with proprietary software. NetApp's stock flew to astronomical levels during the tech bubble where, despite merely generating revenue of $579 million in 2000, NTAP's stock achieved a market capitalization of nearly $50 billion. 19 years later, the stock price still hasn't recovered to those levels, serving as quite the lesson in financial excess! 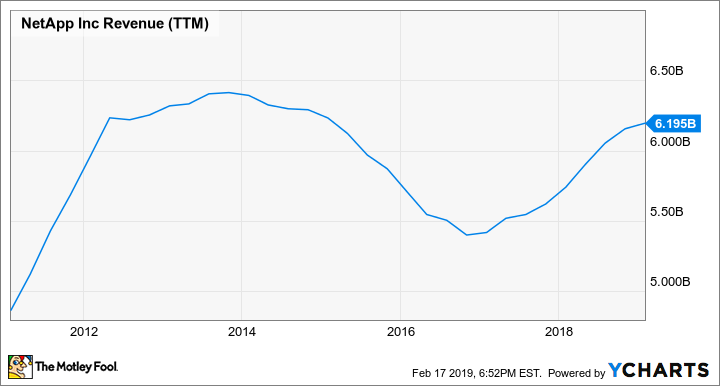 Despite the popping of the internet bubble, NetApp was a real business and continued to grow at a steady clip for the next decade. Around 2010, NetApp's business was disrupted by cloud computing companies. The world woke up one day and decided that cloud computing was the future. Unfortunately, NetApp failed to keep up with the innovators and revenue declined.

Check out the latest earnings call transcript for NetApp.

Recognizing a need for change, NetApp appointed George Kurian as CEO in 2015. Since his appointment, Kurian has led a remarkable turnaround. The company invested heavily in research and development. Between 2015 and 2018, NetApp invested over $3.3 billion in research and development or roughly 14.5% of total revenue over that time period. Furthermore, NetApp embarked on a significant restructuring which resulted in over 4% of employees being laid off.

Most importantly, NetApp studied the new competition and adapted. The company embarked on a massive product refresh cycle. While many competitors focused on being a provider for public or private clouds, NetApp released a flexible solution that lets customers choose to operate on a public, private, or hybrid cloud. Their software works with all major cloud products including Amazon AWS, Microsoft Azure, and Google cloud.

As a result of the company's intense focus on innovation, NetApp released industry-leading products. Gartner has named NetApp the #1 product in three categories: storage operating system, storage & device management software, and commercial storage for OpenStack. Customers have responded by buying NetApp's products over other vendors. NetApp is growing at a faster rate than industry peers and is taking market share.

The turnaround has resulted in revenue growth and higher margins which has translated into significant earnings growth. Being a software company, NetApp has little need to invest in capital expenditures. Therefore, earnings have mostly converted into cash flow. 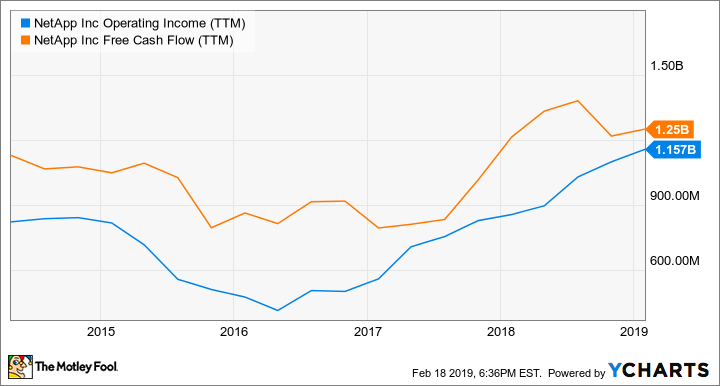 NetApp has used its growing cash flow to pay dividends, repurchase shares, and make strategic acquisitions. Its stock carries a dividend yield of 2.4%, and the company has repurchased nearly $4 billion in stock since 2015. The company has made a handful of modestly sized acquisitions, mostly acquiring interesting technology which it can bolt-on to its existing suite of products. 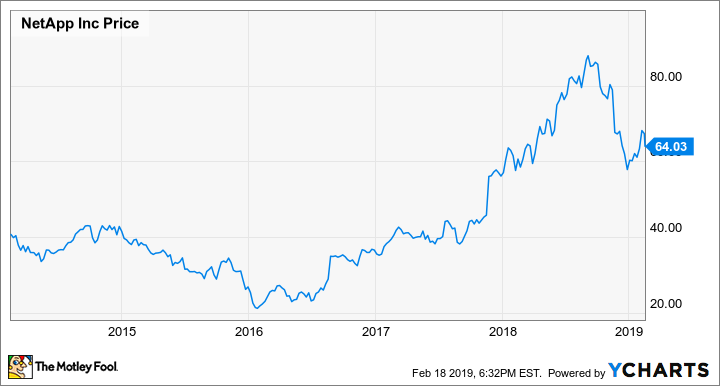 NetApp's turnaround has resulted in positive financial results. The company has returned much of its growing cash flow to shareholders, and the market has responded by sending the stock higher. NetApp and its management team have clearly done a great job and have been rewarded for it.

NetApp's turnaround is a good case study. Many companies respond to depressed stock prices by focusing on cost-cutting and share repurchases. Although by no means did NetApp's recovery occur overnight, the company demonstrated that an operational turnaround is achievable by investing in R&D and focusing on product innovation. While NetApp has been able to cut costs and return capital to shareholders, its stock price did not recover until revenue and earnings started to grow again.