The only thing WW (NASDAQ:WW) apparently has to offer investors is Oprah Winfrey. After reporting disastrous fourth-quarter earnings that featured guidance half of what the market was expecting, the weight-loss company formerly known as Weight Watchers announced it was dragging the megastar back into the limelight, making sure to note that she would "play a central role in our marketing campaigns."

However, if Oprah is the only weapon WW has in its arsenal -- and from the looks of the earnings report, it has little else -- the business and the stock still have more slimming down to do. 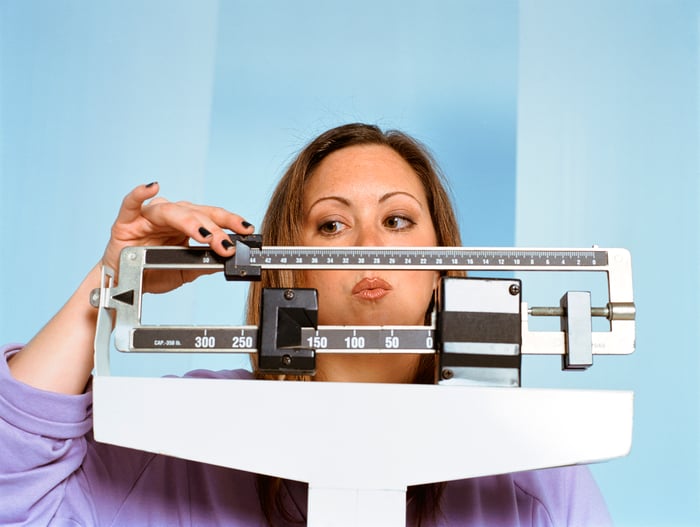 Weight Watchers missed analyst forecasts on the top and bottom lines by wide margins. Revenue of $330 million represented a 6% increase from last year, but it was below expectations for $347 million. Earnings of $0.46 per share were well below the consensus estimates of $0.60 per share. More troubling is that subscribers totaled 3.9 million at the end of the quarter, which, although 22% higher than last year, was 300,000 members lower than where that metric stood at the end of the third quarter.

After peaking at 4.6 million subscribers in the first quarter of 2018 in response to the launch of its so-called Freestyle diet program, which eliminated the need to count points on numerous food items, the member numbers have fallen steadily each quarter thereafter.

The slide also coincides with Oprah apparently scaling back her appearances in WW promotions. After showing up in ads last winter, Oprah didn't appear in any summer promotions, leading to speculation that she was more interested in tackling other projects despite a contract that runs through 2020 and having a seat on the board of directors. The company, though, denied the assertion, and President and CEO Mindy Grossman made sure to point out during the earnings conference call that Oprah will soon be front and center once again.

Check out the latest earnings call transcript for Weight Watchers.

It was, of course, Winfrey taking a 10% stake in Weight Watchers that launched a multiyear growth spurt for the weight-loss leader, seeing it regularly add new members at a brisk pace. WW's subscribers grew from fewer than 2.8 million in the quarter prior to Winfrey's investment in October 2015, a level they hit as the company was in free fall, to the 4.6 million peak last year, an increase of 64%.

Now the numbers are beginning to fall again, and WW is hoping that trotting out its most effective spokeswoman will turn the tide once again -- particularly as it doesn't appear actress Kate Hudson will be able to do it.

When WW announced late last year that Hudson would be the next celebrity to serve as brand ambassador following the birth of her baby, there was a social media backlash because it was argued she has never been someone who's struggled with her weight, and she owns the athletic-wear brand Fabletics, suggesting she would readily lose the 25 pounds she wanted to whether she was on a Weight Watchers program or not.

The company's other problem is in the name itself -- WW -- and the transition to more of a generic wellness-oriented message rather than one that seeks to empower members to make healthy eating choices. The rebranding isn't catching on, and Grossman admitted on the earnings conference call with analysts that its "Why WW" campaign "was not as effective at driving positive recruitment growth."

The impact is being felt on WW's guidance for 2019, where it expects to generate $1.4 billion in revenue, below analyst forecasts of almost $1.7 billion, while targeting earnings of between $1.25 per share and $1.50 per share, a far cry from the $3.36 Wall Street was predicting.

When all you have is one arrow in your quiver to try and make a difference, it shouldn't be surprising that your aim falls wide of the mark.